The Dovpo Blotto Single RTA is another design collaboration with the vape reviewer Vaping Bogan.

Previous versions were the original Blotto RTA and the Blotto Mini RTA.

What To Expect From The Dovpo Blotto Single RTA…

Although the original Blotto was compatible with a single coil build this version is specifically configured to be single coil only.

Also there have been some improvements due to feedback from vapers – always good to hear!

These improvements include redesigned all metal posts, a more rugged bottom section and the Airflow control ring has been updated.

The original deck posts had an insulator to the rear – whereas now they are all metal.

As you can see the all round honeycomb airflow inlets are still a feature but are more compact in the Single to encase the single coil as much as possible.

The base of the tank features the adjustable honeycomb airflow inlets with an improvement to prevent the ring skipping over the stops.

As this is designed for a single coil the wicking ports have also shrunk to make the most of the area available and provide the best wicking possible. A 1/4 turn screw off top cap gives access to the refill ports.

There are different capacities depending on which area you purchase the RTA from – in standard format you get a 5ml Glass Bubble tube and a 5ml PCTG Bubble tube, the 2.8ml straight glass is installed already. In TPD regulated areas you get the 2ml straight glass – I think! Bit hard to work out which goes with which version!

Here is a sweary introduction and build video from the Vaping Bogan YouTube Channel.

There are 3 colours to choose from: Black, Gunmetal and Stainless Steel.

I really am not sure about that tank base, the drilling of the honeycomb airflow inlets seems to really clash with the pattern on the base? Is that just me or does it look awful?

Anyway let me know what you think of the Dovpo Blotto Single RTA in the comments below! 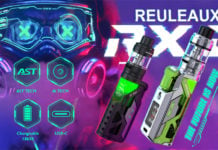