The Dovpo Nickel is a new release from Dovpo.

Dovpo have been knocking out some great stuff lately – the Topside Squonk mod, the Basium Dual Squonk Mod and the popular VEE.

Apparently the mod has a full Zinc body and the side panels are PC. The mod internals are also plastic with plenty of ventilation. This should help to keep some of the weight down too. You will need 2×18650 batteries which are not included and the maximum output is 230W as the name rightly says. On the side of the mod is the 0.96in colour screen surrounded by the fire button, adjustment buttons and the Micro USB port. It is a shame the 510 atomiser connector is off centre as the mod is 28mm wide so you could have used some of the bigger tanks on this if it was in the centre.

The mod body comes in 4 colours – Black, White, Red and Blue. Then you can select the panel style you wish… 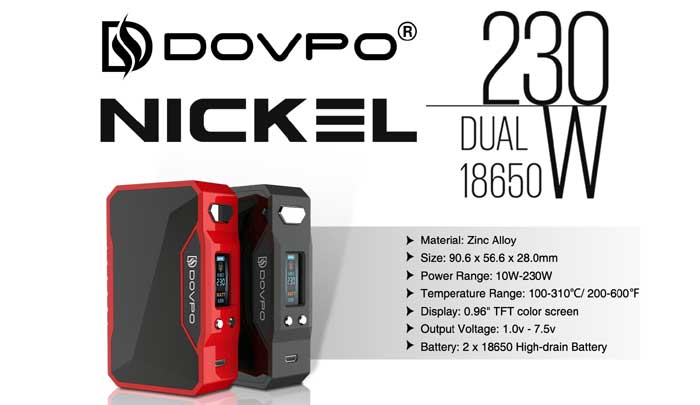 I do like the looks of this – especially with the black side panels – nice and Shiny Shiny!

Can you spare a Dime to buy yourself the Dovpo Nickel 230W Mod? Let me know your thoughts in the comments below!