US Politicians Urge Trump To Ban ALL Flavoured E-Liquid

A cross party group of US politicians has written to President Trump demanding he stays on track and confirms a total e-liquid flavour ban.

The letter accuses Trump of allowing kids to be used as “guinea pigs” and say the current so called “teen vaping epidemic” is a public health crisis.

The group has 28 members and is calling itself the Congressional Caucus to End the Youth Vaping Epidemic – catchy – and is made up of both Democrat and Republican politicians.

Today [Wednesday] the House Oversight subcommittee, the chair of whom is one of the signatories, will be holding a hearing to grill a senior FDA representative about any flavour ban plans.

They’re also annoyed the vaping industry was ‘allowed’ to attend Trump’s recent round table vape summit at the White House – I guess that says it all about the rabid anti-vape crowd of America!

Senator Dick Durbin – a crazed anti-vaper is among the authors of the letter, but Rep Raja Krishnamoorthi appears to be the media face of the caucus.

He’s popped up all over US media tripping out the tired old lines:

The truth is that for years flavored e-cigarettes were used to hook kids and have played an instrumental role in getting a generation of youth addicted to vaping and nicotine.

The vaping industry is already trying to lobby to create an exclusion and exemption for mint and menthol in the Administration’s pending flavor ban.

Mint and menthol must be included in this ban.

There is a reason why mint is in our children’s toothpaste.

This caucus will serve as the premiere forum for like-minded leaders to discuss and craft legislative solutions to prevent youth e-cigarette use, decrease addiction and save lives.

Listen, banning flavours won’t save lives it will kill more people as vapers return to smoking and smokers have no where else to go.

The fight against vaping is rapidly becoming the new reefer madness.

Just as prohibitionist-minded campaigners used dodgy statistics to fuel the failed war on drugs, so-called progressives are pushing for broad bans with no care or concern for adult smokers or the black markets that will inevitably be created.

And we all know how that will end – deadly THC cartridges anyone?

As we inch closer to 2020 – the year of the PMTAs – the future of vaping in America is balancing on a knife edge – sad but true.

India’s Parliament has voted almost unanimously to completely ban all e-cigarette products from the country.

There were a few dissenting voices with some politicians asking the question “why lit tobacco hadn’t been banned”.

Good question, however it doesn’t take a rocket scientist to work out it’s all about the money honey.

12% of the worlds smokers live in India which equates to 120 million smokers making the Indian Government a lot of tax revenue.

India is also home to 96,865 tobacco farmers – again important revenue for the Government.

Prior to the vote – Prof MV Rajeev Gowda made an impassioned plea backed by hard hitting scientific facts to over-turn the vape ban:

Great speech that sadly fell on deaf or some might say ignorant maybe even corrupt ears.

One politician told the Indian media:

People are smelling a rat in the way this Bill has been brought hastily.

A ban or prohibition, as we have seen everywhere, results in underground activities.

It results in criminalisation of the society.

It results in the creation of a mafia that deals with the underground activity.

However the ignorance from the majority of the politicians was astonishing [smell a rat?] with Harsh Vardhan declaring:

Any comparison about their adverse health impacts with tobacco is misplaced.

There is also no conclusive evidence to suggest that e-cigarettes are less harmful than conventional cigarettes.

On the other hand, there is definitely an emerging evidence all over the world that e-cigarettes have significantly harmful effects on health.

As I said in my article: The India Vape Ban Is Nothing Short Of An Act Of Democide – the Indian Government has blood on its hands.

To support the fight against the vape ban check out my interview with the The Association of Vapers India – sign up and donate.

Next FDA Boss ‘Cagey’ On Vaping

Stephen Hahn looks likely to be the next commissioner of the FDA and anti-vape groups are already worried he may support vaping.

The Senate Committee voted 18-5 for Hahn to be considered, however there’s still a few bits of red tape to tie up before he’s announced officially as Trump’s man for the job.

Anti-vaping pressure groups say they’re concerned Hahn has so far refused to be drawn on whether there should be a total vape ban. Mitt ‘the twit’ Romney – about as anti-vaping as you can get – begrudgingly voted aye but afterwards said:

I’m concerned we have a massive public health emergency with vaping and because this has political implications, we may not do right by the American people.

I do intend to insist he communicate how his decisions are being made with regards to this epidemic.

Hahn is currently the Chief Medical Executive of the MD Anderson Cancer Centre.

He has been quizzed in the media over his thoughts about e-cigarettes, and has been quoted as saying:

This is an urgent crisis – tobacco and nicotine, we need to take action.

Nothing is more important than protecting our youth.

Typical politicians answer…as in words that please and mean nothing…

You might remember that former FDA supremo Scott Gottlieb arrived as the saviour of the vape but crumbled under pressure.

It will be interesting to see if Hahn is man enough to fight off the screeching anti-vape soccer moms and politicians.

Bangladesh looks likely to be the next country to implement a total vape ban.

The announcement came earlier this week and is being brought in on the back of the deaths and illnesses reported in America.

As the whole world knows now – that outbreak, known as, EVALI, was due to a batch of deadly contaminated THC cartridges bought from drug dealers.

However, that information seems to have been missed by the country’s politicians.

We are actively working to impose a ban on the production, import and sale of e-cigarettes and all vaping tobaccos to prevent health risks.

Smoking is the biggest cause of death in the country, with a staggering 35% of adults from the age of 15 classed as regular smokers.

This equates to 113,000 people dying from lit tobacco and a further 23,000 dying from passive smoke.

Shocking figures and now much healthier none deadly e-cigarettes look likely to banned.

The decision by Apple to ban all vape related apps on its platform has been slammed by a major marijuana manufacturer.

Apple pulled the plug on 181 apps recently, but premier pot company Canopy Growth says this was a “knee-jerk” reaction.

They say the current rash of deaths and illnesses in the USA has now been shown to be linked to deadly THC cartridges – see above – and there’s no reason for the ban. It’s unfortunate that Apple made the decision to cast a very broad net and take down all vaporizer-related apps.

It’s a bit of a knee-jerk reaction that really stems from the unregulated space that is in the U.S. right now.

Apple wouldn’t be drawn on the issue, however a statement from last week didn’t hold out much hope with a spokesman saying:

Apps that encourage consumption of tobacco and vape products, illegal drugs, or excessive amounts of alcohol are not permitted on the App Store.

If you hadn’t noticed, the voting is now open on our vaping industry standard vape awards.

I’ve had a long hard look at the those in the running and can see it’s going to be close call once again in many categories.

Whilst some look done and dusted all ready! 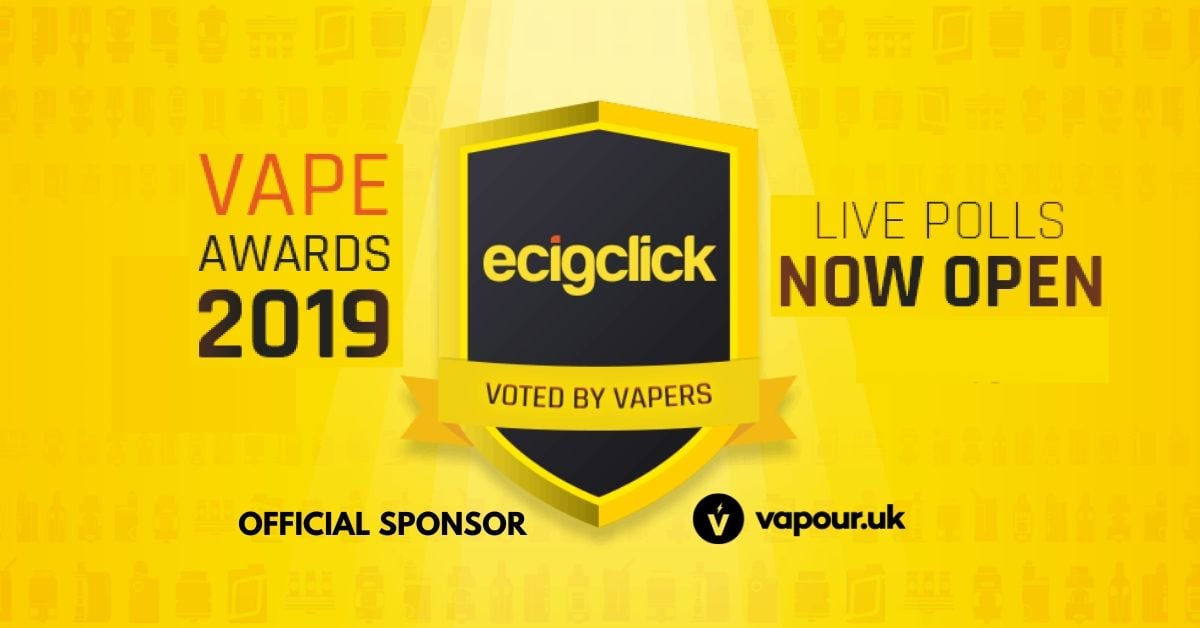 As always the winners have been nominated by you the vapers and of course the voting is down to you guys and girls too.

So don’t turn around in 2 weeks time and complain about the winners if you haven’t voted!

Go vote now – and of course share all over social media 🙂

And a bit of an ironic vape meme to end with 😉 Bit of a quiet Vape News today – if a little negative – hopefully those last two vaping memes put a tiny smile on your faces!