Vaping saves lives and a new study proves it.

Data collected by the Smoking Toolkit Study, shows e-cigarettes can save as many as 70,000 lives here in the UK per year and suggests the number is probably higher.

They show how when vaping numbers rise – the amount of smokers dropped and significantly when the number of UK vapers plateaued in 2015, the number of successful quit smoking attempts dropped.

When crunching the numbers researchers found that e-cigarettes had saved the lives of between 50,700 to 69,930 smokers – incredible!

Our new time series paper published in @AddictionJrnl found that in 2017 around 50,700 to 69,930 smokers had stopped as a consequence of e-cigarettes who would otherwise have carried on smoking https://t.co/KjU4m6Lcim@robertjwest @jamiebrown10 @SusanMichie

This study builds on population surveys and clinical trials that find e-cigarettes can help smokers to stop. England seems to have found a sensible balance between regulation and promotion of e-cigarettes.

Marketing is tightly controlled so we are seeing very little use of e-cigarettes by never-smokers of any age while millions of smokers are using them to try to stop smoking or to cut down the amount they smoke.>

Once again a case of “are you watching America?”

Judges in two separate US states have overturned the current ban on flavours and vaping in general and more could follow.

Last week both the bans in Oregon and Montana were given a temporary ‘stay’ and a judge in Massachusetts will be asked to lift a similar ban tomorrow [Monday].

This makes a total of 4 bans now overturned and the Vapor Technology is doing an amazing job in fighting for vapers rights.

The victory in Oregon came just 48 hours after the ban came into place with one vape shop owner saying it had saved at least ten jobs in his shop.

Petitioners assert, as a result of the rule, they, along with number other similarly situated businesses, will be forced to close within weeks.

It’s now up to the petitioners to reverse the decision with Kidd saying:

…pending the petitioners having the opportunity to reply, and the court considering the parties’ filings and rendering a decision on the motions.

The decision only affects nicotine and none nicotine vaping products, however the ban remains fro flavoured THC and marijuana products.

Governor Kate Brown had ordered the ban on October 4th and her office says despite the judgement it will still be looking at how to implement a full flavour ban.

Meanwhile in Montana, District Judge Jennifer Lint, also lifted the state’s flavour ban due to come into force next week.

The judge will reconvene the hearing on October 3oth while she considers the facts and even if Governor Steve Bullock’s ban was legal.

And in Massachusetts, Judge Douglas Wilkins says he will have a decision on the state’s proposed vape ban tomorrow [Monday].

Dr. Michael Siegel, a professor at the Boston University School of Public Health, gave evidence at the hearing and said any such ban would drive vapers back to smoking.

And of course we shall let you know the outcomes.

Let’s hope these small victories are a sign of things to come.

There’s no word from the Canadian Government yet, however the country’s main cancer charity says it has seen the new regulations on all things vape.

The Canadian Cancer Society says the new legislation includes province by province laws that include age restrictions, a limit to advertising and promotion as well as the ominous warning that some flavours could be banned.

Not all the provinces have brought in regulations thus far though British Columbia’s rules look to be the standard and the bans include:

Let’s hope whatever new regulations are brought in – they remian sensible.

and finally…Vaping Halloween Costume With A Message!

I found this on the superb vaping Facebook Group – Vape Strada.

So if you’re a vaper and want a trick or treat…then why not dress up as this! 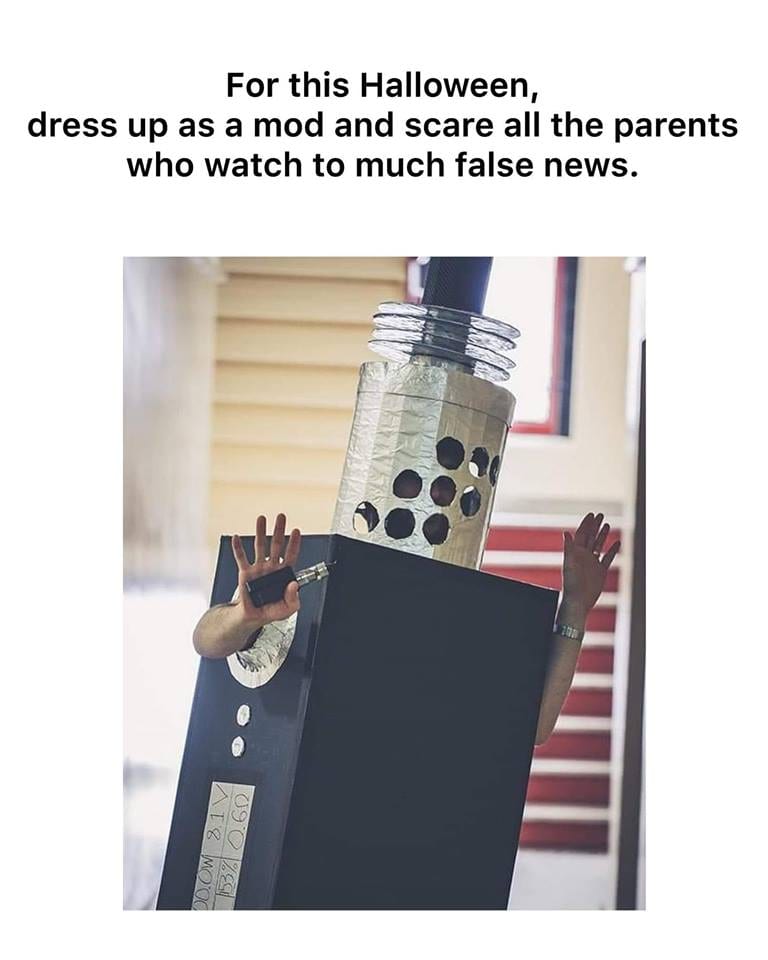