Ecigclick
Home Interviews Aden Little Bro Vapes Chats With EcigClick – Yo! Yo! Yo! OR...

Aden Little Bro Vapes, is known for his often hilarious yet always extremely polished vape reviews on YouTube and of course his catchphrase: Given it’s Christmas, shouldn’t that be Ho! Ho! Ho!

One thing’s for sure plenty of vapers know Aden and at October’s UK Vaper Expo, I spent a fair amount of time with him in the bar as part of my ‘networking’…

Our long and interesting chat was peppered by a seemingly endless amount of vapers popping over to shake his hand – get a photo – thank him for his reviews and of course all arrived with a hearty Yo! Yo! Yo! lol.

He’s a popular man let’s put it that way!

And nope that nice guy persona is not an act – far from it.

He’s a genuinely lovely bloke with a heart of gold and a smile never far from his lips – neither was a beer from what I can remember about our session in the Expo bar lol.

So I thought who better to kick off our Christmas interviews than Aden!

So enough from me – over to the jolliest man on the UK vape review scene and why Christmas for Aden means Family with a capital F!

First up a little about yourself how old are you – are you married – single – looking?

Happily married to Louise for 10 years with 3 wonderful kids Holly, Daniel and Fern, and we can’t forget old Zak the dog who’s my border collie. Where in the world are you?

I’m in God’s country South Yorkshire in a village near Doncaster.

Me and my wife run an entertainment agency called Madman Entertainments putting acts into different venues.

I was a professional singer for 20 years I changed this when the kids started getting older and now I’m more of a DJ.

When How and Why did you get into vaping?

I first started in 2006 when the first smoking ban came into place in Wales.

The band were booked to perform on Saturday night in Swansea, and the night before after a local gig we stopped off at the petrol station and there in front of me near the chewing gum was a e-cig which I’d heard a little about.

It was a cig-alike device that was black glow-up blue at the end (keep it clean people) and took cartridges of high, medium and low they also only did tobacco flavor.

I stopped and started vaping and dual used for several years but after I had a mini-stroke I completely stopped in 2016. Can you remember your first set-up? And what is your go-to juice/mod and tank nowadays?

As I’ve mentioned my first setup was cig-alike can’t remember the name but my first real setup was an IPV mini 2 and a aspire Atlantis 2 sub-ohm tank which I still have.

As for my go-to setup now it changes daily being a reviewer I’m constantly changing my juice, mods, and tanks but I do have a guilty pleasure of the Rochford Project Lemon Lush.

Why and when did you start the YouTube channel and how’s it going?

After my mini-stroke in 2016 my brother (SoulOhm who’s also a reviewer) was on a show called Last of the Summer Vapes with Adam (GBV) on the VUKN network on YouTube.

One week Adam couldn’t make it and Mark asked me if I would like to step in and cover which I did and loved it they asked if I wanted to stay as a permanent caster which I did for 2 and a half years until it stopped.

In Jan of 2017, I said to the lads I fancied starting reviewing and the rest is history!

I’ve been lucky to have been voted in several top awards like the EcigClick top UK reviewer/YouTube channel and have gotten in the top 10 two years in a row.

Also being voted in the same category in the Vapouround awards was amazing too.

Having my name mixed with some really big names and me having such a small channel compared to the rest in the voting I was so humbled.

Big love to all my subscribers without you this channel is nothing. 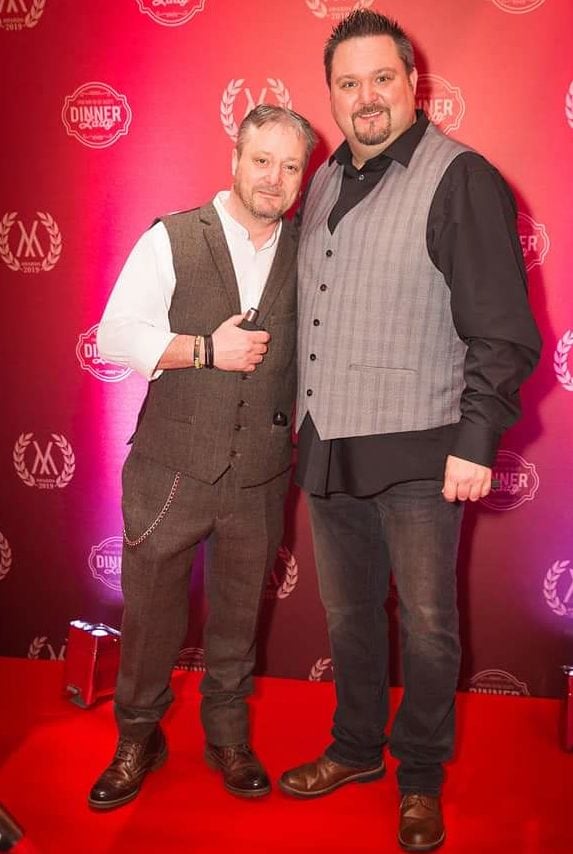 What does Christmas mean to you and how will you be spending it?

For a lot of years, Christmas just meant a lot of stress for me as it’s the main time for entertainers, but over the last few years me and my wife have changed that.

We have a massive Christmas day with all the family around our house – normally 12 to cater for with lots of fun and games afterward. What’s your favorite tipple at Christmas?

OK OK, we all know I love a beer but my favorite tipple at Christmas is Morgan’s spices and coke.

A Fairy Tale of New York or Mariah Carey’s All I Want For Christmas – and why?

All I want for Christmas Mariah Carey.

I love this tune getting the kids and Louise up to dance around the living room like nutters.

Santa’s just emptied his sack all over you – what do you hope you’ve got and why?

I don’t want this to sound corny but I’m happy with what I’ve got, my family’s been through some very tuff times over the last 7 years losing my mum, Louise getting cancer (and beating its arse) and me having a mini-stroke.

As long as my family are here and well I don’t need anything else. Apart from your other half – who would you snog under the mistletoe and why?

Being an 80’s kid it’s got to be Kelly LeBrock from Weird Science the film – but don’t tell Louise!

And finally…you’re able to take over the Queen’s speech for one day – what do you say?

Respect one another and don’t forget laughing is the best medicine!!

A big thank you to Jonny and Neil from EcigClick for asking me to be a part of this.

A big shout out to all my subscribers and followers thank you for all your support.

BIG LOVE TO EVERYONE HAVE A GREAT XMAS YO YO YO!

Thanks Aden and a Very Merry Christmas To You and Your Family!

Cheers mate [literally lol] I appreciated that and of course the copious amounts of Guinness at Expo!

One thing though, as a former professional singer and now DJ – how the heck he can put Mariah Carey above the Pogues baffles me…

On behalf of Jonny, myself and the whole EcigClick team I’d like to thank Aden for taking time out from his busiest time of the year to chat with us – thanks mate.

I can imagine Christmas at the Crew’s is a fantastic – happy – proper family Christmas time – have a great one guys!

And of course his excellent live stream – Three men and A Vape Show – that often has some amazing guests.

OK it’s Christmas Eve here in the UK, and wherever you are in the world, from all of us here at EcigClick have a very Merry Christmas!