Ecigclick
Home Latest Vape News and Views We Support the UK Back Vaping Save Lives Campaign – Will You?

The UK Back Vaping Save Lives campaign has been launched to give vapers the chance to fight the World Health Organization’s call for a total global ban on e-cigarettes.

Here at EcigClick we’re joining the fight to stop the ignorant WHO from banning what we – and very many others – believe is a life saving product. 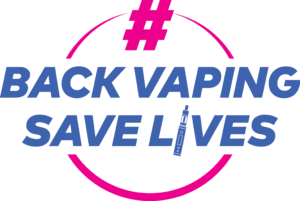 I’ll show how you the UK vaper can get involved a little later.

But first a little bit of background as to why the need for a Back Vaping Save Lives campaign in the first place.

This culminated in the article: UK Vape Ban? Nope Just the WHO Being Reckless and Stupid As Usual…

In a nutshell the WHO is calling for a complete worldwide ban on vaping and at its Convention on Tobacco Control, Conference of the Parties [COP9] to be held in November, has the proposal front and centre on its agenda.

The New Nicotine Alliance chair, Martin Cullip, told me it was no empty threat and urged vapers to come together to fight the vape ban plan.

I covered this in the article: Proposed UK Vaping Ban Is NO Empty Threat Says UK Vape Advocacy Group.

Politicians and advocacy groups were quick to respond and a UK team is being selected to go to COP9 to face down the WHO in its own back yard: UK Vape Ban Fightback Begins – Advocacy Top Team Assemble!.

However, and just like any fight, numbers matter and the Back Vaping Save Lives campaign is the rally cry for the world’s vapers to come together in a show of force.

Remember the old adage, we are many…they are few…

UK Back Vaping Save Lives Campaign

The UK arm of the Back Vaping Save Lives campaign is being led by Mark Oates.

He’s an established and well respected vape advocate and runs both the We Vape advocacy website and the Snus & Nicotine Pouch Users Association.

The #BackVapingSaveLives campaign is calling on the UK Government to literally back vaping and to fight the WHO’s vape ban plan.

Mark lists three key points behind the campaign as:

Government must stand up for vapers at the World Health Organisation’s COP9 to save British lives.

Despite overwhelming evidence vaping is the best way to quit smoking, WHO will call for governments to ban it in November.

They have denied any input from consumers, ignored advice from some of the word’s leading scientists and researchers and are blind to the millions of ex smokers whose lives were saved or extended by switching to e-cigarettes.

Cancer Research UK, the British Medical Association and Public Health England all back vaping as the most effective way to quit tobacco, with PHE stating it was 95 per cent safer than smoking.

Each year more than 50,000 British smokers switch to e-cigarettes.

Therefore, WHO’s unfounded attack on e-cigarettes is threatening the adoption of a tool proven to save lives.

Absolutely and as I always ask, why the hell is the WHO so anti-vaping..?

Answers in the comments below…

Back Vaping Save Lives – Get Involved

The Back Vaping Save Lives campaign isn’t calling on vapers to grab their pitchforks and march on the COP9 – not a bad idea [hush my mouth lol].

Instead it needs you the vaper to sign up in support and fill out a simple form with your personal pro-vaping story. Two postcards will then be sent to the Secretary of State for the Department of Health & Social Care and one to your local MP.

Please include your message about how vaping has helped you, and feel free to include details of how long you were smoking for and how much you used to smoke a day.

That’s all it will take and given there’s 3.7million vapers here in the UK alone, that kind of support for vaping will have a massive impact on the politicians.

Head over to the Back Vaping Save Lives website now and fill out those forms – your voice could stop a global vape ban!

A final rally cry from Mark:

The World Health Organisation has constantly made threats against vaping, which we know to be one of the most successful aids to help people stop smoking.

This is a harm reduction tool and could save literally millions of lives a year – yet WHO has set it in its sights beside tobacco.

It is telling that for the COP9, consumers yet again have been blocked from giving their input. It seems any one who disagrees with WHO isn’t just ignored, but denied a voice in the first place.

The science on vaping is there. Therefore it’s vital the UK government stands up for its pro- science policies at COP9 and stands up to WHO to protect vaping and vapers in the UK and across the world.

This is an opportunity for Britain to be truly global and save the millions of lives that are cut short by smoking each year.

You know what to do and don’t forget to share the hell out of the campaign using the hashtag #BackVapingSaveLives all over social media!