The Armour Squonk Mod By Dovpo

The Dovpo Armour Squonk is a stylish new squonker.

Marketed as “The Last Samurai, the beginning of Nirvana”. Erm ok, something to do with fighting and grunge music then? Shop Now
The design is a joint venture between Dovpo and Bruce (the same collaboration who created the Dovpo Bushido). But I am still none the wiser as to who the mysterious Bruce fella is!

Bruce has thankfully written his name all down the side of the mod so we don’t forget about him! However at first glance it does look like “Bingo” or “Boing”. After a bit of Googlering Bruce is part of “Bruce Pro Innovations” and is a Chinese Vape Reviewer. Anyway that’s going off topic a bit – back to the handsome Armour! The Armour boasts a super quick firing speed of less than 10ms and is powered by dual 18650 batteries – which are sadly not included. This is a mechanical squonker but there are some features to help to keep you safe – but obviously Battery Safety is something all vapers need to be clued up on.

There is no screen on this at all – just some LED’s which will show you the battery capacity remaining by changing colour and will also light up or flash when there are other indications. You actually have a power switch on this too – a toggle – on/off switch! This is a squonking mod so you do get an internal squonk bottle in the kit, but I can’t find the capacity of this anywhere. You can also get the Dovpo Armour RDA in the full kit which is a single coil squonk RDA with a deep juice well. There appear to be 2 colour options – Black and Red or Purple and Black. However I have also seen a Green version which looks gorgeous! The design seems to be aiming for simplicity with toggle switches and simple LED’s. 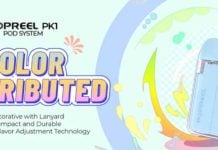