SPD A8 – The New Updated TC Mod From Ehpro

The Ehpro SPD A8 is the follow up to the Ehpro SPD A5, which was the first temperature controlled vape mod from Ehpro, also featuring up to 50w of output power, small form factor and powered by a removable 18650 battery. The Ehpro SPD A8 has been totally redesigned and bears very little resemblance to its predecessor, it now sports a rugged look with juice resistant housing, centrally located 510 connector, an output power upgrade to 80w and a built in 4000 mAh lipo battery recharged via micro USB.

The SPD A8 will be released in conjunction with the Billow V2 Nano, and sold together as part of the Ehpro EKit G3. Lets have a look at what the A8 brings to the table!

As mentioned, the A8 will be available together with the Billow V2 Nano RTA as part of the Ehpro EKit G3, above is what you would expect to find if you purchase the SPD A8 separately. I must mention that my unit was a test sample received for the purposes of review, so the contents may change for the final retail version.

I must say that upon first look I expected the Ehpro SPD A8 to be a pretty weighty unit, it’s pretty big and looks robust and solid on first appearance. However, the unit itself is surprisingly light in the hand, it weighs a lot less than I expected it to!

The finish has a rugged appearance, my review unit was black but it will be available in a range of different colors.

Unfortunately it did feel quite cheap in my hand with very clicky buttons which I felt let down the overall appearance of what I thought was a solid looking mod! The housing itself is designed to be juice resistant which will prevent juice from leaking into the internals and rendering the unit unusable.

An OLED screen is present which is clear and concise, it gives you information on the current battery status, power output, resistance, temperature limit (if in temperature control) and the current mode The menu system took a bit of getting used to at first but the more I used the unit the more I got used to it. It isn’t particularly user friendly at first!

It’s 5 clicks of the power button to turn the unit on, but you have to do this pretty rapidly as those 5 clicks must be completed inside 2 seconds otherwise you have to start again. By default, the device is in temperature control mode when you first turn it on. Pressing power and + or power and – will take you into the menu screen, + will scroll through the different menu options and – will return you to the previous menu. Selecting a menu option is done by pressing the power button on the highlighted option.

There are 6 options present in the menu system and the first is Working Mode Setting (which means you change your setting from Temperature Mode to Power Mode for wattage or Voltage Mode for voltage).

The Ehpro SPD A8 at present only supports Nickel wire for temperature control. The next menu option is Temperature Units Switch which gives you the ability to switch between Celsius and Fahrenheit, next is ‘Hands Mode Setting’ which will switch the screen orientation, after this is ‘Display Mode Setting’ which enables you to turn off the screen to save power, the next setting is ‘TC Power Limit Setting’ which enables you to set a wattage output limit when in temperature control, and finally you have ‘System Software Updating’ which you will need to use when updating the software whilst plugged into a computer via the micro USB cable.

The 510 connector is spring loaded so that you can get a flush fit with your atomizers. There was a ‘caution, hot surface’ warning at either side of the 510 connector, which I didn’t feel was necessary. The unit never seemed to get particularly hot during use even when running it for a period of time at the 80w maximum. The SPD A8 is powered by a built it 4000 mAh lipo battery, which is charged via a micro USB port at the side of the unit. Interestingly, the mod also supports future software updates via the micro USB port, however Ehpro are remaining tight lipped on what they have planned for future upgrades.

Temperature control is easy to set up and start using with the Ehpro SPD A8. The unit is set to temperature control by default out of the box, or if you have changed the setting to power or voltage you just go back into the system and change it back.

You will need an atomizer with a nickel build to take advantage of the temperature control function, as for now the SPD A8 only has support for Nickel builds with a resistance down to 0.1ohm.

You will be prompted as to whether the coil is new or existing, you select either option by pressing + or -. This will take the resistance of the coil and you are then ready to use the temperature control mode on the Ehpro SPD A8!

How Does The Ehpro SPD A8 Perform?

Battery lifespan is superb with the Ehpro SPD A8 thanks to the built in 4000 mah battery, plus charging on the move is quick and easy with the micro USB charger. It has lasted me days in between charges, so it’s an ideal mod for me to take out and about without needing to worry about whether the battery is going to last or not.

It does seem to charge up pretty quickly too, only needing a couple of hours to recharge fully. You can also vape whilst charging as the SPD A8 does support pass-through capability. The 80w maximum output power is excellent and means I can get great performance out of any of my sub ohm mods. 80w is more than enough for most people’s usage! Of course using the device at higher power ranges does drain the battery considerably quickly.

In temperature control mode, I do seem to get a longer battery life than using it in standard power or voltage modes.

Overall, the Ehpro SPD A8 is a superb little performer!

Despite the quite cheap feel of the Ehpro SPD A8, it’s actually a very solidly built little unit, I’ve had no problems with any of the parts and the 510 connector has fitted all atomisers I’ve used with it perfectly. The Billow V2 Nano in particular looks great and the Ehpro EKit G3 containing both of these is going to be a great little buy.

It’s a great little performer, and powerful with 80w of power, the temperature control function works really well and the battery life is great with the built in 4000 mAh battery.

For those looking for a solid little unit with great performance, the Ehpro SPD A8 is ideal. 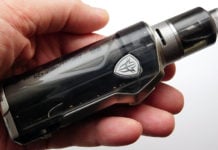