So today I’ve got the little Eleaf iJust Mini kit to review.

If you missed my review of the iCare Flask I mentioned a little about the huge number of starter kits that Eleaf brings on to the market. They’re a long established company, having been set up in Shenzhen in 2011. The iJust series has itself has been around for a while, with the iJust Start and iJust Start (Plus) coming out at the end of 2015. These were an offshoot of the iStick range starting back in 2014.

What Can We Expect From The iJust Mini by Eleaf?

So today I’ll be reviewing the latest addition to this line up, the iJust mini, not to be confused with the Mini iJust that they also released, or the iJust 2 Mini that was it’s follow up!

Yeah, when I said that Eleaf make a lot of products, I wasn’t exaggerating! If you want a giggle, go have a look at the list of manuals on their website. I defy you to find any sense in how they choose to name their things!

Just to further confuse matters there appears to be two versions of the iJust mini. They have the Childproof Version (which is “Completed Childproof” according to their website) and the Basic Version.

Differences seem to be the fill mechanism, the fact that in the basic version you only get the 0.6Ω and you have to choose between the 2ml straight glass or 3ml bubble glass.

I have the Childproof version, so let’s see what that is all about!

The product in this review was sent over free of charge for the purposes of review. This in no way alters my review, and I will report back honestly with what I find. So let’s start off at the top and work our way down!

The drip tip is a black plastic vase shaped tip, comfortable but nothing terribly fancy, although it’s nice to see it’s double o-ringed. I did find the tolerances a little loose here, so if I pulled it out my pocket for with the drip tip, it would often come away in my hands. Happily it is a standard 510, so you can easily swap it out for your favourite drip tip.

Next up we have the top cap with its child proof fill mechanism. Got to hand it to Eleaf, you’re not going to accidentally have it open in your pocket and flood your trousers with juice! However in terms of feeling, it’s not the nicest mechanism, because it doesn’t lift straight up and has a bit of side-to-side play, you often feel it grinding slightly as it rubs against the top of the mechanism.

The fill port itself is covered by a silicon self sealing gasket. As normal with these, I turned it upside down with a full tank of e-liquid and nothing leaked out.

So just push the tip of your bottle through, to fill it up. It will come preinstalled with the 1.2Ω coil.

This is possibly all a bit of over engineering for a relatively cheap tank, as you make something more complicated the quality tends to drop down (if you’re hitting the same price point).

I would much rather see a simple tank that’s well made, than really clever tank that dips on the quality.

The glass is either a straight glass out the box. Or you have the option of the bubble glass in the packaging. I actually really like the bubble glass. It reminds me a little of a flying saucer or a fish bowl that’s been squashed.

Next up you’ll see a stainless steel ring (we’ll come back to that in a moment), and below that your AFC ring.

The AFC is a cyclops style with either a choice of one wide open hole that matches up with the cutout in the ring, or 5 equally sized small holes that you can close off one by one to really fine tune your vape.

Changing your coil is a joy on this tank… and it’s very rare that I would say that!

To change your coil: What’s especially clever is as you unscrew the base, the coil retracts out the tank a little and the e juice ports close off.

This then reverses when you screw the base back on, pushing the coil in and opening up the ports.

You can legitimately take your coil out, and put the tank upright, and no e-liquid will escape!

Very clever system which I’d heard about before, but this is the first time I’ve had the opportunity to try it out. I’m not sure exactly how necessary this is, especially with a maximum 3ml capacity, but I do like how it works.

Now remember that silver colour ring I spoke about earlier?

This flat washer is the piece you need to remove if you want to change your glass, which is held in place by two o-rings.

There are two little holes in the threaded washer, and the tool that comes in the box is sized so that you can pop them in and unscrew it. If you loose the tool though it might be a bit more challenging!

Based on the manual, it looks like this may only be included with the Childproof version, it doesn’t look like you can change the glass on the Standard, but I don’t have that version to confirm.

Not much to say about the battery, it’s a stumpy little tube with a micro USB charge port on one side and the single shield shaped button on the other, surrounded by an LED ring.

Branding is minimal with iJust mini printed at the base below the USB port and Eleaf on the other side.

The LED’s flash different colours when you change the output:

Also when you’re vaping it will light up to tell you what it’s battery life is:

How does the Eleaf iJust Mini perform?

I started off with the coil that was preinstalled, and I got a nicely satisfying mouth to lung (MTL) vape out of it.

Flavour was pretty good, but it did seem to struggle a little with some of the really cold menthol/fruits that I enjoy.

Vaping on 50/50 Berry Ice by Vape Simple, I got a good taste of the berries, but not quite the cooling kick that I normally get from this e-liquid.

Vapour production was decent for such a dinky little device, although oddly when I changed the output, it didn’t seem to make much difference to either flavour or cloud production.

I even did some blind tests where I deliberately didn’t look at the colour (I got a friend to change it to a random output of the three), and I honestly couldn’t tell you which power setting it was at.

This is a bit of a disappointment, as I figure that if you’re going to go to the effort of putting in a variable output, then you should really be able to tell the difference easily!

Changing the airflow had a much bigger impact, and you can tighten this up for a REALLY restrictive MTL if you want. I found that about 3 of the little holes open gave me the best flavour.

Moving over to the 0.6Ω coil (that I was able to do so with liquid still in the tank!) I definitely noticed a little bit more vapour production.

Unfortunately the flavour fell off a bit here as well. It’s certainly not a bad vape, and I’d be quite ok vaping this all day if it was the only thing I had on me.

It just wasn’t special in any way, and I have definitely had better vapes. I wonder if the battery just isn’t quite capable of putting out enough power to make this coil perform.

Towards the end of my testing I was thinking I might put the tank on another mod, and see whether I could get the flavour to improve by playing around with something that gives me a little more control over the wattage.

However that wasn’t to be, see my addendum to find out why!

For such a small device, it’s impressive that they’ve managed to fit an 1100mAh battery in here. Using it as my main kit, I was able to get a couple of days out of it on the 1.2Ω coil.

With the 0.6Ω, using it as a backup device this time, the battery life is surprisingly similar.

I’m deliberately not going to knock any points off for this, because there’s the possibility it was something that I did (although what, I have no idea) or I may just have been unlucky with the coil.

However, after only 3 or 4 days using the 0.6Ω coil I got the 5 flashes that means that the battery was detecting a short circuit and it wouldn’t fire.

“That’s weird” I thought. So I stripped the tank as much as you can, which isn’t much due to the top cap/coil change mechanisms. Cleaned and washed everything, left it to dry, and put it back together.

I genuinely don’t know what happened here, but the other coil still fires absolutely fine.

I’m going to write it off as me being unlucky, but I wouldn’t be doing my job as a reviewer if I didn’t mention it. So make of that what you will.

So, the Eleaf iJust Mini is not the most interesting of kits. But it’s fairly competent at what it does.

I do enjoy the ease of coil changing, but I can’t escape the thought that for a device built to this price point, they’ve tried to over complicate things.

The lift and slide top cap just doesn’t feel nice, it grinds. It’s not a satisfying mechanical snap open/closed. Similarly there’s no way to strip the tank down for easy cleaning due to the mechanisms that manage the coil changing and lift and push top cap.

I would have preferred they kept things a little more simple with a higher quality finish. Especially for a small relatively cheap little device, I just feel like there are too many points of possible failure.

I’d hate to be out and about, only for one of the many moving parts in this tank, to go wrong. And again, if something does break, it’s not something you can take to pieces and fix. Eleaf iStick Power 2 & 2C Preview – I Have The Powerrrrrr!! 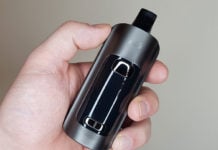