The Frukt Cyder e liquid range comes to us from UK based Juice Locker who are after the cider drinker in you.

These E-liquid flavours have been specifically hand crafted by master mixologists (I hate that phrase!) in partnership with craft bakers to produce an incredibly authentic and tasty vaping experience.

All of the vape, none of the hangover. Makes sense. The Frukt Cyder range is available in 60ml or 120ml “Shake and vape” bottles allowing adequate space to apply nic shots to the level of 3mg (which I’ve used for the review).

On the subject of adding nicotine, please do remember to shake those bottles vigorously and preferably leave them a few days before vaping. It’s something I do and just allows everything to settle and bond together.

Juice Locker have mixed Frukt Cyder to a 70vg/30pg ratio.

What can we expect from the Frukt Cyder E-Juice Range?

Described as fresh, sweet and sparkling there’s certainly an array of fruity flavours on offer here working in tandem with that traditional summer beverage we all know and love. Cider.

I will be looking to see if the fruits bounce off the drinks profile in that sweet, sparkling manner described by the manufacturers themselves. Cloud production should be satisfying and throat hit kept to the bare minimum.

But as the Rolling Stones once wrote, you can’t always get what you want.. Is it too late for Mick Jagger to start vaping?

Let’s see what’s on the other cider the page!

I love the labeling! Set against a cream backdrop it’s clear and precise and carries a welcome touch of maturity to the artistic images depicting the fruits included in the E-liquid bottles.

I’m going to be testing all four profiles on the Geekvape Aegis Legend with the Squid Industries Peacemaker XL dual coil RTA, using Wotofo ni80 fused Clapton coils ohm’ing in at 0.24 and running at 50w.

Before we get to the fruit and juice of this review I would just like to thank Premier Vaping for providing the range free of charge. As always my views are my own and due to the subjective nature of e-liquid reviews, what may be good for me may not be for you and vice versa. Ripe mango and wild raspberries combine to create the ultimate summer vibe! A truly delicious vape with both fruits clearly identifiable on both the inhale and exhale, this fruit cider inspired flavour is unlike anything you have tried before!

Without doubt I’m able to pick up the smell of a fresh, ripe mango from the bottle and the taste test indicates something more than just this single Summer fruit.

Juice Locker mention the inhale, something that has never worked for me if I’m totally honest but on the exhale the mango is very, very good!

It’s done in a way to linger for much longer on the taste buds being sweet yet subtle in flavour. Frukt Cyder have opted for a very realistic, authentic approach to the fruit content and there are fleeting glimpses of raspberry as opposed to a fusion of both fruits but therein lies the last-ability factor.

A very consistent and tasty one and certainly an all day vape for me. The fragrance of ripe passion fruit is instantly recognisable in this crisp all day vape. A sweet, tropical infused flavour with a unique cider twist is perfect in all weathers!

There’s no cider twist in this. It’s all about the tropical theme and is distinctly sweet on the taste buds.

Plenty of depth and the cloud production is as thick and fruity as the profile itself while I pick up a slight tarty edge rounding off the vape.

The flavour is not overpowering yet cleverly lingers after the final exhale. At times the experience is somewhat perfume but generally speaking the e-liquid is pineapple and mango dominant, a key influence.

I get plenty of ripe, refreshing fruit with Passionfruit but the cider theme is severely lacking which is a disappointment. This is maybe just as well because the taste test very much indicates a highly synthetic apple content that, thankfully, doesn’t translate to the final vape.

Frukt have missed a trick here by assuming the word “twist” in the juice profile description.

More a case of bust than twist here I’m afraid. One of the greatest all time fruit cider flavours, strawberry and lime is sweet, refreshing vape bursting with flavour which will instantly have you longing for those Summer days in the beer garden.

I couldn’t help but notice the aroma coming out of this bottle while I was adding nic shots.

Something of an artificial smell of strawberry mixed with a whiff of green apple. Just as well I’m not trying to snort the bottle then, eh? lol

During the vape nothing of the artificial nature of this profile has improved unfortunately and I’ve been here enough times in the past to know how much of a let down that is.

Very often as in this case leaving an unpleasant scratchiness in the throat.

However, this is quite a complex blend and Frukt Cyder have almost pulled it off by mixing the dominant strawberry with a somewhat lack lustre lime and, unlike with Passionfruit, the seasonal beverage content is allowed to shine to better effect. In fact the apple cider content is quite good. On the final exhale it wins hands down. This classic cider flavour has been expertly recreated in vape form. A combination of wild berries including blueberries and raspberries will leave you refreshed and craving more of this fresh and juicy beer garden favourite.

There they go again! Talking about beer gardens. It’s making me more thirsty than wanting to actually have a vape. Lol.

An incredibly sweet and tarty smell wafts from the open bottle leaving little doubt that the final vaping experience must be one of concentrated, fruity flavour. Right?

Cloud production is smooth and dense with no scratching of the throat which is very pleasing but the vape itself is something else all together.

An undesirable chemical aroma comes into effect very early on and the flavour notes are confusing during exhale.

There is definitely a fusion of wild berries underneath this vape, strawberry being the most pronounced but not one fruit seems to be bouncing off the other and I struggle to find either blueberry or raspberry in what is a highly floral arrangement.

Best described as an orally confusing orchestration of summer fruits, it’s difficult to find much enjoyment with Mixed berries.

With Frukt Cyder, Juice Locker have tried to put a spin on standard fruit vapes with the inclusion of a traditional Summer beverage, therefore no doubt attempting to appeal to all fruity lovers out there.

We are dealing with basic fruit profiles that should be clearly defined and instantly recognisable on the exhale.

It’s a natural thing to draw comparisons, especially when dealing with well known fruits simply because there are so, so many out there and unfortunately the Juice Locker recreations fall short of the mark in my opinion.

Cloud production across all four was very pleasing and overall contributed to a smooth and satisfying vape but I’m not alone in writing that flavour must comes first.

Have you tried any of the Frukt Cyder vape juice flavours? Let us know your thoughts in the comments below! 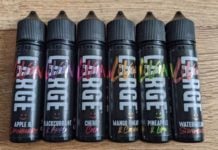