Geekvape are a company that have only been around since 2015 but they’ve already gained quite a reputation for producing some interesting and high-performing equipment.

When I heard that the Eagle was on its way I was quite interested to see how this would fare given the popularity of the Griffin and Griffin 25 RTA.

The Eagle is an almost departure (more on that later) from the RDTA/RTA devices thus far, using what Griffin call HBC or Hand Built coils. I received the retail boxed Eagle and five tubes containing different HBC heads. The packaging is clear, easy to open and has the usual authenticity scratch panel on the rear.

Opening the box, we find the following;

In the HBC tubes we have

The tank is constructed from 316L stainless steel and pyrex like glass. The tank is 25mm in diameter so those with slimmer/smaller mods will get some overhang. All the threads are smooth, no sticking or grind and the seals fit well even on the removable juice fill top cap which has a wider bore Delrin 10mm drip tip and comes with an adaptor to fit a standard 510 tip. Down below we have a laser etched base with a standard 510. The centre pin is gold plated and non-adjustable, sits reasonably proud of the rest of the connector. The Airflow control ring (AFC) is smooth moving with subtle yet effective click points. The air flow slots on either side are generously sized. Twisting the glass body of the tank alters the juice flow control, essential for top filling. The movement is smooth but not too loose.

The tank is also available in black, as well as a taller top airflow version which gains 5.9mm in height but the capacity drops to 6ml.

Coils. A blessing and a curse, personally I quite like building coils but I know there are many that don’t like or just can’t build coils for many different reasons.

And up until now, with a few exceptions this has pushed the “non-coilers” firmly in the direction of disposable atomiser heads.

This is where the Geekvape Eagle makes quite a distinctive departure.

You’ll have noticed the tank doesn’t come with or mention an RBA deck, and with good reason.

Geekvape have produced a range of TWENTY different HBC heads, all of which are intended to be re-wickable and cleanable! 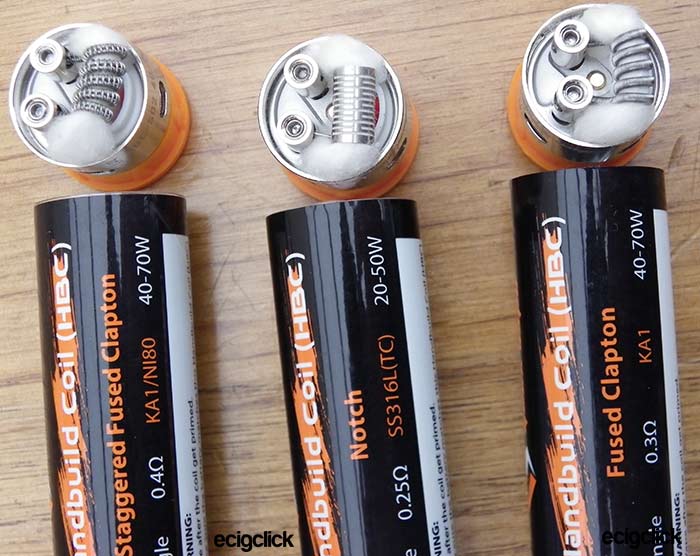 This allows those vapers who have never built, won’t or can’t build to experiment with different ramp times, materials and constructions simply (if at a slight cost) by changing the coil head. Each coil type is marked with a power band in Watts both on the pack and the head itself. Changing the coils is a simple matter of removing the bottom of the tank and unscrewing then re-fitting a new head.

The construction of the coils and heads are good, SS316L bodied with either single or dual airflow paths constructed from silicone (at the base) and PEEK insulator/airpath beneath the coil. 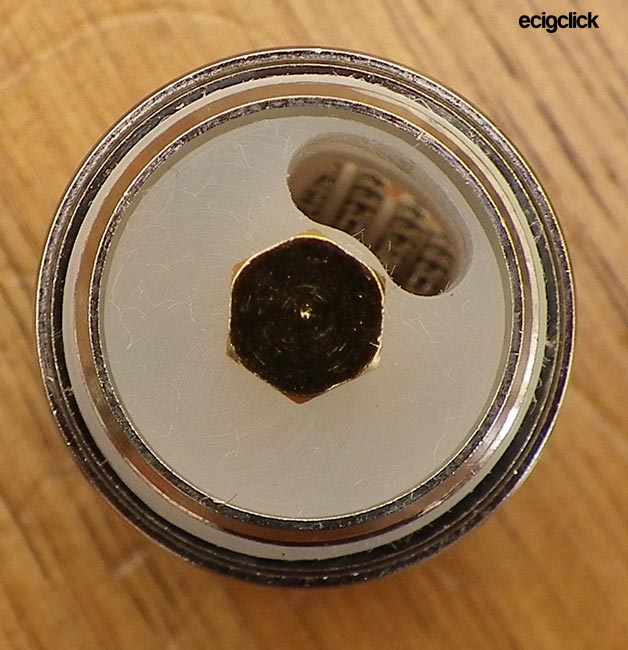 The bottom contact pin is gold plated. Wicking is organic cotton and doesn’t require the cotton to be fed through any holes, it simply sits on top of the juice flow holes.

How Does The Geekvape Eagle Perform?

All the coils performed well, especially after being cleaned and re-wicked. Each had a distinctive style due to different ramp times, heat transfer rates and surface areas, providing a different experience across juice types. 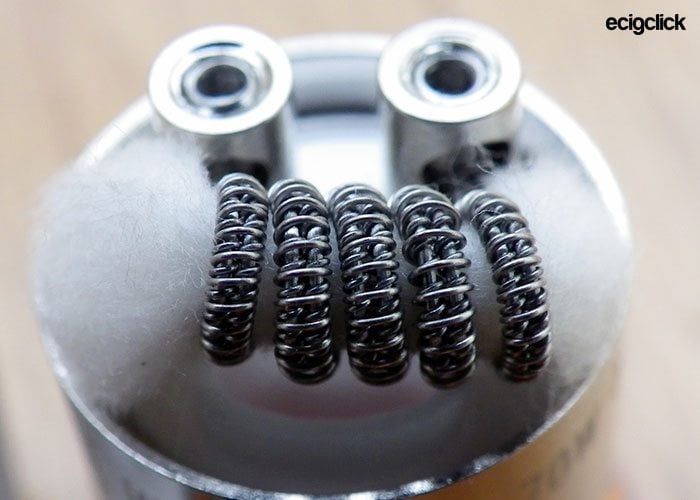 Re-wicking the coils was simple and doesn’t take a lot of cotton. I did find that the juice flow was better with my own wicking material (Cotton Bacon V2) than the cotton pre-fitted.

The coils themselves burned clean easily.

The notch coil, as expected, has a very low ramp time. The wattage bands are pretty accurate, although the Claptons were, with better wicking and the right juice, capable of a lot more than the stated 70W. I don’t think there would be much mileage in going beyond this which is just as well as my mod insisted on topping out at 113W.

Of interest to the more coil friendly amongst us will be the use by GeekVape of standard hex head screws to secure the coils.

Although the posts are not as sturdy as on most RBA/RDA decks it should be possible if careful not to over tighten to replace the coils themselves a few times.

Airflow was good but not “wide open” and produced both good amounts of flavour and vapour although this is not a flat out cloud chasing tank. Interestingly there was not a massive difference in airflow between the single and dual coil heads as, despite there being two airflow paths with the dual coils they are much narrower than the single airflow.

Had this been different we would possibly have seen a bigger difference in vapour production and top end temperature.

It would be interesting to see what the top airflow version does to this.

The tank doesn’t exhibit a massive heat soak so doesn’t have a huge ramp time unlike some of the more interesting tanks around at the moment.

I have to say that Geekvape have pulled off a coup here. They’ve brought something to the table with the HBC heads which is a genuinely unique feature and has been very well engineered.

They’ve paid attention to detail and given the replaceable coil customer a really useful and fun alternative.

The only minor changes I would make would be the airflow on the dual coil heads and the lack of the adjustable 510 centre pin.

Would I buy the Geekvape Eagle sub ohm tank? Yes, and I’d probably get a Black top airflow model as well. Would I replace it if it was lost or broken?

GeekVape+++ on this one.