Today I’m going to be taking a detailed look at the new Geekvape P Tank an interesting if somewhat an unusual looking 5ml sub ohm tank.

Geekvape was founded in 2015, and have a great name for innovation; they are based in the Shenzhen district of Guangdong China. 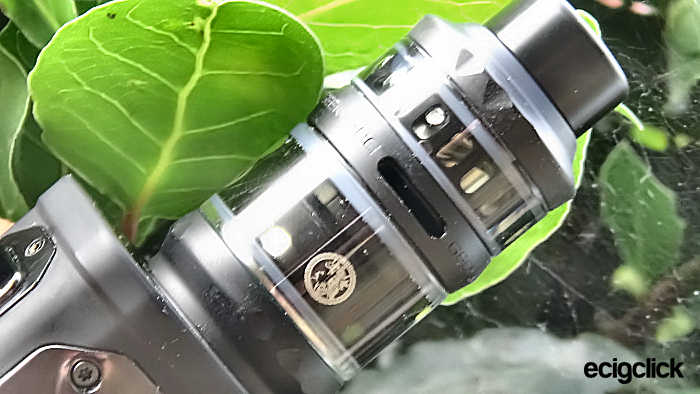 We all know that just lately Geekvape has been refreshing some of its more established kits most notably the Aegis range.

I guess they wanted to add shockproof tank with a larger capacity to the mix, Geekvape has other Sub Ohm tanks available, such as the Obelisk C Tank, the Zeus sub ohm tank and the Z Max Tank.

What Can We Expect From the Geekvape P Tank?

Well to start with the tank has a whopping 5ml capacity, the coils won’t come as a shock as they are the excellent Z series of coils, made for great flavour and excellent vapour production!

What makes this tank unique is it has double liquid chambers and a middle airflow system. Geekvape say this tank is shockproof, that is not to say that the glass is unbreakable, it is trust me if the tank falls at the wrong angle!

Geekvape has released the P Sub Ohm tank in 6 colours. The Geekvape P tank was sent to me direct from the company for the purpose of review. The Geekvape P Tank is presented in a cardboard box with a paper over sleeve.

I was sent the Black version of the Geekvape P Sub Ohm Tank.

It measures in at 59.9mm tall, and with a diameter of 24.5mm ballooning out to around 26mm, and is made of Stainless Steel, Pyrex with an 810 Delrin mouthpiece. The P Tank dismantles into 8 parts, if you take into account the removable airflow ring, mouth piece and coil. Starting with the top cap it’s made of stainless steel, and is beveled to a flat surface for the mouthpiece, it has an embedded O-ring for a tight seal.

BTW both included 810 delrin drip tips are fairly chunky, the cap is a ¼ turn on and off. The underside of the cap also has an embedded O-ring to eliminate leaks. The main body section is all one piece and made of Stainless Steel. It has a patterned viewing window that seats under the 2ml Pyrex glass. Looking into the juice well – you will see 3 intake slots these are quite deep inside the tank.

You’ll also see the top part of the long chimney that seats the cap, which extends through the tank to the coil.

Under this is the middle airflow system ring, which has 3 wide slots, the airflow ring itself is removable and has very light engraving around it, which says “GEEKVAPE”.

The bottom part of the main body has 2 O-rings to hold the larger glass in position.

Looking under the top part of the coil cover you will see the other end of the 3 liquid fill slots. On the outside of the coil cover is printed 3 depictions of Poseidon the Greek God of the Sea of whom this tank takes its name, between 3 liquid intake wick slots for the coil. At the bottom of the coil cover is well turned threading for the base and inside the coil cover you will see 3 internal airflow ports, these stretch up into the tank to be controlled by the airflow ring. Lastly the base, on the bottom is printed with all the usual information.

The 510 connection threading has been turned well, the gold plated connection pin is none adjustable.

Inside of the base is another embedded O ring and the coil connection posts which are gold plated, as well as 3 Stainless Steel posts to hold the coil in position.

These are very good coils, I use them in several tanks that take the Geekvape Z coils.

The quality and manufacture of the Geekvape P Tank is not in question, however I do have to question the look of the tank it seems a little weird to me!

How Does the Geekvape P Tank Perform?

For e-Liquid I will be using is Mule Fuel – Django Mango. Choose which of the included coils you wish to use.

Leave the tank standing for 2 or 3 minutes so the coil can soak up more liquid. Screw the tank in place on your chosen mod and enjoy.

My OCD goes completely bonkers when I looked at this tank, it’s got to be the oddest looking tank design I’ve ever seen.

To me it looks like the designers had a few too many sherbets one weekend and decided to pop on another tank section to increase the fill capacity of the atomiser lol. Seriously I hate to say the tank is butt ugly, but I can’t find a more polite way of putting it lol.

Starting out with a conservative 45w direct to lung vape with the airflow restricted to the half point!

I received a smooth cloudy vape with plenty of flavour!

The middle airflow is fairly noisy albeit not a gurgling harsh way, more of a whooshing airy sound.

I upped the wattage to 55w then on to 80w with the airflow wide open, the airflow was quite good fully open with excellent vapour production. I was able to push the wattage with this coil up to 90W before the heat became too much for my micro lungs, talk about mega vapour it was amazing.

One would think that having a long chimney would result in poor flavour, this is not the case with the Geekvape P Tank, the flavour was clean and tasty.

Chain vaping this tank at 55w produces a shed load of vapour, within a few minutes my office was so full I had to fully open the window fully so I could see lol.

While we are talking of chain vaping, the tank becomes warm but not overly so! For my daily vape I like a more restricted DTL draw, I vape this tank at 55w with the airflow set to half.

The Geekvape P Tank is definitely a Sub Ohm tank – I did try vaping it around 30w with the airflow cut right down to almost nothing.

Honestly with other tanks I can get away with this, but because the P Tank has such a long chimney it expects power and airflow, or the flavour gets lost somewhat in translation.

Geekvape is marketing the P Sub Ohm Tank as a 5ml tank.

I have not heard if they will be bringing out a TPD version somehow I doubt it!

My thoughts on the P Tank design

I believe Geekvape has missed an opportunity here with this tank.

If it had been me that had designed this tank, I most definitely would have considered making the top tank section removable, thereby making the tank around 3ml with the option to add the top tank as an extender, making this tank again 5ml. Now for the main part I’m quite impressed by the Geekvape P Tank, it’s a very usable tank with good flavour and excellent vapour production, the airflow while slightly noisy is smooth.

However I can’t get over the looks of the tank, for me personally it makes me shudder every time I look at it, like there’s something wrong and you can’t really put your finger on it!

Would I recommend the Geekvape P Sub Ohm Tank?

Talking purely as a vaper with many years under my belt the Geekvape P Tank is good for clouds and flavour and liquid capacity so on that score “Yes” I would.

It’s a personal thing but if you’re looking for a good looking tank then I’d have to say “No”!

Would I buy the Geekvape P Sub Ohm Tank again due loss or damage?

Not on a bet lol, however Mrs J likes it so I’ll just give this one it to her!

What do you make of the design?

Are you using the GeekVape P sub ohm tank or thinking of buying it?