Cute Design – Simple To Use Pod Mod But How Does it Vape?

The cute little GQ Blue Beast Kit hails from China and is yet another closed pod mod that makes vaping as simple as it gets.

And yeah it does look remarkably similar to another device – the Atopack Penguin – which I reviewed here. This kit features an impressive 2000mAH battery and incredibly a 10ml e-liquid capacity which is of course refillable.

So is this indeed a beast – or has it given me the vaping blues?

Quite a nice presentation with a sleeve revealing a solid box with everything packed away neatly: Mine arrived well charged but I advise charging it as soon as you get it – unfortunately there’s no pass-through so you can’t use it whilst it charges – on mine anyway! There’s no screen but whilst charging the device will change LED colours: Simplicity is key here – this is so simple to use even I managed to get it vaping first go and without looking at the instruction manual!

There’s no buttons to press or settings to worry about all that is taken care of – you simply fill and vape. It’s powered by an internal 2000mAH battery which takes around 3.5 hours to charge – I put that to the test and found it a little shorter.

I’ve had this close to a fortnight and I’m finding I get a solid seven hours of use before I notice the flavour dimming which is a tell-tale sign the battery is on the wane.

And this is indeed a beast holding a whopping 10mls of e-Juice!

It’s not a drinker either – I found almost 3 days on a full tank using this most afternoons and evenings.

It’s actually put together very well indeed and feels solid and chunky in the hand.

There’s no magnets holding it all together and everything slots into place snugly with no annoying rattle. Design wise it is strikingly similar to the Atopack Penguin and does indeed dare I say look ‘cute’.

Despite being called the GQ Blue Beast – it doesn’t come in blue but you can choose from silver – black – white – gold and a quite dazzling rainbow.

How Does the GQ Blue Beast Perform?

It’s described as a starter kit – however once again I have to beg to differ.

This is NOT a mouth to lung kit – so if you’re coming straight off the ciggies this may not be for you. The amount of draw required means this is a sub ohm, direct to lung kit – suitable for newcomers to DTL and experienced vapers looking for a handy easy to use device – perfect for the car for instance.

OK, as a sub ohm closed pod kit it works quite well – however ‘work’ is the word as it takes some effort to get a decent vape.

The first couple of draws are a little weak for flavour and vapour but by about the third pull the little bird wakes up and whilst not becoming an angry bird it certainly ups its game.

Cloud production is OK and flavour whilst dimmed isn’t too bad at all.

I’ve reviewed quite a few closed pod mod systems and this is by far the best one I’ve tried – however that’s not to say I love it.

It is what it is – simple to use – from filling to vaping and it is built quite well and it has to be said looks good too.

The flavour from the cartridge isn’t too bad and you do [eventually] get decent clouds.

I’ve had no leaking whatsoever which is a good thing as the huge 10ml capacity would make a right mess!

So yeah I love the fact this is 10mls!

The amount of effort required to get a decent hit is key here.

I’m not being lazy but it takes two or even three deep – and I mean deep – draws to get a decent vape and after a while that can leave your head spinning.

I’ve used this for a fortnight and the coil and cartridge still seem OK however as there’s no way to swap out the coil, an extra cartridge in the kit might have been nice [they can be bought separately].

The lack of pass-through is a shame too – though I’m guessing that has something to do with it being operated by draw rather than button.

There’s no doubt the GQ Blue Beast is a smart looking piece of vape kit that feels good in the hand and is well put together.

It’s so simple to use even I managed to remain cock-up free whilst using it.

The fact it has a decent battery life and can hold 10mls of e-liquid means this is ideal for work – leaving in the car – office or taking out for the day.

However it might be my lungs but you do have to work hard to get a decent vape on it and whilst the clouds are good the flavour is slightly low key.

So would I recommend it?

I would for use as a spare or to leave where I’ve mentioned above – but I wouldn’t recommend this as your ‘go to’ daily direct to lung device. 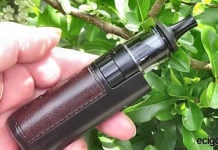