Recently launched and available to buy online in the UK and Europe (details below), their first contender to the electronic cigarette arena in the form of their ‘Heat Not Burn’ vaping device. They have also recently launched the IQOS mesh vape device.

Hailed as a smokeless “smoking” device, the IQOS uses tobacco filled cartridges, these look incredible like stumpy cigarettes, which are heated and not burnt like traditional cigarettes, to provide a smokeless (almost) experience.

Keep in mind these still contain tobacco and while we await research into ‘heat not burn’ to see what, if any, nasties are carried when not burnt in the traditional manner.

If you would rather get away from tobacco altogether then we would recommend going down the ecig + e-liquid route.


UK/Europe – Save 5% With Code ECIGCLICK Off the bat, the design and the materials used in the manufacture of the IQOS system are of a high-quality.

This is no surprise considering PMI’s extensive research and development into the ‘Heat Not Burn’ technology and the IQOS system for a period over some ten years before manufacturing and releasing the product. The ‘Holder’ or IQOS devices, looks very similar in appearance to a traditional pen-style e-cigarette.

However, unlike other e-cigarettes, the IQOS uses actual tobacco, in stick form, instead of nicotine based e-liquid.

Unlike traditional cigarettes which burn at around 600°C, the IQOS heats the tobacco to about 350°C, so it doesn’t produce smoke, ash or combustion. The heat is produced by a small element or blade located in the top of the device.

This is where the tobacco sticks (Heets) are inserted prior to activating the device. Once a Heet is inserted, the IQOS can be activated by pressing and holding down the button on the device for approximately 5 seconds, at which time the GREEN LED will begin to blink.

Heating up of the element takes approximately 20 seconds for the device to reach optimum temperature.

The heating blade will remain active for approximately 6 minutes, which is roughly the same length of time it would take to smoke a traditional cigarette.

At about the 5 minute mark, the LED will change to Amber indicating that the device will be switching off shortly and that the Heet is almost finished.

A good little feature that mimics the longevity of a traditional cigarette very nicely.

One thing to note is that once the device is activated you can turn it off at any point you like but the Heet will need to be replaced and the device will require returning to the pocket charger for a recharge before it can be used again.

As its name suggests, the ‘Pocket Charger’ is very pocket-friendly indeed and is primarily used for carrying, charging and cleaning the IQOS device.

The unit is relatively simplistic, comprising of an enclosed battery and a docking station to house the IQOS device. Down the side of the charger there are a number of buttons and LED indicators, let’s have a look at these individually.

Starting at the top

There is a small square button which appears to be stainless steel in construction, this is used to open the flip top section of the charger to gain access to the docking port for the IQOS device.

Below this there is the first of the LED’s indicators, this one highlights the status of the IQOD device while in the pocket charger.

Below this we have four small individual LED’s which indicated the charge status of the Pocket Charger.

Next is the Heater Cleaning status LED. The heater in this case is the small blade type element inside the IQOS Device which requires periodic cleaning to remove any residue tobacco left behind from the HEETS.

The status of the LED is as follows:-

You can of course override this by pressing and hold down the button for approximately 3 seconds to manually activate the cleaning cycle indicated by the blinking green LED.

Once the cleaning cycle is complete the charger will automatically recharge the IQOS device so you’re ready go again.

The last button on the Pocket Charger is the main Power Button to activate or turn the charger off.

Finally, at the base of the Charger we have our standard micro USB port for recharging the charger itself. The heated tobacco HEETS are made by blending tobaccos from several types and origins.

The tobaccos are ground into a mixture and then reconstituted back into a tobacco sheet to manufacture the HEETS.

There are a number of additional elements added to the tobacco during the process which you can study in more detail on the Philip Morris website. 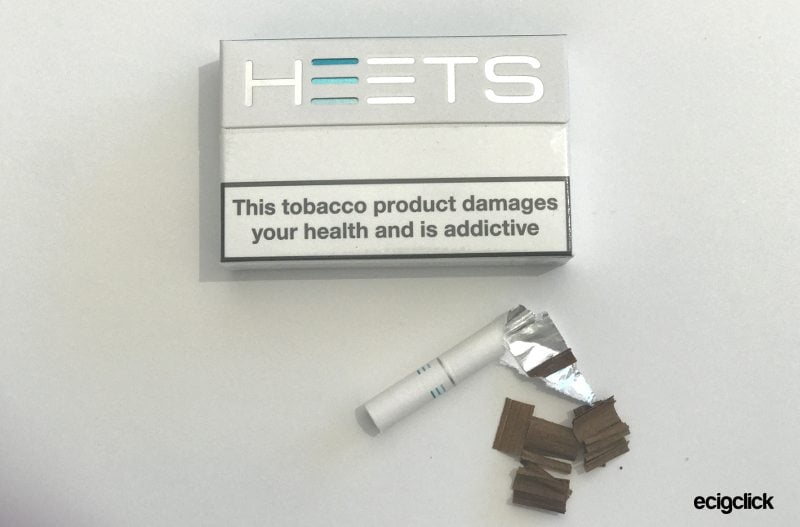 To use the HEETS, you simply take one from your preferred blend and push it down, tobacco end first, into the top opening of the IQOS Holder.

There is a little bit of resistance here as the heating element/blade cuts into the tobacco but gently continue to push down until the end of the HEET touches the base of the element housing.

And now you’re ready to rock & roll on your IQOS.

How Does The IQOS Perform?

I spent a considerable length of time using the IQOS as it’s something that I personally have never come across before, it’s completely different to my preference in an alternative to traditional cigarettes.

The kit as a whole was very simple & easy to set up and use!

There’s no airflow or wattage to adjust, in fact the only changeable item on the kit is the HEETS.

If your looking to blow clouds with this device you’re going to be disappointed, as there is virtually no smoke given off by the HEETS. So cloud comps are out 🙂

The bottom line, I was suitably impressed with the IQOS kit as an alternative to traditional cigarettes.

As a ‘Complete Package’ I have to say that I was very impressed with the IQOS system. It was incredibly simple and intuitive to setup and use.

It’s the closest thing I have found to the experience of actually smoking a cigarette.

I can definitely see that the IQOS system has a place in the smoking cessation market-place but this, I feel, will be mainly with those looking to give up smoking traditional cigarettes and move to something that *could be* ‘Healthier’ and possibly less in terms of cost.

I doubt very much that this will appeal to established Vapers as it’s too much like going back to the old analogues which they fought so hard to kick into touch.

I only have one issue with the IQOS system, and it’s subjective based purely on my own personal tastes!

At present (in the UK) the HEETS are only available in three different blends, Rich, Smooth or Menthol.

While I admit I did enjoy the Menthol blend I did find the other two a little bit too strong for my delicate taste buds!

So I feel that the current range of HEETS are a little bit limiting. Hopefully PMI have other blends in the pipeline.

Where is the IQOS and Heets Available

As an alternative to cigarettes this ‘Heat Not Burn’ device is worth adding to a ‘maybe’ product list. If you have struggled with e cigarettes and e-liquid then it may be worth checking out.

Will I personally be ditching my e cig and e-juice for the IQOS? Not a chance!

Where Can You Buy IQOS?

The Iqos is currently available in the IQOS store in London and other major cities around the world. You can also buy IQOS online in the UK and Europe through the link below


UK/Europe – Save 5% With Code ECIGCLICK