The CUPTI is the Perfect All In One Vaping Mod

Cue the joke – “is the CUPTI my cup of tea?” – and in answer the Kangertech CUPTI is most definitely a cup of hand-blended Darjeeling rather than a cheap packet of Tesco own brand teabags. In other words, this is a superb 75watt Temp Control ‘all in one’ vaping device that newbies and experienced vapers will enjoy immensely. 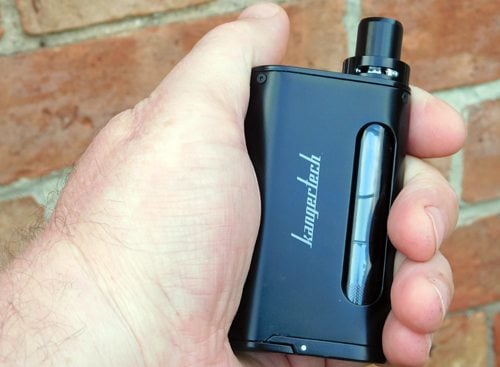 It’s known as an ‘all in one’ (AIO) as the 5ml tank is sealed into the mod and given I had wrinkled my nose up at similar mods I have to say I’m pleasantly surprised – it sure makes everything seem so much simpler – just fill and vape!

I have never vaped on Kangertech device but I am aware the CUPTI’s predecessor – the Nebox – had awful leaking issues.

I can tell you the CUPTI hasn’t leaked once in the week I’ve used it and has been an absolute solid performer.

Enough of my ramblings let’s dig a little deeper into the CUPTI.

The Kanger Cupti was sent for the purposes of review by Cacuq. As always, our views are our own. Given the only battery venting is the cutout Kanger logo on the side of the mod a set of black battery stickers is a nice touch – white if you have the white model – meaning you don’t see the colour of your battery peeking through.

Despite being a bit OCD about that sort of thing I didn’t bother as I thought the lurid green battery I’m using made the logo stand out a bit. The addition of the 1.5 ohm NiCr coil plus a cig sized MTL (mouth to lung) drip-tip means you can vape on the CUPTI as you would a normal cigarette making it definitely a mod for all vaping tastes and styles. As already mentioned the CUPTI starter kit includes x2 coils – 0.5ohm and 1.5ohm to start you off and you can of course buy replacements including the Ni200 – 0.15 ohm. Should you be unlucky enough to break the Pyrex tank there’s replacements for that too.

The design is first rate and the CUPTI is a lovely compact mod to look at sitting beautifully in the hand.

I was a little dubious of an AIO – but Kangertech has certainly sold me on this one – I love it.

Filling this little guy is an absolute doddle.

It’s a simple matter of unscrewing the top removing the large central chimney and pouring in your juice.

Keep an eye on your filling levels using the hard to miss MAX fill line – over that may result in flooding.

Swapping out your coil is a pleasing hassle free system too.

The coil simply screws on the end of your chimney meaning you don’t have to wait for the tank to drain – I like that!

One little criticism on this design aspect is the join between your coil and chimney does give you the impression – in the black CUPTI anyway – that you have juice in your tank.

I found to my cost this wasn’t the case and got an awful dry hit – yuk!

However, the huge chimney design and the airflow holes on top mean the vapour production is impressive.

I do like a loose draw when vaping and felt even with the airflow open to the max the draw was a little tighter than I prefer – but not enough to bother me too much.

The only thing that does take a bit of getting used to is the noticeable, but split, second gap between hitting the fire button and getting the coil to fire. I must admit it did take me awhile to get used to that but persevere and you’ll soon adapt your vaping style.

The intrusively large MAX fill etching on the side is a bit of an eyesore, to say the least – but that’s just dressing really and doesn’t detract too much from the overall pleasing to the eye appearance.

The build quality is impressive with no raggedy bits or blemishes and the simple to slide open battery compartment in the base is a secure and easy to use.

The OLED screen is on top of the mod making it easy to double check your vape settings and the plus and minus control buttons are responsive if – for me anyway – the wrong way round!

Minus first then plus? Just seemed a little odd but then again the tiniest of criticisms.

The fire button has been placed at the top-side of the mod and is in a good position – so no thumb gymnastics required.

How Does the CUPTI Perform?

It’s a simple enough x5 clicks to turn on and off.

x3 clicks to scroll through the temp control settings of Ni – Ti – SS and NC.

Apart from those you can also opt for ‘full power wattage output’ of 75watts – however at that setting I did find the vape far too warm and indeed that dreaded slight burning taste even using the included 0.5ohm coil.

Holding the + and – button for 2 seconds flips the OLED screen.

Once you have your preferred settings holding down the + and – button locks them in.

You can either charge via the USB port at the base or via your own battery charger. At my preferred setting of 450F and 55 watts, I was able to vape all day before the OLED screen advised me to ‘Check Battery’ so expect a decent battery life if you are an average vaper.

The coil gave a decent flavour profile however the cloud production was very impressive – a few puffs and my room was filled with a sweet-smelling haze. As I already mentioned switching out your coils is a painless and relatively clean operation as you’d expect from an AIO device.

Once screwed back into place the OLED screen prompts you on what atomizer you have installed. A couple of times this wasn’t picked up but by unscrewing and trying again it soon worked.

Once I got used to the slighter tighter draw and that split second firing delay I’ve enjoyed vaping on the CUPTI.

The addition of the MTL ‘kit’ meant I was able to enjoy a delicious premium cigar flavoured e-liquid and can honestly say it was as close to smoking a ‘Cuban’ I’ve had since packing them up!

There’s a hell of a lot to like about the Kangertech CUPTI.

I love its simplicity – it’s convenience and indeed the whole device is intuitive and simple to use.

It fits snugly in the hand is only slightly smaller and a tad heavier than my favoured CoolFire IV TC 100 and the 5ml tank despite chucking out the clouds and holding a good flavour profile is easy on the e-liquid.

Would I replace it if I dropped it off a cliff? Not that I’m an avid mountaineer but yes I definitely would.

I don’t like the MAX fill line across the side of the CUPTI but you get used to it.

The join of the coil to the chimney as seen through the Pyrex can deceive the eye into thinking there’s juice in that there tank.

After that nasty dry hit I did become a bit more diligent on checking – but you do have to tilt it a bit to make doubly sure you have liquid in the tank.

Not sure if that’s the same with the white model?

Despite my early reservations on using a so-called All In One Tank the CUPTI has charmed me!

For those vapers who just want to fill up and vape this is an ideal option.

The simple coil changing system and the generous 5ml tank makes this a go-to for those of us looking for a no nonsense all day vape that can adapt to individual vaping styles.

The addition of the MTL coil and drip tip means this is an absolute must-have device for those like me who enjoy the occasional mouth to lung vape.

And of course, it’s a great entry vaping mod as it can handle and deliver a superb vape experience as your vaping tastes grow.