A detailed American scientific study of vaping backed by the FDA has concluded that e-cigarettes are much safer than smoking – the first time any Government backed report has done so.

However the Public Health Consequences of E-Cigarettes isn’t all a love-fest of vaping with some curious findings that go against what we’ve learned so far – more on those later.

OK scientists from the powerful National Academy of Sciences, Engineering and Medicine came out with a total of 47 pieces of evidence proving vaping is far far safer than lit tobacco and this is the first major study from the USA to do so.

Their findings almost mirror those of Public Health England who categorically say vaping is 95% safer than smoking and have done so for some time.

Indeed the 47 points in favour of vaping is graded in the study with ‘conclusive’ being the strongest and the report states:

The team of experts trawled though over 800 pieces of peer reviewed studies to reach their conclusions and the key positive findings are:

There’s Good News And Not So Good News!

However it isn’t all good news and indeed considering this is such a high powered and well respected body of experts – some of their conclusions particularly those with ‘moderate’ evidence leave a lot to be desired.

Take their findings on so called passive vaping – something I thought we’d blown away as a myth.

Not so say the experts:

Well of course the vapour we exhale being denser than the surrounding air is going to add to the short term – but what’s in that vapour is and has been proven to be harmless!

I guess that tit-bit of fact won’t stop the mainstream media pouncing and it’s the same as the ‘safety’ aspects around e-cigarettes which I’m sure will get more air-time than the positives.

Those three make for grim reading and I’m not about to make light of those findings – but I will say this:

On that last one I’d add it’s OK to buy a gun in the USA but e-liquid needs to be carefully considered because of its dangers?

Doesn’t make much sense to this old English bloke.

Yeah You Guessed It – What About The Kids?

Sadly and once again the door has been left open for the ‘what about the kiddies’ anti-vape brigade with findings that goes against the grain of similar studies conducted here in the UK.

There is substantial evidence that e-cigarette use by youth and young adults increases their risk of ever using conventional cigarettes.

Quite where they get this grandiose statement from – as in what peer reviewed study findings – isn’t made clear – but I can guess lol – look all up to date evidence suggests that so called young vapers are tiny – more like minuscule – in number and come from smoking which is far worse for their health! See my article Once Again…NO Vaping Does NOT Lead Kids To Smoking to see how I rebuffed that study coming out of California.

This whole vaping is good vaping is bad argument between scientists – the media – vape advocates – bloggers and the likes of me – is a bit like a game of tennis but with significantly more important outcomes to any eventual winners.

Of course the scientists who came up with this study aren’t resting on their laurels and why should they given the Government cash cow will fund such studies – and yes they are calling for ‘more studies’ and ‘more evidence’ around vaping.

I still wonder why there’s so much almost microscopic studying going on into the whole vaping thing.

The cynic in me can’t believe the vast majority of these studies are coming from a 100% hand on heart swearing on all this holy genuine desire to find out once and for all if they’re safe or not.

Vaping studies are dare I say fashionable and these scientists and researchers ain’t stupid.

They know there’s plenty of backers out there – some with good intentions others with bad – willing to hand over a nice chunk of change with the added bonus of a named peer reviewed paper and 15 minutes of fame.

And that’s why we should remember that for every scientific positive we get faced by a scientific negative with a call for more cash and more studies.

OK I’m probably being a little too cynical and will of course take the positives’ from this particular study and welcome them – shame about the negatives but hey what can ya do!

So Is This A Game Changer For American Vapers?

In conclusion to the study the National Academy of Sciences, Engineering and Medicine say they believe in the short term e-cigarettes will and are having a positive impact on the health of vapers:

Until more definite scientific data are available, population modeling can help estimate the balance of potential benefits and harms. Under the assumption that e-cigarette use increases the rate at which adults quit conventional smoking, modeling projects that use of e-cigarettes will generate a net public health benefit, at least in the short run.

The harms caused by the higher rate of conventional cigarette smoking among youth who had used e-cigarettes will take decades to appear. For long-range projections, the net public health benefit is substantially less, and under some scenarios the net impact is harmful. 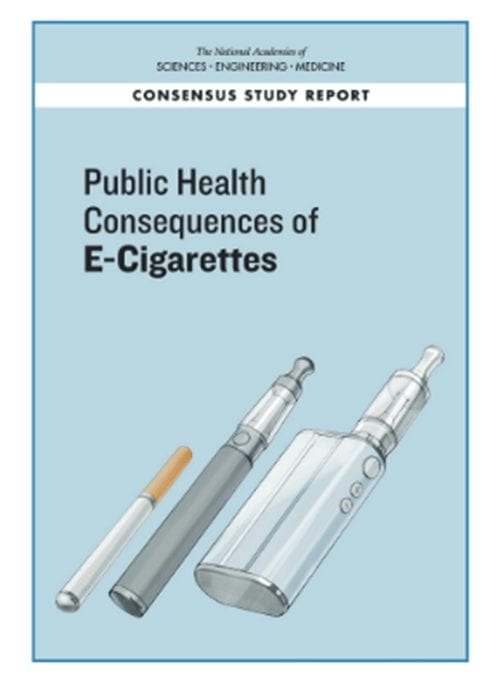 Maximizing the potential health benefits associated with e-cigarettes, the report says, will require determining with more precision whether and under what conditions e-cigarettes help people quit smoking; discouraging e-cigarette use among youth through education and access restrictions; and increasing the devices’ safety through data-driven engineering and design.

Like I said these days we have to take any positives – so is this really a ‘game changer’ as I called it for the average vaper in the US?

It could be – especially if the American vaping advocacy groups get their acts together and begin promoting the positives.

As always we’ll let you know of any developments.

You can read the full report here: The Public Health Consequences Of E-Cigarettes