With the recent release of the Turbo V2, Rubik and now the Hollow Point RDA, Tobeco are really working hard to make inroads into the affordable genuine RDA department, whilst trying to offer something with a unique and offbeat design, and at the same time stepping away from the mass producing of clones that they were previously very well known for. The new RDA releases from Tobeco have been a little hit and miss recently, the hits have thankfully outweighed the misses so far, but does the Tobeco Hollow Point hit the target?

And that’s it really, no blue screwdriver, which personally I’m quite happy about as I have far too many of them anyway! The Tobeco Hollow Point will come in the ubiquitous black packaging Tobeco are known for, and the Hollow Point RDA is available in either silver or black colours.

Another Tobeco RDA offering easy setup, which will be appealing to beginners. Pleasingly, I found my Hollow Point was clean and free of machine oil upon delivery, so that saved it from being put through the ultrasonic! As with any new atomiser however, I would highly recommend checking your unit out for any traces of machine oil should you decide to purchase the Hollow Point RDA.

The top cap comes away from the build deck with little force required allowing you quick and easy access to the build deck. You have four posts available with large post holes, you won’t have any issues at all building on this deck! The negative posts are also milled into the deck which increases conductivity.

I have seen this RDA as touted as having a large juice well but I do disagree- it’s certainly smaller than a lot of others out there however it isn’t a major issue. It’s easy to re drip- the delrin drip tip is detachable from the top cap and it’s easy enough to drip down through this onto the centre posts.

The Hollow Point RDA can be built with either a single or dual coil set up, if you prefer to use single coil set ups then one side of the airflow can be blocked off easily with the AFC ring whilst leaving the other side open.

How Does The Hollow Point Perform?

Flavour was really quite impressive. Starting off with vaping my own DIY mixes to test it out yielded some really good results, the flavour was certainly a lot better than a lot of other RDA’s I have tried. With more complex liquids I found myself trying to identify certain flavour notes that I could identify in other RDA’s, but it was by no means a bad experience.

There wasn’t really any leaks to speak of whilst using the Hollow Point. The only time it did leak was through user error when I over-dripped too much juice on the deck which caused leaks through the airflow lightning slots, otherwise sticking to the method of removing the top cap and dripping my chosen juice down onto the posts so my wicks absorbed the juice from the juice well seemed to work really well and keep things nice and clean! 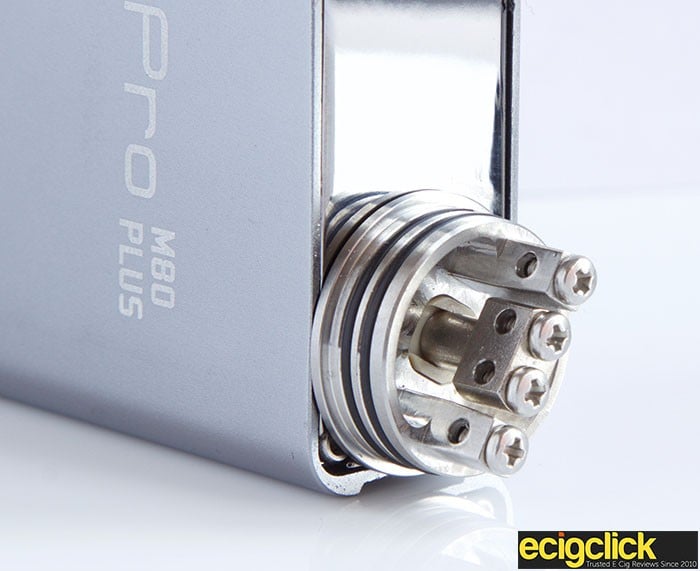 I’ve only had some issues when running the Hollow Point at over 70w and chain vaping it, I have found with a couple of different builds that it has got very hot very quickly, and the drip tip is quite short so you need to be careful you don’t end up with any nasty burns on your lips! Other than that, I’ve been quite impressed with the performance of the Tobeco Hollow Point.

I must say a big well done to Tobeco for coming up with an RDA that has an offbeat and appealing design, which also performs admirably well in the flavour and vapour departments respectively, whilst being absolutely dirt cheap too!

The Tobeco Hollow Point is available ridiculously cheap, even cheaper than some cloned RDA’s out there, and it’s a bargain for the price considering as you get an RDA with a great design that actually performs really well, and is an ideal RDA for newbies to learn how to build on given the single or dual coil build options, relatively large build deck and generous post holes. The Hollow Point RDA definitely hits the target in my opinion!