Good news for smokers and the vaping industry as the government of the United Arab Emirates announces its decision to lift the ban on all things vape by April this year.

Despite being ‘illegal’ in the country many vapers openly vaped in public calling on the government to legalize it. Last week the Emirates Authority for Standardisation and Metrology [Esma] announced new regulations on nicotine suggesting a change in the law.

This was confirmed by Abdullah Al Maeeni, top boss of Esma who said:

We issued the regulation to legalise it, and it will be enforced by mid of April 2019, as the Authority is working hard through the development of technical standards and regulations.

In a bid to keep up with their American counterparts doctors in Canada now say there’s a teen vaping ‘crisis’ in the country.

They quote latest figures showing one in four young Canadians have tried an e-cigs – yeah tried being the operative word. They haven’t linked to the ‘study’ and as per usual offer both generalization and BS to back their claims.

They may have cleverly changed the wording from ‘epidemic’ to the lesser worrying ‘crisis’ but are still calling on the government to do more to stop teens from experimenting. The product is attractive. It’s very easy to use. You’ve got a very high dose of nicotine. And they taste good. This is the cocktail you need to make the product attractive and popular among youth.

Meanwhile Dr. Julius Erdstein from Montreal’s children’s hospital says a recent campaign warning teens of the ‘dangers’ of vaping is “too little too late” and for some inexplicable reason links the use of cannabis to vaping adding:

A case of we don’t know what or why they should be banned but ban them anyway?

BTW the bit at the end of the quoted article made me chuckle. Good to see entrepreneurship alive and well – even if in this case it was punished 😉

To coin that infamous WW11 phrase JUUL is already “over paid – over sexed up and over here” but have just announced a major roll out of the brand in the UK.

Not content with projected profits of $3.4 billion this year alone – the vape company – that pretty much threw vaping under the bus to protect its profits – now plans to flood UK shops with its brand. And unlike America where they pulled all flavoured pods from stores including bona fide vape shops – they have no plans to do the same here.

The company already sells its products in UK supermarket giant Sainsburys and are now hoping to launch in ‘convenience stores’ up and down the country.

For the UK launch, we followed the same process as we did when we launched in the US in 2015 – get into specialist vape, then into some key accounts before heavily targeting convenience.

That strategy worked incredibly well for us and Juul now has more than 75% of the vape market in US convenience.

There is a real appetite for the brand and we now want to ensure that current Juul users and those smokers who want to make the switch from tobacco can easily find Juul in their local store.

There’s no doubt the company is extremely popular and it will be interesting to see how UK sales go.

Chicago Gets Tough On Under Age E-liquid Sales

The tough talking anti-tobacco mayor of Chicago has announced yet another law suit filed against online vape shops that he says is selling e-liquids to under age kids.

A similar suit was filed against 23 vape stores back in November and now Mayor Rahm Emanuel is taking 4 stores and 27 online retailers to court. The November law suit saw 3 retailers stopping the sale of all e-liquids and one bricks and mortar vape shop leaving the city altogether.

Chicago’s young people are our future, not Big Tobacco’s future customers. We will continue to take aggressive steps to keep our children free from the dangers of addiction, protect our residents and fight for a healthier Chicago.

Manufacturers and sellers of e-cigarettes were put on notice that Chicago is willing to take legal action to prevent them from peddling their products to Chicago’s youth, and this second lawsuit demonstrates our commitment to protecting youth and policing online retailers.

All retailers are subject to the same ordinances and restrictions and under no circumstances can they sell products to minors in Chicago.

Can’t argue with any reasonable attempt at preventing underage vape sales if I’m honest…however once again a knee-jerk reaction to the so called ‘teen vape epidemic’ and a back door ban that if successful will not only affect businesses but also adult vapers and those looking to quit smoking.

Another week and another attack on vaping over the pond…

VPZ – formerly known as Vaporized has a deal with Rangers FC and have now begun sponsoring Hibernian FC.

However the report in the Scotsman newspaper suggests health experts are against the deal with no evidence or quotes to show that…read the article and see for yourselves!

We are delighted to partner with VPZ, who have intrinsic links within the local Leith area as well as being a national brand.

As a business that was born in Leith, we are very excited to be launching our partnership with Hibernian Football Club. Vaping represents a huge public health opportunity and our goal will be to engage with fans to help them make the switch and quit smoking for good.

Consumer education is crucial too and we will also be investing heavily in our people strategy to ensure our teams are equipped to help smokers understand the evidence based public health opportunity of vaping products so that their positive impact can be maximised.

Yet another own goal for the anti-vaping team?

However if you’re an American politician jumping on the ‘we gotta protect the poor kiddies’ bandwagon to help out an anti tobacco charity desperate to get in on the ‘ban all the vaping things’ movement – you simply use legislation to change the definition!

Sadly I’m not joking. Florida’s senator Debbie Mayfield is so concerned her local Tobacco Free Florida Campaign can’t battle against all things vape – she’s asking for vaping to be classed as a tobacco product…haha…oh my…must…not…laugh…

Vaping and E-cigarette use among our youth has reached epidemic levels. Now is the time to take action to protect our young people from all tobacco products.

Read my lips…It’s not a tobacco product…

Sadly it really isn’t funny at all especially for Florida’s vapers and of course those looking to quit smoking.

Dr. Barry Hummel, Pediatrician and Co-Founder of the QuitDoc Foundation loves the idea:

The use of electronic cigarettes and vaping devices has exploded among Florida youth despite the current restrictions on sales to minors.

This is because many vape shops are operating under the radar because of a loophole that does not require them to be licensed as tobacco retailers.

This legislation will not only make the classification of these devices consistent with Federal law, but it will also help law enforcement agencies locate and identify Florida retailers who are illegally selling these products to children and teens.

Police are hunting a prankster who sent a letter saying vaping was to be allowed in school bathrooms!

OK the letter was sent via social media and said students would now be allowed to take one hit on an e-cigarette for every bathroom break they take…labeling it the EB One (Hit) Initiative! As funny as it sounds the superintendent of the school in East Brunswick, New Jersey USA was definitely not amused saying:

It had my signature at the bottom. It looked like legitimate letterhead, but as I started to read the content I realized very quickly it was a forged document. It was so professional looking that people thought it was a legitimate letter.

We’re actively investigating along with the East Brunswick Police Department. We’re probably looking at a long-term suspension for the student.

I know I shouldn’t laugh but come on…in the scheme of things this doesn’t deserve a bloody police hunt and ‘long term suspension’ surely!

These anti-vape types should lighten up 😉

Stop Press: sources say the student has ‘owned up’ and the superintendent will NOT be filing charges…great news lol

and finally part two…With This Vape I Thee Wed!

Newly weds are now saying ‘I do…vape’ to each other and their vapes!

According to glossy magazine Elle no less wedding photographs showing the bride – groom and guests blowing a few clouds is gaining in popularity! 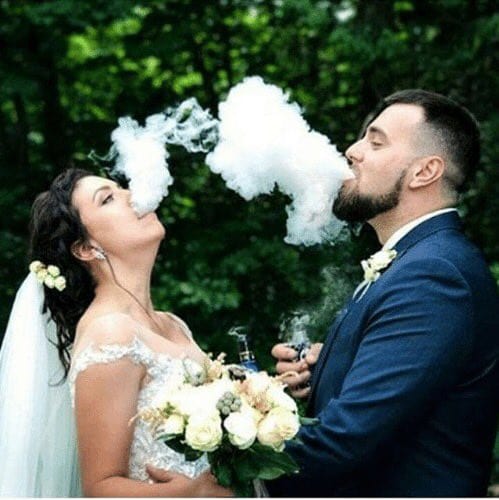 So popular in fact a tweet on the subject recently went viral and Reddit has a whole page dedicated to the cloud chucking ceremonies!

Did you know vaping wedding photos were a real thing? Lmao. Now, you do. pic.twitter.com/4JBAJCKRjo

A case of for richer or poorer in no sickness and good health because of vaping maybe?