MTL is a vaping style usually preferred by ex-smokers and it is designed for high nicotine or nicotine salts e-liquid with a restricted airflow to mimic smoking. Also as the nicotine level is high these tanks generally run at lower power with a high resistance coil. Read our guide to MTL and DTL vaping for more details.

After years of neglecting the MTL rebuildable market it now seems the vaping manufacturers have created a resurgence in this – I am too a victim – recently loving the Vandy Vape Berkserker Mini MTL RTA and the Digiflavor Siren 2.

The Zeta as you can see is very pretty and Asvape state that the design is inspired by 17th century Baroque. It certainly is very ornate.

This is only a small diameter tank at 22mm and 2.5ml capacity. There is a top fill cap which you remove to refill. The build deck is for single coils and has a ceramic base and cover to apparently aid taste and vaporisation. You even get 2 pre-made coils in the kit.

The clamp screws are on the side of the deck and the coil legs drop into the deck through the ceramic base.

There are 2 colours to choose from – Black and Silver. This is a very pretty little RTA.

I wish the Asvape website had been translated a bit better as I am still a bit in the dark about the airflow system. It simply says “Airflow screws replaceable” and there appears to be an airflow adjustment ring on the base of the tank.

Will you be adding the Asvape Zeta MTL RTA to your collection? Let me know in the comments below! 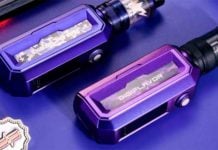