The Eleaf iJust ECM is a pen style battery mod with the ECM tank as a topper. Eleaf Electronics Co Ltd started life in China back in 2011 manufacturing quality E-Cigarettes. They were responsible for bring us the ever popular iStick series – 20w, 30w, 50w, 100TC Eleaf have simply a huge product list, some of their latest products include Iwu pod mod, Pico Squeeze 2 and of course the iJust 3 that we reviewed not long ago.

Today we are going to cast our eyes over the iJust ECM Kit! So what do we think? Is the kit worthy of the iJust title?…………. The ECM Kit was sent to us for the purpose of this review. As always my thoughts and views are my own.

Check Out My Hands On Eleaf iJust ECM Kit Review


Free WorldWide Shipping – Plus, Save 10% With Code ECC

The Eleaf iJust ECM Kit comes in a card box with an over sleeve, the product is well presented in the box and has some spare parts and micro usb cable. The design of the Eleaf iJust ECM battery is very similar in looks to that of the iJust 3, albeit with a cheaper feel to it; both being regulated tube mods or vape pen mods both are a great deal thicker than a pen though lol.

While both have built in internal 3000mAh batteries the iJust ECM will only fire up to 40w of power, half of that of the iJust 3! The design and quality is good. Made of spray painted aluminium alloy, each body style in the range of the ECM kit has a different pattern depending on the colour you select.

As you can see I have the black version it has lines or dashes on it! Like the iJust 3 the body of the ECM battery has stainless steel highlights top and bottom, a stainless steel coloured plastic triangular fire button “which has a fair click to it” and sits very proud of the body.

The LED lights are very visible when you press the fire button as they are via the micro usb port on the reverse of the device. The lights change colour as the battery degrades. To turn on and off it’s a simple 5 quick clicks of the fire button.

The 510 connection has cut outs for those that use tanks with 510 airflow, the threading is well turned it has a spring loaded gold plated pin. Surrounding the connection point, you have all the normal battery information the SS cap has a cut out pattern around the outside to match the bottom cap decoration! The bottom cap has a small battery vent hole that is surrounded by a decoration of a hook like pattern. While Eleaf don’t call the tank the Melo 4 anywhere in the literature I have read, it is very similar in looks to the Melo 4 my wife uses on her iKuun 200. The tank is a good weight and is constructed well; it is a good design and quality of feel to it. Made of Stainless Steel/Pyrex/Delrin, the colouring is a good match to the battery. The tank dissembles in to 5 parts including the coil for easy cleaning. The bottom of the base has the normal info laser etched on to it; the 510 threading is well turned with a silver plated pin. The airflow ring is painted to match the battery and has a wide dual Cylon stop type AF “the setting on one side on mirrors the other”, the base has a SS highlight that holds the silicone glass stopper ring, the coil screws into the top part of the base. The Pyrex glass tank will hold either 4ml or 2ml depending on what country you purchased the kit! You will find a spare in the box. This assembly comes in one part and is made of SS. The chimney houses the threading for the coil making the chimney shorter for better flavour. The fill port is revealed by pushing back the cap cover – find the mark on the side of the cap and push that way – the kidney fill port is surrounded by a silicone grommet, there are 2 spares in the box, the cap is the same colour as the base and holds the drip tip. This tank utilises the new EC range of coils. The EC-M 0.15Ω comes pre installed in the tank and the spare EC-N 0.15Ω is in the box. Both coils are Kanthal mesh. The coil screws into the base and the top cap assembly screws on to the top of the coil. A Basic Guide to Using The Eleaf ECM Kit

To change the coil with this tank you will need to completely empty it of all liquid or risk a flood.

Tip: Leave the tank for a few minutes to soak up more liquid be for firing for the first time, if the cotton isn’t sufficiently soaked you will burn the cotton rendering the coil useless.

How Does The Eleaf ECM Kit Perform?

For this review I have filled the 4ml ECM tank with Chicken Shop Deep Fried Jam Donut. The coil installed is the pre-installed EC-M 0.15Ω. Together they both have a good look and feel in the hand to them. Airflow (AF) wide open and with a direct to lung vape, the flavour was fair, the vapour production was ok.

I was disappointed with the heat at full charge, it was rather a cool vape, not all that surprising considering the total output of the battery is only 40w. The draw was also kind of loose so I dropped the AF down to half and the draw did tighten up a bit. I dropped the AF down again to about a ¼ open and was able to get a passable mouth to lung style vape!

Again the vape was to cool for me; the resulting vapour production was again fair.

I hate to say this but I am really disappointed in the functioning of this pairing! As the battery LED colours changed so did the functionality. By the time the device had reached less than 30% power I had the AF closed to almost nothing the vape for the want of a better word was pathetic! Hardly any vapour production! I thought it was me! So I took the tank and placed it on the iJust 3! And put a 0.4 coil in my Jwell Odeon v2 on the ECM battery both worked great! I used the tank until the iJust 3 power was blue (29%) with the AF open to half I had no problem, the vape was warm tasty and cloudy for both!

The coils they have supplied with this unit are 0.15Ω, they state that the battery will fire as low as 0.1Ω I disagree! The ohms are simply too low for the battery to cope with as it degrades in power. With the AF closed to ¼ the battery did last quite a long time 5hrs approx before recharge, although the frustration of cool and vapour quality made me want to charge the unit after it reached 30% power lol.

My opinion is that Eleaf have made a fundamental error with this kit! In supplying 0.15Ω coils with it, the battery produces only 40w, the unit struggles to fire the coils after the power has dropped below 30%! Separately the tank and battery work fine but together they need a higher ohm coil my suggestion would be 0.5Ω or 0.4Ω, thereby making this kit suitable to those that are switching up from other devices like a pod system!

Would I buy the Eleaf iJust ECM kit again as a replacement for this one? I can only give one answer as the kit stands now “NO”.


Free WorldWide Shipping – Plus, Save 10% With Code ECC 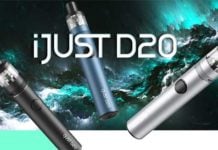