The Artisan RTA comes from US based Envii (pronounced Envy) hailing out of Los Angeles, California. You may or may not have heard of them before but chances are you could quite well have a vape product such as a mod or an atomiser designed by one of its four founding members.

If I mention 213 or that famous Loch in Scotland you might know what I mean. If not it was just a bit of a moonshot anyway 😉 Check out Kevin Jeffrey’s (aka The Worthing Vaper) review of the Envii Terra RTA for more background on the company.

Today we’re going to be looking at an RTA that I picked up purely on an impulse buy just before the May 20th deadline for the TPD.

So, without further a do lets get up close and personal with the Artisan RTA by Envii.

On first inspection, you wouldn’t be wrong in think that the Envii Artisan RTA is a bit of a ‘Plain Jane’.

In fact there’s nothing visually striking about it, even down to the ‘envii’ branding and device name which are ever so subtly engraved and the base of the RTA. And that’s not a bad thing!! The Artisan is primarily of a stainless steel construction centred with a pyrex glass tank section.

Size wise, the RTA measures 22mm in diameter and 46mm high, excluding the threaded 510 connection, so it will probably look a little lost on a large vape mod. The drip-tip is constructed from black delrin with an internal bore of approximately 9mm and connects to the top cap by means of a friction fit, so no o-rings. You can of course use your own drip-tips as the top cap is 510 compatible.

Internally, we have the chimney section which runs down from the top cap to a small chamber housing containing the RBA deck. On each side of the chamber there are two generously sized juice ports each measuring approx. 3.0×3.5mm.

The base section of the RTA contains dual cyclops air flow control ring, with each air flow hole measuring 13.0×1.0mm.

Now onto where the magic happens, the RBA deck. 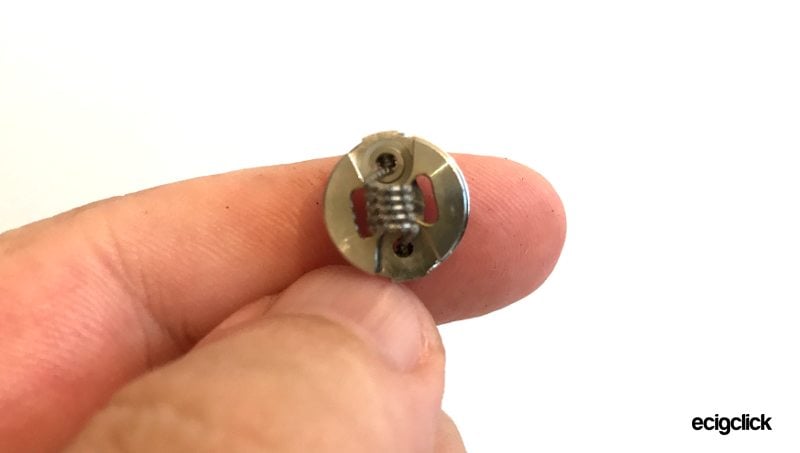 The deck of the Artisan is very compact but very well thought out! Completely post-less, and with a central airflow channel which directs the air from below to hit both side of the coil.

Your coil is positioned so that the coil legs drop down into the deck and are then held in place with two small grub/hex screws. Simple!! Now, you’re probably think, how do you pulse and pinch your coil once it’s installed into the deck. Well Envii have thought of that too!

Provided in the box there is a RBA ring, which allows you to connect the deck to the base section of the tank for just that purpose. Smart or what! 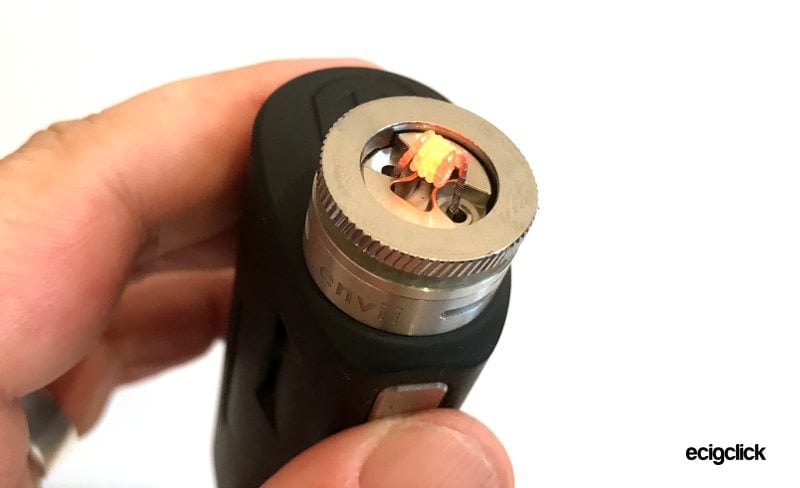 So, that the design and build done now let’s move on to the Artisan’s performance.

How Does The Envii Artisan RTA Perform?

I very quickly discovered that when wicking the Artisan you really do need to keep your cotton nice and fluffy, as the juice ports on the chamber are deceivingly big. For my build I was using a pre-built 3.0mm diameter ‘Tiger Coil’ which came in at 3.5ohms and for wicking it was my firm favourite, some ‘Kendo Vape Cotton – Gold Edition’. For this review I was using Apollo O’ So Good e juice which is a 80/20 VG/PG e-liquid which I have been good friends with for quite some time, so I know exactly how it will vape J

Wattage was set at a modest 45watts to start with, airflow open to about half way.

All I can say is WOW!! Flavour was exceptionally good as was vapour production with nice thick clouds.

Cranking the wattage up to 55watts and completely open the airflow produced some incredibly good flavour. Vapour production was dense and creamy.

Mouth To Lung (MTL) vaping was achievable on the Artisan albeit a very loose draw, but still quite enjoyable.

In simple terms ‘EVERYTHING’!! Yes I like all aspects of the Envii Artisan RTA. Building it was relatively straightforward; just remember to keep that cotton nice and fluffy.

Flavour and vapour production were a complete surprise to me! I had expected it to be pretty average, but I’m very pleased to say that I was proved wrong on that score.

I’m finding it difficult to find anything I didn’t like about the Artisan RTA. I’ve had no real issues with the device, apart from users error J OK, maybe some knurling on the top cap for us folk with chunky fingers but that’s it!! It may look like a ‘Plain Jane’ but in truth the Artisan by Envii is a well designed and engineered RTA which provides exceptionally good flavour and vapour production.