The Geekvape Flint Kit is one of the latest releases from Geekvape featuring a 1000mAh internal battery and sitting atop is a 2ml capacity MTL Tank.

This is a very small, portable device that finds itself wedged very firmly between a plethora of Pod systems and a regular device. It’s designed for mouth to lung vapers and pairs very well with nicotine salts, more on that below. 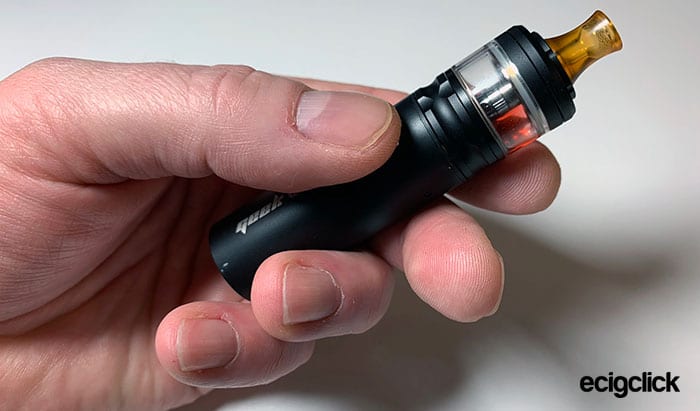 The Geekvape Flint sits very nicely in the hand and is an ultra portable device and could very easily be put in a pocket or hand bag. In fact, you would hardly notice you had it as it weight next to nothing at all.

I received the Flint Kit in Black as you can see from the image above. The kit does come in four colours in total, Black, Gunmetal, Rainbow and Serenity Blue. The Geekvape Flint kit was sent to me for review. As always, I will give you my own, honest opinion of this product after a lengthy testing period.

See The Geekvape Flint in Action With My Video Review The Geekvape Flint Kit is very well built and designed for ease of use. As you can see from it’s small footprint sits very nicely in the hand. The fire button is nicely placed on the body. The Mod itself can be stood up whilst charging which is always a plus in my book. It’s great design is in its simplicity. As already mentioned, the battery for the Geekvape Flint Kit is internal but there is ample vent holes on the bottom of the device.

The Geekvape Flint Tank is also simple in its design and features 5 air intake settings. I find that there is more than enough settings on this Tank to suit even the most hardened MTL vaper. The tank when atop the Flint battery blends in nicely and to look at it you would think that it’s an all one device. The Tank is your standard, as I call them, “Plug and Play” screw in coil and very easy indeed to change out.

To insert the coil into the tank:

One thing to note, though I haven’t found it a problem at all, is that the drip tip is non interchangeable and fixed to the Tank.

How To Fill The Flint Tank The performance from this Tank for an MTL device is very good indeed and gives a nice flavour certainly compared to Pod devices and up there with other MTL Tanks. If you are looking for clouds, as with all MTL devices, you aren’t going to get any here.

There is no display on the device, though, there is a light indicator allowing you to change the output of the device from low (3.2V), medium (3.5V) and high (3.8V).

This small light also doubles up as a battery level indicator.

The Geekvape Flint kit is easily recharged via the inbuilt USB slot on the body of the device.

How does the Geekvape Flint Kit Perform?

As with any device I get sent for review, I usually don’t know beforehand what I will be getting. It’s a little bit of a Vape lucky dip.

When I opened the box, I was like, oh, what’s this, it’s a little bit small. After setting up the Geekvape Flint Kit and doing a little research online, I found out that this setup is specifically designed for an Mouth to Lung (MTL), Nic Salt vape.

I used some old trusty Vampire Vape Pinkman Nic Salts. As with any MTL device, every MTL vaper has their own preference to how they MTL. Some people prefer a tight draw, others not so much.

Whilst using the Geekvape Flint Kit, I had the air intake setting on the smallest hole as I prefer a rather tight draw. I’m more than confident that even the most ardent MTL vaper will be able to find a setting that is right for them.

The Geekvape Flint Kit performs very admirably indeed. You aren’t going to get superb flavour and huge clouds, this is an MTL device and a very solid MTL device it is.

That being said, if you just simply want an MTL device that is ultra portable with more flavour than the normal Pod system, then you need not look any further than the Geekvape Flint Kit.

The flavour you get from the Geekvape Flint Kit is certainly a step up from the average Pod system. You get above average flavour from the Flint kit but you won’t sit back and say “wow, that’s stunning”.

Vapour production, what vapour production. There really isn’t any clouds to speak of at all, in fact, I have had bigger clouds from some Pod systems so that in turn makes this a perfect stealth device.

In my job (I work in people’s homes) if I want to vape, it is always a Pod system I use. I have been using the Flint Kit over the Pod systems mainly because the flavour from this is superior to the majority of them whilst remaining as small and portable. The battery life from the Geekvape Flint kit is superb and I only charge it every couple of days.

In conclusion, if you are on the lookout for a something a little more than a Pod system, the Geekvape Flint Kit is certainly the way to go.

Vapefly Galaxies Kit Review – You Don’t Have To Be Big To Be Tough!