It seems there’s one thing us vapers can never get enough of: Power! Whether it’s the max Watts or the quest for more mAh we love it.

Limitless Mod Co and iJoy have sent me what they claim is both, in the shape of the Limitless Lux mod, a dual 26650, 215W powerhouse. The parcel the courier handed over was pretty weighty and inside were three packs: The Lux mod, a pack of iJoy 26650 cells and an additional wood finish sleeve for the mod.

The cells are claimed to be 40A continuous (85A pulse) with a capacity of 4200mAh. They arrived well packaged and wrapped, with their own authenticity codes.

The wood effect sleeve came protected in a foam tray inside a matt black and silver box.

That matt black and silver theme carries over into the packaging for the Lux mod itself, very understated with the device name imprinted on the sides in spot gloss, and in silver on the lid.

The rear shows the absolutely minimum of information, some company identifiers and an authenticity code.

Opening the packaging we’re first presented with the Lux itself nestled in a flocked foam tray.

Lifting this out we find a cardboard support beneath which are instructions, warranty card, native American themed stickers and a micro USB cable.

The Lux mod is an imposing beast. Styled as it is in its default guise of black and brushed metal it has a serious air. Its dimensions carry that forward, with the Lux standing a smidge under 102mm tall, 58mm across and 31mm deep.

The weight of the device conveys the same message. Loaded with the two 26650 cells it comes in at 354g

The top of the mod has a recessed, properly sprung 510 connector, a 0.66” OLED display and two up/down control buttons, with a nicely sprung fire button on the front edge. The sides of the black sleeve have the LMC and iJoy logos, whilst either edge has diagonally deep cut ventilation slots. These slots are echoed in the diagonal indents on either side of the top of the mod. On the base we have the Lux name, Serial number, “215W Max” and “Co-designed by iJoy and Limitless” engraved. Gripping the sleeve and the top of the mod and pulling upwards the two parts separate with a magazine like snap, the two being held together with a combination of magnets and a sprung ball/detent retainer. The sleeve is black coated alloy with the brushed metal base friction fitted. 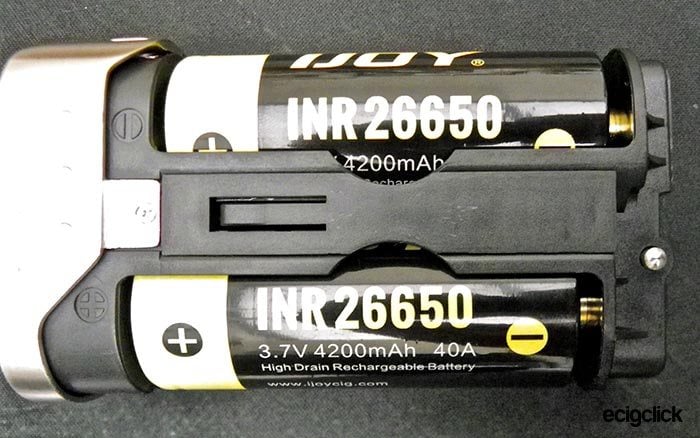 The wood finish sleeve is in reality also metal with a paint coating and lacks the logos on either side. Beneath the sleeve we find the cell holders, both with a sprung connector at one end and clear polarity markings.

We also find two 18650 sleeve adaptors so the device can be used with smaller cells as an alternative. Between the two holders is a central column of plastic. At the top rear we find a micro USB connector which is, unsurprisingly, only for firmware updates. To the IWEPAL chipset, a specific to iJoy item.

No firmware updates are currently available.

With cells fitted 5 clicks turns the device on/off, you’re presented with a flash screen showing the logos, then the default settings of 30W in VW mode. The up/down buttons step the power in 0.1W increments, accelerating nicely if held down… until you reach 99W. The mod then switches to 1W per click or jumps of 10W if held down.

Which is probably just as well with the 215W top limit.

Three clicks take you into a menu with 6 symbols:

Each setting is selected with a click of the fire button.

Scrolling past the end of the range will switch you between F and C. Another press of the fire button followed by the up button allows you to adjust the upper power limit.

That last menu item, the bar graph, takes you to a sub menu where the power ramp can be chosen.

There is currently no TCR mode.

The rest of the specs are;

How Does The Limitless LUX Mod Perform?

The Lux is surprisingly comfortable to hold and use despite its size and weight. The fire button fits nicely under the thumb or forefinger and the top mounted screen is clear and pleases my inner geek in being able to see what’s happening in TC modes.

Until of course it gets covered in condensation which can happen with some vape tanks and RDAs.

The cells, unsurprisingly, took the best part of a day to charge fully in my Nitecore D2 charger but they barely became warm in the process. The cells fit snugly in the holders and don’t wriggle about.

Sadly, I was unable to test the 18650 holders as iJoy recommend a minimum of 35A continuous cells (40A continuous for 26650) but they did fit my 18650s snugly without being impossible to remove.

At lower powers that reserve of 2 x 4200mAh cells is a joy, I went almost two full days without needing to think of charging.

The TC modes were accurate although limited by the lack of a TCR mode. Perhaps a firmware update might sort that.

Hopefully a firmware update will also sort one other niggle – When replacing the cells in TC mode the temperature and power settings are reset to defaults, but VW mode is unaffected.

However, switch between TC and VW modes and you’ll find that the VW mode is reset to 30W, rather frustrating.

I was able to easily hit 200+W with the Troll V2 and Limitless RDTA+ using pretty hefty wires and there was minimal lag. But of course at such dizzying levels you’ll want much lower Nicotine e juice than normal and a few extra sets of 26650 cells because you’re chewing through the power even with these. That said it was rewarding and rather exciting to actually be able to use the mod properly at these levels for some time before the “low power” warning appears.

What wasn’t so pleasing was the poor fit of the sleeve which twists slightly around the main body causing a rattle and cheapening the feel of the mod.

This also concerns me in that were the mod to be dropped or twisted hard that plastic pillar could well snap, not something that sits well in a device that is both marketed and priced as a flagship, premium product.

The finish of the metal on the main body and the black sleeve have fared well, much better sadly than the thin wood effect paint on the other sleeve which lacks a decent hard-coat meaning it has picked up some easily visible scratches and chips.

I liked the Limitless Lux, it’s a good, competent high power and Temp Control mod. It’s comfortable to use and having that extra capacity is great at lower wattages.

But… This is a mod marketed and priced as a premium, top quality device. And sadly, it’s not quite there yet and won’t be sliding into my best vape mod list.

The firmware shows a lack of testing and has a gaping omission in there being no TCR given this is aimed at the market sector most likely to use unusual wires.

Worst of all however is the build quality. The paint on that wood sleeve is too soft, especially at the price charged for it.

The sleeve twisting around the body is sloppy and the use of plastic for the central pillar of the device smacks of a lack of thought or penny pinching.

Yes, I liked it and were I to lost this one I might well replace it. Just not at the prices being charged for it. Brand, you see, is not everything.

I was unable to update the firmware as the Lux I was sent is faulty, the USB connection is not recognised on any computer, giving an error saying the device has a fault.

Condensation from the base of atomisers (including the XL) collects on the top of the device and gets under the screen. Despite contacting iJoy about this several times over the last month by email and twitter they have not responded.

I therefore cannot recommend this device in any way.