The Next Vape Kit in the Endura Series Promises ‘Flavour Redefined’

The release of the Innokin Endura T20 shows the company’s commitment to not only beginners to vaping but also to the zillions of Mouth to Lung users out there. The Endura T20 is the third starter kit in the extremely popular series with the Endura T18, T18ii and the T22 still top choices with both newbies and those of us who enjoy a good MTL vape.

Topped with the TPD compliant 2ml flavour chasing Prism tank – which Innokin says is a lot more airy than its predecessor – the T20 has an internal battery available with a choice of 1500mAH or 1000mAH.

As you might have read in Jonny’s preview of the Endura T20 Innokin – has tackled the issue of ‘debris down your mouthpiece’ – never nice lol – with a nifty top that pops on and off and is screwed onto the base when in use.

OK that’s the history and a quick look at what the Endura T20 has to offer and live up to – so let’s take a look at how it vapes.

The two kits were sent free of charge from Innokin for the purpose of this review and I received a black and silver version – 1500mAH and 1000mAH respectively.

As always my views and opinions are my own.

An outer sleeve complete with the usual warnings and a diagram of contents is slid off to reveal a sturdy lift up box.

The kit and contents are nicely packed away and there’s plenty in there including two spare drip tips – however there is NO spare coil – which is pretty annoying to say the least. Obviously coils can be bought separately but even so I don’t think an extra coil would have shrunk the bottom line too much – more on the coils later.

Just to say here that my camera is ‘playing up’ so I have shown the 1000mAH silver kit and the black 1500mAH in the same shot – the contents are the same and obviously you don’t get both!

Innokin has moved away from the slightly box shape of the T22 and gone back to the standard – if a little chunky – pen style of device.

The protective top cap is a nice feature especially as whilst in use it pops onto the base of the device for easy storage.

I took this out a couple of times before realizing that and left it at at home and it was only after reading Jonny’s preview for the T20 I read that snippet!

The key feature here has to be simplicity.

It’s a simple charge – fill and vape device with no screen or settings to worry about – it really doesn’t get any easier than this.

As I’ve already mentioned you can choose between 1500mAH and 1000mAH batteries with the latter 20mm or so shorter.

We’ll look at the performance of them both in a wee while but first let’s look at filling – swapping out the coils and operating the device.

OK both of my kits were pretty much fully charged on arrival and the coil was inserted which meant the only thing to do was to fill the device.

How To Fill the Innokin Endura T20 Prism Tank

You can either fill (top fill) whilst attached to the battery – or unscrew the whole tank and remove from the battery. How To Change The Coils on the Endura T20

You cannot replace the coil with e-liquid still inside the tank. Once you’ve filled your tank it really is as simple as vaping gets.

It’s a solid enough piece of kit for what it is and the caged Prism tank should be able to take a few knocks.

The top / drip tip is Delrin and screws off and on easily enough with reasonable threading. 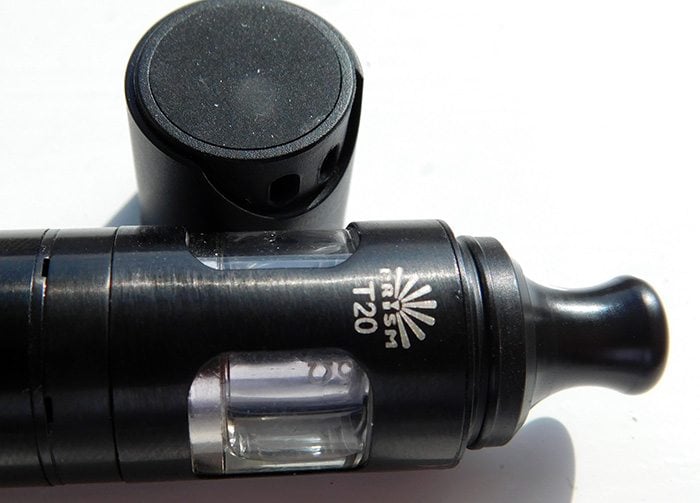 The protective cap can be a little tight to fit on the base but does its job well and is a feature I’m expecting to see a lot more of.

Design wise and with the protective cap on it does look like a large marker pen.

However with the protective cap off – it does look like there’s something missing if you catch my drift!

If you look at the photo above you’ll see what I’m getting at – maybe if the cap simply popped on and off like it does on the base things might look a little ‘neater’ – just a nit-pick!

The fire button is responsive but there is noticeable rattle whilst the caged Prism tank has similar shape and design to the Aspire Nautilus 2.

The threads on the bottom ring to release the coil are not so good and if you’re not careful you will cross thread them.

I suggest reverse screwing to get them lined up and take it slowly!

All in all it is what it is – a vape pen style device though it does feel lighter than others I’ve used.

How Does the Innokin Endura T20 & Prism Tank Perform?

I tried both the 1000mAH and the 1500mAH – the only real and significant difference – apart from size – I found was battery longevity – which is stating the obvious somewhat! Therefore I’m talking about both when it comes to vaping performance.

I tested both and agree to an extent.

On the 70/30 mix I did notice the slightest difference in wicking time – but only slightly and not enough to worry about.

There’s no airflow control which annoys me and given I haven’t used any of the Endura kits I found this to be a true mouth to lung (MTL) vape – as in it is fairly tight.

I tend to puff on an MTL vape much like a pipe – almost but not quite chain vaping – and found I had to work a bit harder to get a good lungful.

Throat hit was good at the giddy heights of a tobacco flavour at 18mg nicotine however on a 6mg fruity e-liquid the hit was much much smoother.

Once I’d completely emptied the batteries they took between 90minutes and 2 hours to fully charge and as I’ve said I got a decent 2 days and slightly under a day’s vaping.

Filling is simple enough as you’ve seen however it’s a shame you can’t swap out your coils without draining away your e-liquid. As for the protective cap that is a great touch and I have to say the black cap on top of the silver version looks pleasing to the eye.

Overall it’s a decent set-up – nothing fancy or special just a solid no frills performer that does exactly what it says on the tin.

I like the overall simplicity of the Innokin Endura T20 and whilst design wise it won’t stand out from the crowd it’s functional.

I do like the protective top cap and filling is simple as can be.

Not sure why they felt the need to bring out the 1000mAH battery if I’m honest as there’s no real difference in performance only longevity – it is stealthier in the hand though so I’m guessing maybe focused to the smaller handed vapers out there.

The coil swapping whilst simple enough can be a tad fiddly.

Its press fit but you do need your reading glasses on to line up the grooves.

And of course it goes without saying it’s a shame you can’t swap out your coils whilst there’s juice left in the tank.

I haven’t found any major issues with the Innokin Endura T20 kit which is always a good thing.

I would definitely recommend it to newcomers to vaping however regular MTL vapers who like [as I do] to vape from 17watts to 21watts might found it packs a little less of a punch.

The protective cap is a nice feature and not at all ‘gimmicky’ given just like the kit itself it does exactly what it’s supposed to do with the minimum of fuss.

Flavour wise the Prism tank is again doing its job and vapour production is reasonable for the power.

The coils are 1.5ohm and operate between 12 to 14 watts which for me as a regular MTL vaper isn’t enough wattage to get that hard throat hit and richer flavour.

But as I’ve said it’s more than enough for those of you coming off the cigarettes and looking for your first e cig.

Yes I recommend it though as an established mouth to lunger I personally would be looking for something with a bit more oomph.