The Myuz Hadar RDA is from a brand I hadn’t heard of prior to it came through the post. And even after a little research, it’s hard to find much information about them other than the Astora Pod Kit they released early this year.

Even the website listed on the box takes you to what looks like an online shop as opposed to a manufacturers website. However it seems this product is actually manufactured by Myvapors. Apparently the Hadar RDA was designed in Switzerland, and manufactured in China. But right from the start – you can see exactly where the design idea has come from.


WorldWide Shipping Save 10% With Code ECC If you haven’t heard of the Profile RDA by Wotofo, then this might possibly be the most interesting Build Deck you’ve ever seen.

But more than likely you’re aware, or even own a Profile. So the Hadar will instantly make you question the purpose of this RDA and how it could possibly overcome the fact it’s basically a copy of the Profile, just with minor changes to the airflow and deck. 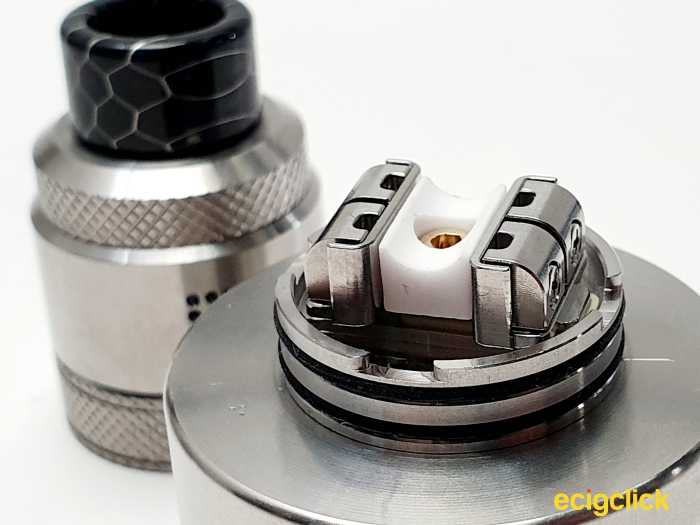 But regardless of that fact, the Hadar features a Smok-Like 810 Drip-Tip, a dual adjustable airflow ring (Similar to the Vandy Vape Widowmaker) and some really nice knurling on the top-cap and base of the RDA.

Quite simply this is a Smok, Wotofo, Vandy Vape Sandwich RDA. The barrel itself splits into a number of pieces, at the top is a 810 Drip-Tip which is styled very similar to some of the Smok Drip-Tips, but it fits in nice and snug thanks to the thick O-Ring inside the Top-Cap which is a Stainless Steel/Ultem combo. The airflow ring is simply adjusted and nicely situated. On either side of the RDA we have the honeycomb airflow which is effectively an airflow ring. Once removed you are left with 2 large slots which are angled slightly to limit leaking if you’re an over-squonker.

But also to direct the air downwards, onto the coils or mesh, before heading up into your mouth. I’ve never been a fan of these style of Airflow ‘Rings’ – purely because it’s just another part of the barrel to worry about, and also gives e-liquid another route to escape. That’s exactly what happens with this RDA.

Because the airflow ring can spin freely, you find that after a few spins, e-liquid can work its way out of the gaps and your fingers turn into a slippery mess. The deck is a Semi-Post-less Clamp Style with a Spring Loaded Cotton Support Base. That is the best way I could describe the Myuz Hadar deck.

Its a direct copy of the Profile RDA but with 2 clamps on either side of the deck – Meaning it’s much easier to install a dual coil build. Apart from the Drip-Tip, everything is a little on the loose side.

I get a little paranoid, especially when using mesh strips, so I’m constantly checking my build to ensure the cotton is fully saturated. But nine times out of ten, removing the top-cap would pull the entire barrel off with it. How Does The Myuz Hadar RDA Perform?

Ideally designed for mesh, but with options for coils. Here’s a basic tutorial on how to build on the Hadar RDA. Some fine trimming of the cotton will be required to allow for good saturation of the cotton, whilst refraining yourself from packing the cotton into the deck as tight as you can. Before fitting the barrel, my tip would be to put the Hadar on a mod and fire the build at around 40w. Keep an eye out for red spots which may appear if your cotton is not completely covering the mesh.

Should a red spot appear, adjust your cotton as the red spots will give you dry hit. And they’re not nice.

If you are well versed with the wicking style for the Profile RDA, you’ll find the Myuz Hadar RDA should be treated exactly the same way.

Thick tight cotton below the mesh, but loose and combed out on either side. This was you ensure excellent capillary action especially when using the Hadar on a squonk mod.

Along with using the supplied mesh strips, i also gave the OFRF Mesh Strips a try to see how they compared to the included Mesh.

I gave the supplied coils a try to see how the performance of the Hadar compares in Dual Coil Mode as opposed to using the supplied Mesh Strips. Using exactly the same method when building, only ensuring you cut your coils down to a maximum of 5mm, using a coily tool this is very easy.

I wasn’t very impressed with the quality of the coils, they’re a very soft metal and due to the deck style, the legs of each coil have to twist to clamp perfectly in the deck. If your coils are too high, the airflow won’t be directed at the coils. Too low and the airflow is practically bypassing the coils altogether.

Wicking in the dual coil setup is simple enough, however it’s a little bit awkward at the same time. This is because the cotton doesn’t drop down on either side of the coil and instead has to be tucked into a unnatural position into the only 2 wells on the RDA, which are shallow and quite small. If you’re planning on squonking with a Dual-Coil build, I would seriously reconsider your RDA choice as with a dual coil build, this by no means will saturate the cotton in the most effective way. 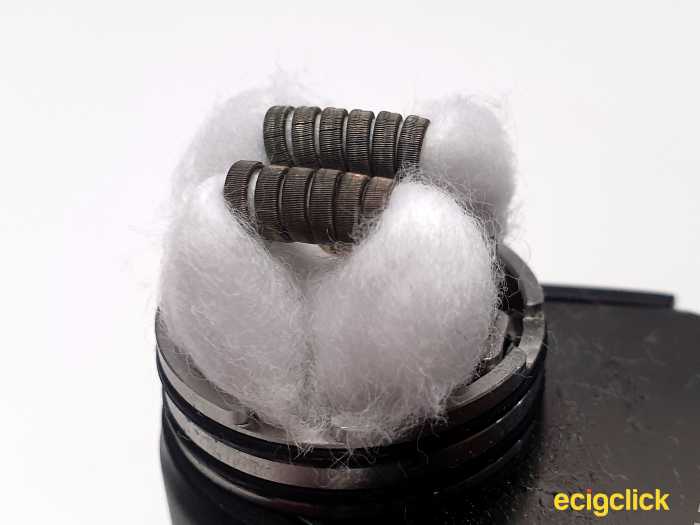 When squonking with a Mesh Build Installed, the Hadar squonks beautifully, the e-liquid is forced firstly into the centre of the cotton, right where you want it, with any excess flowing either side of the mesh strip, and over the top.

Thanks to the downwards angled airflow, I’ve experienced no leaking when over squonking.

In fact, even if you squonk so much the e-liquid is almost at the top of the RDA, it still doesn’t leak out of the airflow! Extremely impressive. During my testing, I’ve been Vaping on Chemical Clown e juice – BamBam which is a Lemon & Lime mix. I’ve tried the RDA with both Mesh, and Dual Coil builds.

Coming out at 0.15Ω, at the recommended max 55w – I was a little unimpressed with the flavour of the included Mesh. I almost feel the mesh strips don’t cover enough surface area due to the large punched out holes to produce better flavour.

I feel that if the mesh strips were similar to OFRF strips, it may improve. However following OFRF’s style, may take the resistance of the strips below the 0.10Ω mark – which I feel they may be trying to avoid?

Fortunately the OFRF strips are also 16mm in length, however their width is just over 4mm less. Meaning they wont cover as much of the cotton, but perhaps the smaller holes in the mesh will improve the flavour?

Coming out at 0.15Ω also, at 70w, I experienced a marginal improvement in flavour, however due to the smaller width, on the large deck clamps, I found the OFRF are more susceptible to dry hits and burning.

It’s a shame because the flavour is a little better and the OFRF strips are more likely to be stocked in your local vape store.

Coming out at 0.22Ω, the dual coil was also a little unimpressive. I put it down to the angle of the airflow which doesn’t directly hit the coils in Dual Coil Mode. Add to the fact this deck really isn’t designed for coils.

The airflow is slightly restrictive even when fully open, but you still get decent vapour production from this RDA.

The Myuz Hadar RDA is primarily designed to be used with the supplied Mesh Strips, it’s just a shame the Hadar Mesh Strips don’t perform as well as I would hope and expect.

It’s not a bad RDA, its just by no means better, or as good as the Wotofo Profile RDA, and lets be fair – That’s exactly what the Hadar is replicating.

If anything its alot worse. The deck is very well built and is easy enough to build on in Mesh Mode. But the tolerances of the O-Rings aren’t right, the flavour isn’t great, and with a traditional Coil build installed, it’s just not very good or enjoyable. Both to build on, and to vape.

To add insult to injury, you’re left with permanently slippery fingers thanks to the airflow ring which freely spins and allows juice to escape. Its clear to see some designs are best left alone.

Have you used the Myuz Hadar RDA? We would love to hear your thoughts in the comments below!


WorldWide Shipping Save 10% With Code ECC