The Smok Novo X Pod kit review and I’m starting to get buried beneath a pile of pods and more importantly pod compatibility lol!

It can be very daunting for the newbie vaper in a day and age where pod starter kits are appearing on almost a weekly basis. 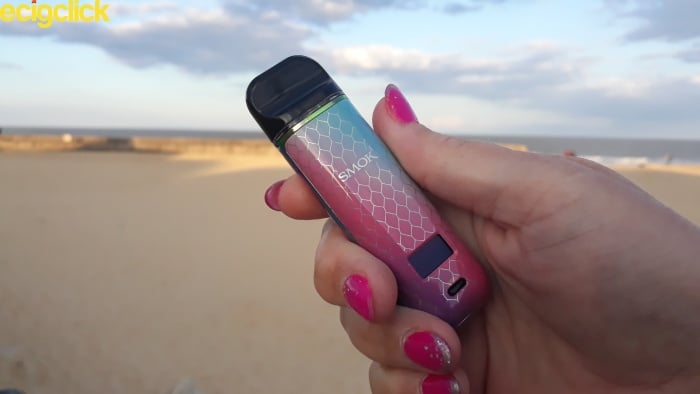 I guess we can put it down to ease of use, it’s a very popular sub category that’s for sure and if it achieves the end goal then? I’m all for that.

What we have with the Smok Novo kit is the obligatory upgrade.

We’ve had the OG Smok Novo kit and that was followed by the Smok Novo 2 kit. During the transition the basic form factor has remained the same and the differences to size and dimension are negligible.

In case you were interested, Novo is Latin for new, fresh, revive, change or to alter and invent. If that doesn’t describe Smok then I don’t know what does lol!

What Can We Expect From The Smok Novo X Pod Kit?

We can expect pretty much the same as the previous renditions in the series. In keeping with the Novo name there have, of course been changes.

For the first time a monochrome screen display has been included and the micro USB port has been relegated to the underside of the battery section.

The user is now able to alter the power fed to the included disposable pods and their included kanthal or mesh coils.

Most significantly of all we can expect a far better battery performance as the Smok Novo X Pod Kit now has double the capacity at 800W – vape for days, guys!

This one had me worried! The front of the box displays the image for the Novo 2 kit but the logo has been replaced with a sticker for the Novo X kit… Upon inspection the contents were indeed those of the Novo X Kit – Phew! 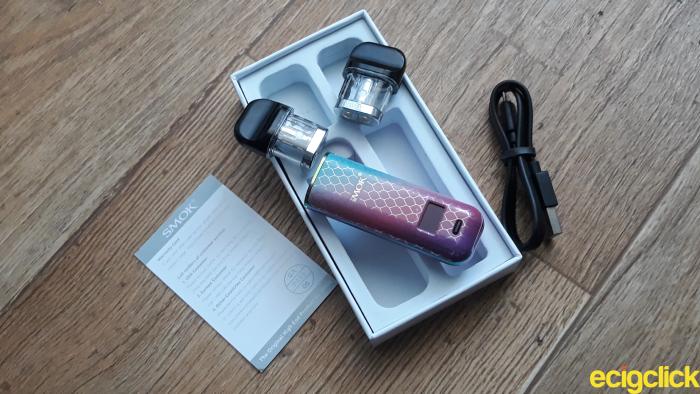 Unfortunately, there was no instruction manual to be found with the review model.

The Smok Novo X Pod kit is available in standard, US and TPD versions.

Aside from the TPD packaging containing the “This product contains nicotine” drivel, there appears to be no differences and all contain 2ml disposable pods.

Safety features have also been incorporated into the device, with protection against: short circuiting, low voltage, atomizer recognition, lithium-ion protection and an eight second cut off when vaping.

For the purpose of review I received the seven colour cobra scheme, another way of avoiding the use of the “rainbow” word.

There certainly doesn’t seem to be seven colours running through it although it still remains quite striking and visually pleasing on the eye.

The main body is comprised of zinc alloy. It’s pretty weightless when holding and there’s probably little chance of dropping it although it does have something of a greasy texture. Possibly preventing a few scratches here and there.

The CNC cutting and plating around the sides and bottom are quite classy and no doubt contribute to overall strength and resistance to damage. As mentioned earlier the micro USB port has now been placed on the bottom of the battery so the only way to charge it is in a horizontal position. Because of the curved beveling and lack of weight it’s probably just as well.

Within the battery section the the positive and negative terminals are visible. An air ingress port also lines up with the pod when attached. 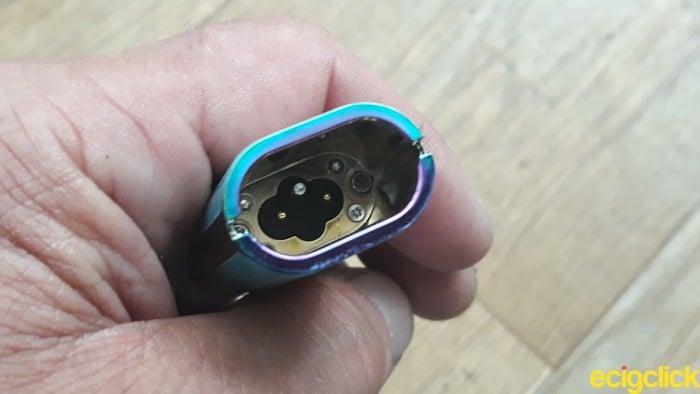 Speaking of airflow, it’s achieved by the two small cut outs located at the top of the battery section. Airflow travels down the sides of the pod and passes up through the ingress tube hitting the coils full on. This is the Smok two way U shaped airflow channel system.

The information available includes current power output (wattage), battery indicator and percentage, resistance of the coil and a voltage reading.

To operate the device:

The Smok Novo X Pod Kit will go into hibernation mode after 15 seconds of inactivity.

The toughened plastic is extended to the material used for the pod itself. Although there’s no tinting the benefits are only obvious when removing from the battery section. These are refillable, disposable pods and the ones included contain dual kanthal coils with organic cotton.

It’s a little odd that Smok are also promoting the Novo X mesh 0.8ohm pod but have chosen to omit it from this kit.

Surely it would have been better to include one of each? There’s your obligatory Negative Neil lol! 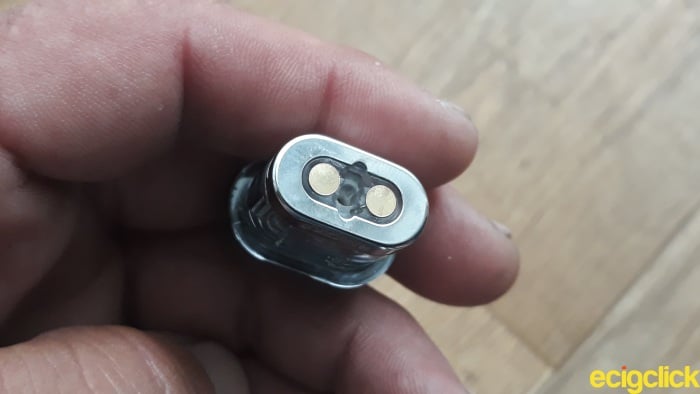 On the underside of the pod are two gold plated battery contacts. There are no magnets involved with the Smok Novo X kit and the pods simply snap into position.

This does mean you have to wriggle the pod with some force in order to remove it. Not the best substitute for a magnetized connection.

At least the pod is reversible so it’s pretty much dummy proof. Even for me!

The silicone stopper is side mounted but still presents me with the usual issues.

I just can’t prise the majority of these stoppers out of the pods. There doesn’t seem to be enough space to get anything other than the most manicured of finger nails into.

I’m a nervous biter, so that’s gonna rule me out I guess.

However, it does look strong and durable enough to stand the test of its relatively short lifespan.

How to Fill the SMOK Novo X Pod Leave the E liquid to soak into the cotton for around five minutes before vaping.

How Does The Smok Novo X Perform?

I’m going to try the coils with two different liquid ratios to see how they hold up.

At the lowest setting the liquid produces pretty good cloud production but there’s only the merest hint of menthol.

The cherry becomes more prominent adding flavour while the menthol is stronger when vaped at 18W.

I found the best results when pushing up to the maximum recommended setting of 25W.

I still failed to get the very best out of the cherry but the menthol hung around for quite some time. This is where I got the most satisfying vape, with the slightest hint of a throat kick.

I had to make good use of my aging lung capacity with this device, having to give a really good pull on the pod. That’s indicative of far too much airflow for a decent mouth to lung vape.

The Smok Novo X Pod kits auto draw is very sensitive but will de activate under insufficient pull strength, and it has a tendency to stop and start when inhaling lightly.

Oddly enough and as if to confirm my suspicions, blocking one of the side air ingress ports of the battery provided a much more appealing vape and the sweetness of the cherry was able to escape. There was much more of a fusion between fruit and menthol.

The auto draw was also now working to maximum efficiency, proof there’s just too much air being drawn into the pod.

Not an uncommon issue with pod based systems but it does still remains commonly annoying.

With the second pod I used Exceptional Vapes Rice Pudding and Custard to see how the coil responded to a thicker juice ratio as well as the flavour reproduction from a dessert inspired vape.

Diving straight in at the maximum power setting and something of a shock!

The flavour quality was fantastic and the DC pod was able to bring out most of the dairy tones. The vape was warm enough to emulate dollops of cream and rice pudding.

It’s quite clear the coil can handle a 70VG/30PG ratio but after a day or so I ditched the airy mouth to lung vape in favour of a restrictive direct lung hit, since the MTL style felt uncomfortable in use.

I used both coils during the review, one with a thin ratio and one with a standard liquid density.

Both were more than capable of bringing out the flavour notes but it seems the Novo X 0.8ohm DC slightly favoured the dessert profiles. I got used to vaping the Smok Novo X pod kit not by the MTL option but with a very restrictive direct lung style. Of course the trade off is that it’s not really ideal to vape 10-20mg nicotine salts this way if you value your throat!

So therein lies the problem and it comes down to the usual suspect, just too much airflow. We have to take into account the coil is being marketed as MTL too.

The device itself is solidly built and with such little weight you’ll hardly remember you placed it in a shirt pocket. It’s an incredibly portable little fella and a single charge allowed me twelve hours continuous use – and that was at the maximum 25W output.

The coil itself is likely to last anything up to two weeks especially if using 50VG/50PG juice ratios.

Surprisingly enough there is no backwards compatibility with other pods in the Novo series.

Charging took around 90 minutes via the micro USB port and pass through is an option if you’re desperate for a quick vape.

Who Would I Recommend The Smok Novo X Kit To?

Without a doubt, it’s designed with the new vaper in mind. It’s not really much heavier than a cigarette, discreet and very pocket friendly, all very important factors.

It won’t take long to work out the simple menu functions and auto draw is a big pulling factor.

The coils will provide more than enough flavour and cloud production to keep a newbie satisfied.

Unfortunately the Smok Novo X Kit falls short when it comes to replicating the experience of smoking a cigarette, that classic mouth to lung requirement. The airflow structure has not been set up to compensate a smoker wishing to quit.

That, ultimately is what will dictate the device’s level of appeal.