For pipe lovers SMOK Technology Co. Ltd brings you the Prospect. Essentially a pipe shaped mechanical mod. Based in Shenzhen, China SMOK’s vision is to ensure that e-cigarette users can enjoy a traditional style experience without any of the dangers. For what is actually quite a large box it is what you would call very bare bones. In some respects I think SMOK should offer this as a complete package including battery, tank, drip tip and possibly a couple of spare tank coils. A user manual wouldn’t go amiss either since this is a mechanical mod where there are significant safety precautions to be mindful of.

Of course it is also understandable to package the item this way since it allows users flexibility to choose their own tanks to use with this.

The pipe itself is solid and suitably weighty. Everything has a lovely almost mirror polished look to it. Its not that much of a fingerprint magnet either which I suspected it actually would be.

I think for someone who was previously a pipe user before switching to vaping then they would certainly be impressed with it, although the styling itself is more modern rather than traditional.

The base of the pipe itself is easily unscrewed which allows access to the battery compartment. The four venting holes in the base are suitably large. Firstly I should mention that I don’t recommend that you use nipple top batteries since it is rather a tight fit, so make sure to use flat top batteries only. The switch itself has a good feel to it and works correctly. Sometimes though it doesn’t look completely level to me and I would say the fit is ever so slightly wobbly. However I don’t think its ever going to come loose on you.

My only real issue with the machining which on the whole is good is regarding the locking ring. The ring has to be rotated anti clockwise to release the switch and rotated clockwise to tighten it back up again. The problem is that some times when locking, the ring seems to stick to the switch and it can take some real force to loosen it again.

I think applying some WD40 should solve the issue, personally I just make sure not to over tighten now that I am aware of it but nitpicking aside I don’t think this part of the mod is as good as it should have been. Be mindful this is a mechanical mod:

As stated this is a mechanical mod that has absolutely no protection at all. Be sure to read up regarding general safety practices and consult the guide on the site.

Due to the fact that you are only receiving the pipe itself when you purchase this you are going to need other items. So don’t assume you are getting a complete mod here. You will need batteries, good quality 18350 flat top ones. You will also need a battery charger and additionally a tank of some description as well.

When I received this item for review I had absolutely nothing suitable I could use with it. I have long since evolved in my vaping habits and I only tend to use 18650 batteries, RTA’s, RDA’s and Sub Ohm tanks.

This required me to obtain items to use with it, namely the 18350 battery as well as a SMOK Trophy tank (similar to a Kanger Protank) with a couple of extra coils. I contacted Smok regarding extension tubes for the Prospect since I also wanted to see if the mod could be used in 18650 mode.

None are actually available for the Prospect at this time but I enquired as to whether the SMOK E-Pipe extensions would work. They were very friendly but said since items were located in the warehouse it was not possible to check.

Thankfully I found my answer online and yes they do fit and work. At 99p per extension from SmokShop (one for 18500 batteries, two for 18650 batteries) the device can be run in modes other than 18350. However it does make the mod much heavier and oversized, its certainly not as comfortable and the extensions don’t match up well with the finish of the Prospect itself. Personally I would suggest people stick to the 18350 mode but I thought it best to consider all the various options.

So How Does The SMOK Prospect Pipe Vape?

This is actually kind of hard for me to answer due to the way I like to vape now. In comparison to my typical devices the Prospect seems rather lackluster. That’s not to say its bad, its just very limited. The vape I would say is slightly better than a Ego style variable voltage battery. 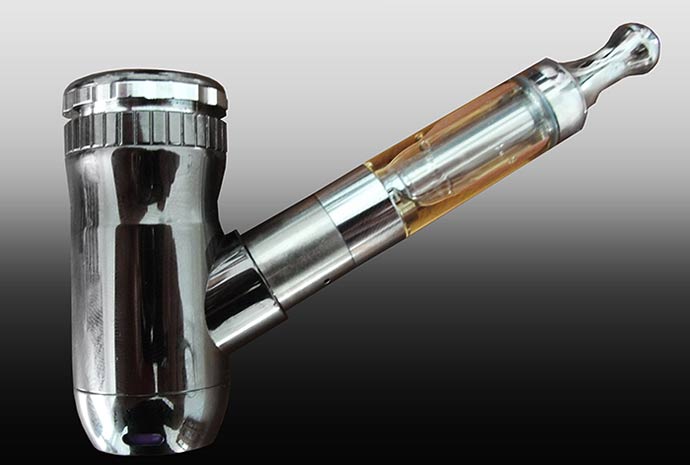 You have to bear in mind that the coils that came with the Trophy Tank were 1.8 ohm so a battery at its peak is going to offer 4.2 volts which means wattage is going to be 9.8 watts, now that’s going to seem very weak to many people. As the battery charge drops off down to 3.7 volts wattage with a 1.8 ohm coil will be 7.6 watts.

Ideally I think you really want to be using a tank that has around 1.0 ohm coils. At full charge you will then get about 17 watts which is easily comparable to the the old Vamo V5’s which only offered 20 watts maximum.

Mind you there are also other options since you could happily attach a Nautilus tank to this device and probably get a fairly decent vape.

Looking at this mod from the point of view of someone who would enjoy a pipe type experience then when it is fully set up the device really does feel like a pipe. I found even with the limited vapour it was fun, comfortable, quite enjoyable and the device actually looks far more stylish than some of the larger box mods I typically take on my travels.

For the real kind of traditional experience I used my DIY Vanilla Tobacco e-liquid in the Trophy Tank and I found the flavour good enough. I personally would have liked more heat and vapour but that is the limitation of the coils I had on hand.

If you are a pipe fan or a mechanical mod fan then yes this is a decent enough device. Just be prepared for the fact you will need quite a few extras if you don’t have them already.

More for pipe fans than anyone else, a stylish device with very few flaws but in many ways a device more for show or for vaper’s that don’t want massive amounts of clouds or high wattage. A vaper who is currently a Vape Pen user would certainly enjoy this.