Relax Folks It’s a Spoof – NOT a Big Pharma Conspiracy!!!

Despite receiving ‘death threats’ the creator of that My First Vape meme is unrepentant and says it was meant as a ‘humorous take on a social phenomenon.’

Having seen some of the reactions I have to say the vape community sometimes needs to chill out a little and take this kind of thing as it’s meant to be ‘a joke!’ 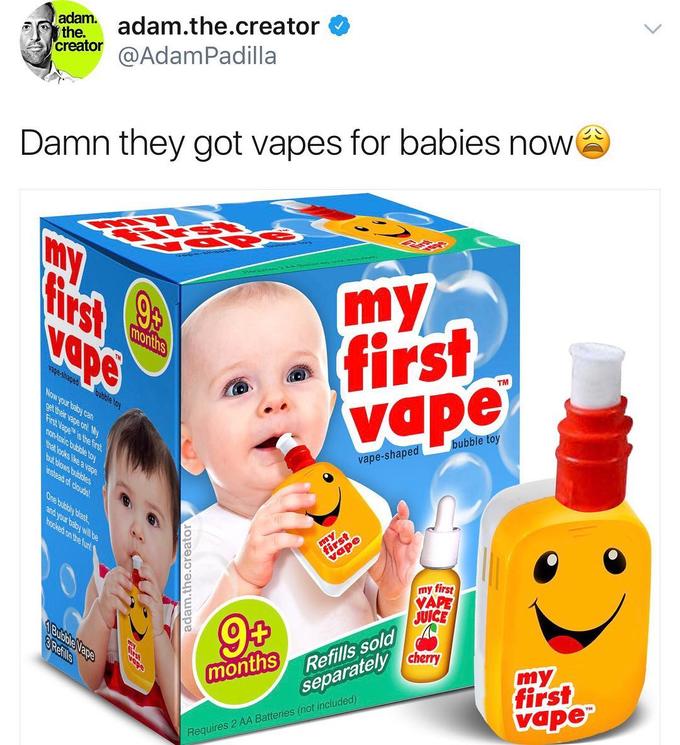 This isn’t the first time I’ve reported on death threats around vaping and vapers – remember my interview with Vic Mullin for instance.

If anything gives vaping and in particular some vapers a bad name it’s that sort of behavior in my humble opinion.

The meme was created by Adam Padilla head of BrandFire a US based branding agency. 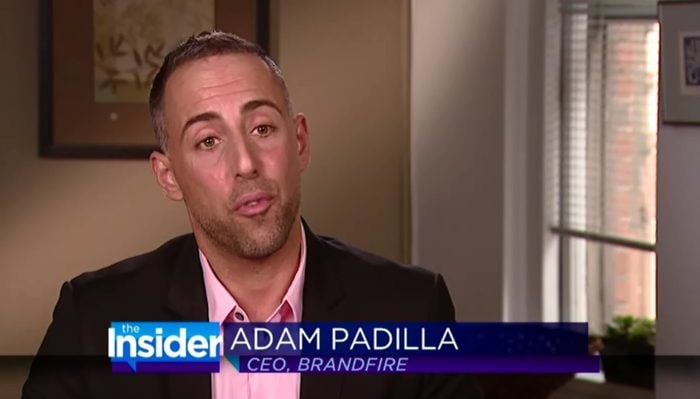 He’s a writer – artist and expert in Photoshop and has gathered a huge following on Instagram and yes he is a vaper and wholeheartedly supports the movement which he says ‘saves lives’.

It’s been suggested the vaping meme was meant to discredit the vape industry – particularly as Pfizer the manufacturers of Champix stop smoking medication has been one of his clients in the past.

He’s produces thousands of memes and the one prior to this – the The Happy Hour Playset – which depicted toddlers in bar – drew condemnation from across the mainstream media.

Personally I think people need to stop getting offended by everything they see and maybe ‘grow a pair’- but I was brought up in the pre-internet generation.

So just for the record and just like a review these thoughts and opinions are mine and mine alone and DO NOT necessarily reflect those of anyone else on this website.

I managed to track Adam down and he graciously agreed to an interview:

It seems to have upset the vaping community somewhat to say the least!

My name is Adam Padilla an I’m a memer. My original Instagram account @adam.the.creator features original daily humor that I create myself. Some of my content gets reposted by celebrities like Snoop Dogg and The Rock, and some (like my Starbucks Trappucchino, Trump SpongeBob and Fisher-Price Happy Hour Playset memes) have gone viral.

One of my recent memes depicts a baby toy called “My First Vape” featuring a simple molded plastic mod with smiley face that comes with cherry-flavored bubble juice.

Somehow the meme has caused a lot of passionate responses in the vape community, particularly on Facebook where some people thought that I was trying to shut down the vape industry by illustrating how vape marketers appeal to children.

Some people even checked out my company website, saw Pfizer among my list of past clients and assumed that they had paid me to create the meme to undermine the industry. Here’s the real story.

I’m no activist and I certainly don’t have an anti-vape agenda. I’m a designer and writer by trade, and built my account from scratch over 4 years by posting 730 consecutive daily original drawings.

I then transitioned to creating humorous original memes about two years ago. It is purely a creative outlet and a way for me to connect with other like-minded original meme accounts, many of which have become close friends. We are like a circle of comedy writers that are able to create original content and connect with our followers on a daily basis.

Could I ask firstly if this is indeed your work?

Yes the myfirstvape was my 1,501st consecutive original daily post creation on my Instagram account – @adam.the.creator. I’m a designer and writer by trade, and started the account by drawing 730 consecutive daily drawings, which began my following- then transitioned to using my artistic skills in tandem with my 20 years professional Photoshop ability and creative writing background to create humorous original memes about two years ago.

Since then many have gone viral, but as of now it is a passion project and creative outlet as well as a way for me to connect with other like-minded original meme accounts, many of which have become close friends. We are like a circle of comedy writers and it’s a beautiful thing to be able to create on a daily basis and to connect with so many people.

Secondly what was the thinking behind it?

The thinking behind all of my work is: what would be a humorous take on a social phenomenon or relatable experience that will make my followers laugh and share today? I have two young children, and it always amuses me to think about babies doing adult things. That was the genesis of my Happy Hour Playset idea.

That wasn’t an attempt to make any kind of political statement and didn’t draw the ire of outraged ATF agencies about the liquor industry. It was intended to make parents laugh. It’s kind of like the SNL skits with Thong Pampers or baby SPANX. That stuff is funny.

And thirdly and given Pfizer is one of your clients was this intended to put vaping in yet more of a bad light?

My branding agency is called BrandFire and that’s my day job. I have many past clients, most of which are small businesses, some of them people may have heard of, like Pretzel Crisps and Health Warrior, many are smaller.

On some occasions, we get the opportunity to work with larger corporations on an initiative or two. Inevitably those relationships end, but including those logos on a client list are important to agency’s credibility in securing new business.

In this case, Pfizer’s logo on our client list doesn’t mean that they currently engage us for anything, just that we had worked on something on some level at some point…and most rational adults in the business world understand that.

People need to ask themselves: is a viral image of an absurd baby toy modeled after a vape something that a major pharma corporation would actually sanction? Trust me, big pharma isn’t that edgy! Taco Bell or Wendy’s maybe…but Pfizer?? Come on, people.

Just look at the context of my thousand or so memes and ask yourselves…is this the forum of a political activist or does it look more like a meme account that takes pop culture and lampoons it for the purpose of entertainment? I leave it to educated readers to decide.

Please add anything else you see fit 🙂

It’s scary how good people devolve into violence and threats in these FB comments. “Die you piece of shit!” “You are an idiot for making this, asshole” etc. Really?? This is 2017 and we are all adults? None of these activists considered splicing the myfirstvape side-by-side with an image of adults vaping, and adding the caption “what the government thinks the vape industry is vs what we actually are”. Now that’s meme culture- taking a (perceived) threat and using its popularity to express your point of view creatively.

And for the record, I vape occasionally and hope the industry thrives in the face of people trying to shut them down. It saves lives, and it’s a better alternative to cigarettes and other tobacco. I think the mods and custom coils are pretty fucking cool…and half of my closest friends are big cloud chasers! They do it in my office constantly. Literally sitting at my desk. Some regular juice, some other stuff lol.

Look at my man Blake Webber aka Blakevapes on Insta- very funny guy. He reposted it with great response. He gets it. So did TPain and WorldStar, who both reposted it. You think they hate vaping? Of course not. They see that it’s funny and it’s a tribute…and I think most people did, too.

I make my living helping companies brand themselves and create campaigns and commercials with my partners Bryan Black @black_humorist and Casey Hochberg @thedailylit.

We moonlight as memers, but the worlds don’t collide. Memes are not a source of income for me. I don’t even run small ads, least of all receive sponsorships from big corporations! Maybe that will change one day, but for now- my only agenda with my Insta account is making people laugh. I’m a humor page like Mad magazine or National Lampoon or Howard Stern. I’m no activist. If you don’t like it, don’t follow me…but don’t threaten me, either.

If you truly don’t get my humor and feel so passionate about it, then create a counter-image with your own perspective to ride the viral wave and join the conversation. That’s the country we want to live in, isn’t it? Above-board dialog using humor and intelligence to communicate different points of view? Spin the damn thing and add your message.

That’s what meme culture is. I would probably share your image too! I always communicate with followers. The world is too cold…social media should be about connecting and sharing stuff and making other people laugh and feel good and empowered. I got nothing but love for you guys, man. Blow them damn clouds all day! Make it rain!

As I’ve already said I saw the meme – knew it was a meme – smiled – chuckled and moved on.

If the vaping ‘snowflakes’ out there really think this is going to ‘damage’ the vaping industry then they might need to get their sense of humour chakras re-aligned.

And for those of you about to jump up and down wondering why the hell I even bothered to report this – here’s why.

I write about vaping and NOT just the fluffy pretty things either.

If there’s something in the vape community that is either pissing it off or making it happy then I should be obliged to write about it.

Remember I’m a former old school newspaper reporter – not one of these new style ‘repeaters‘.

My old editor used to say ‘publish and be damned‘ – words to live by IMHO.

I’d like to thank Adam for taking the time out from his busy schedule to chat with me.