Around a year ago, Uwell released the Caliburn G pod kit. It went down an absolute storm when reviewed by our very own Mr Neil Humber. He liked it. A lot.

Today it’s the turn of the upgrade and the predictably named Uwell Caliburn G2 pod kit.

For over five years Uwell have firmly established themselves as creators of the highly reputed Crown series of sub ohm tanks – we’re currently up to the Uwell Crown V.

At the same time, the Nunchaku and Valyrian range of vaping kits were flying off shelves up and down the land. 2018 onwards was the era of the pod kit. Uwell were hardly shy in jumping aboard that particular vaping vessel. Not long after, the very first Caliburn pod kit arrived.

Despite its unassuming appearance our Michelle instantly fell in love with it, proving that looks aren’t everything.

..There’s still hope for me, then!

Oh! By the way.. The word Caliburn derives from Latin. Caliburnus and relates to King Arthur’s legendary sword, Excalibur.

Wonder what ‘ole Arthur would’ve made of vaping..

Uwell Caliburn G2 Pod Kit – What Can We Expect?

Unsurprisingly the Caliburn G2 takes on the same form factor of its predecessor. The weight and pocket friendly attributes remain (they’re both 36g) and even the fire buttons, branding and single LED are in the same place.

Heck! Even one of the UN2 mesh coils has been ported across. As far as functionality goes, expect more of the same with a choice of manual or auto draw features. The maximum output capacity of 18W is also retained.

It’s all beginning to sound very samey isn’t it? Don’t worry, it’s not..

Expect to find a few differences.

One of the things I love about Uwell is their attention to detail. I particularly appreciate the demo card explaining a few basics – ideal for the new vaper. It now features vibration interaction or haptic feedback. Different patterns alert for issues such as low voltage, short circuiting and over vaping.

Although the Caliburn G incorporated a fixed airflow intake for a more restrictive direct lung vape, the G2 utilises a free spinning wheel for even finer tuning of airflow.

To accommodate this a wider mouthpiece has been included.

Gone are the two vertical viewing slots on either side of the pod. They’ve been replaced with two larger ones on the front and rear of the pod.

The coils are backwards compatible with those of the Caliburn G and a new 1.2ohm coil comes pre installed inside the pod.

In terms of form factor there’s little to separate it from the previous version. They both weigh the same making them extremely pocket friendly. The Caliburn G2 shares the same ease of use too.

It’s those front and back juice viewing windows that initially symbolise the update. 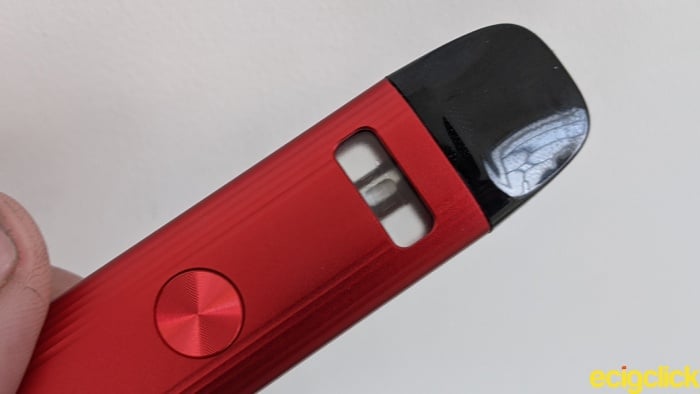 Although it was still possible to see juice levels with the Caliburn G, I definitely prefer viewing them under this new horizontal arrangement. It takes away the need to keep removing the pod.

On that note, again the pod doesn’t rely on magnets to attach to the battery. It uses a press fit system to simply snap into place.

It certainly works a treat because there’s no rocking or side to side play. How attached was it? Well it passed the drop test every time so that was proof enough for me. As mentioned, the mouthpiece has been widened to compliment additional airflow delivered via the “progressive airflow adjustment” wheel.

These enhancements are a clear nod to any restrictive direct lung vaper.

There’s also been something of a change to the shape of the mouthpiece. This makes it much more comfortable while vaping. The adjustable airflow wheel on the sample version is very easy to turn – maybe a little too easy. We’ll see how effective it is with airflow patterns shortly. Recesses within the battery section line up with the airflow created by the adjustable wheel.

The Uwell Caliburn G2 now sports dual fixed airflow slots either side of the battery section. However, closing off airflow to the wheel doesn’t activate a MTL vape as expected.

More on this later.

Press the fire button five times to turn the device on or off. The LED will blink three times.

Hold the fire button to vape. Alternatively use the auto draw feature to activate. While vaping the LED will advise of current battery status.

When the red LED flashes 10 times the battery will shut off. You’ll need to recharge the device via the type C USB charging cable and an appropriate wall plug.

As alluded to earlier, the Caliburn G2 uses vibration to alert of potential battery issues. Combined with the use of the single LED, I’d say Uwell have pretty much got it covered when it comes to safety precautions – nice touch!

The device will vibrate twice when type C USB charging first occurs. During the charge the LED will change from red through blue to green.

Once charging is complete, the device will vibrate once and the LED will remain a solid green. The Uwell Caliburn G2 uses plug and play coils but here’s a word of warning. Don’t just push them up into the pod hoping for the best. Some care and attention is still needed!

Hopefully, the image above will explain things better.

..I tend to ramble on a bit, but put simply? Make sure the flat edge of the coil lines up with the flat edge on the base of the pod then push it all the way in.

The plug and play coil needs to be sitting flush with the underside of the pod. Let the e juice soak into the cotton for around five minutes before taking your first vape.

Uwell Caliburn G2 Pod Kit – How Does It Perform?

(For a closer look at the G UN2 0.8ohm meshed coil please check out Neil’s review of the Caliburn G Pod Kit)

88 Vape Raspberry Ripple was used and it’s a 50VG/50PG liquid ratio containing 6mg of freebase nicotine. Although it’s a generic flavour I know what to expect from it.

The wheel was adjusted to provide maximise airflow.

What were the results?

I was impressed by the initial ramp up and power from the new G2 coil, whether used in auto draw or manual mode. Using the fire button did produce an extra boost in power and useful for when the battery was depleting. The flavour quality was excellent. Raspberry was easily recognised along with its associated sweetness and the creamy elements (although a tad muted) helped to soften some of the bitter nature of the juice profile.

For a coil rated between 9-13W, vapour production was very impressive. Obviously you wont get thick plumes of cloud but it’s still very satisfying, nevertheless.

There’s no turbulence present and any noise created during inhale was kept to a very minimum.

This setting gave me a restrictive direct lung vape although a touch tighter than I usually prefer. MTL vaping is also possible but I personally found it too loose. It did have an effect on flavour performance.

It was still good but lacked some of the intensity when compared to a RDL vape.

The Wheel Thing Or Just A Gimmick

By this I mean it was just far too tight for any kind of direct lung hit. Whenever an inhale starts pulling on the ‘ole neck muscles I generally know. Lol. There was very little degradation to flavour. The sweet notes and the fruit content were still in abundance and the coil delivered consistently with every vape.

In fact this is the setting most new vapers will appreciate the most. More so when using the auto draw feature, producing vapour content on par with that of cigarette smoke.

However, and I really have no answer to this but starving the adjustable wheel of airflow renders the pod kit unusable. I was expecting the dual fixed airflow slots on the battery to kick in and produce the ultimate MTL vape. So this simply means all airflow is governed by the adjustable wheel.

The 750mAh battery held out a solid 12 hours under standard to average vaping patterns. I found that quite impressive and so was the recharging time.

Just over half an hour!

I vaped around 5ml of e juice during this period of time and can’t say I noticed much degradation in performance as power decreased. That’s something I was particularly impressed with.

I would suggest sticking with 50VG/50PG juice ratios while using this coil. Nic salt strengths between 10 – 20mg will be ideal for the new vaper.

The new progressive airflow adjustment system works to a degree but it’s not perfect. It is possible to have a restrictive direct lung vape or a decent MTL one.

In all honesty, I wasn’t expecting too much from this tiny wheel.

When it’s is fully exposed to airflow there’s a tendency for the odd leak too. It’s nothing major but I’m a stickler when it comes to testing this area.

The Caliburn G Pod kit was totally leak free so that’s a bit of a step back I’m afraid.

The shape of the mouthpiece is an improvement and it felt natural and comfortable while vaping. As with its predecessor removing it for the purposes of filling can be a little awkward.

I just hope it holds up against potential cracks to the plastic. Having tested both pod kits in the Caliburn G range I would have to say auto draw is more sensitive on the upgrade. It never failed, even with the most timid of inhales.

I’m not sure why Uwell didn’t stick with a semi raised fire button for those preferring a manual draw. It’s such a useful addition when dealing with low light conditions or when focussing attention elsewhere.

Overall, The Uwell Caliburn G2 Pod Kit is a really solid little performer. Flavour and cloud production is awesome given the power limitations and the new G2 mesh coil is the star of the show.

Into its second week of use the new G2 coil is still delivering great flavour and showing no signs of tiring. It wouldn’t be a stretch to suggest around three weeks worth of use before replacing.

Uwell have struck the perfect balance between battery capacity and coil resistances. This makes it a very reliable vaping device. Yeah.. I am impressed.

If you’re looking for a consistently tasty vape with modest vapour production from a pod kit the Uwell Caliburn G2 should be on the hit list.

Have you used the Caliburn G2? Let us know your thoughts in the comments below.