Caliburn A = Original Caliburn, Caliburn Koko, Caliburn A2 and Caliburn AK2. These have fixed coil pods which you discard when the coil performance deteriorates.

What Can We Expect From the Uwell Caliburn AK2?

You will notice a lot of this review is similar to the Caliburn A2 – I can’t really avoid it as the specs and pods are the same!

Also this kit has not been officially released on the Uwell website or social media so there are no marketing images to share with you sadly.

As mentioned above this is the update to the KoKo range and this model ties in with the new Caliburn A2 and uses exactly the same 0.9ohm Meshed pod.

A liquid check window has been provided and the output increased to 15W.

Unfortunately the battery capacity is the same as the original Caliburn and KoKo at 520mAh – but there is USB Type C fast charging.

The pod is 2ml capacity and has a top fill port accessed by removing the mouthpiece. The original Caliburn pods are not compatible.

So far I have only seen this in 3 colours: Neon Orange, Turquoise Blue and Classic Black.

As usual I will report back honestly on the findings of the pod vape in my possession. I received 4 of the Caliburn AK2 pod kits in Turquoise Blue, Classic Black and Neon Orange. As usual with Uwell the packaging is superb and the included instructions are good.

This really fits the Koko design brief and is very similar to the original Koko.

I have only just realised what the name stands for – “Keep On Keeping On” – which only came to me as it is etched into the actual body of the device!

It is super cute – especially my favourite one in the Turquoise Blue colour!

The body feels like an aluminium alloy construction in a metallic finish with the top side and base feeling like a hard black plastic.

The front of the mod has the e-liquid viewing window – which like the Cali A2 is too dark as there is no window on the rear of the mod.

If this was a straight through window the liquid viewing would be perfect but as it is not – it is too dark to judge the level.

My photos were taken under a very bright light – don’t expect to see much of the liquid level in normal daylight.

Etched into the right of the front panel is the text “Keep On Keeping On” and then a weird set of numbers which look like some kind of map reference “113.843°N22.601°E”.

Below that is again etched “Caliburn” and some diagonal stripes.

The metallic side of the mod has the incoming airflow hole and the slot shaped LED indicator.

Note mine has the text “Sample not for sale” as it is a review version.

The top right corner of the mod has a chamfer and the hook for the lanyard lives here.

I really like the lanyard it is a silicone material with the effect of being a cord.

On the base is the USB Type C port, legal logos and 3 venting holes. The other side of the mod is the black plastic side with “Caliburn” engraved into it. The pod sits in there well, sometimes there is some slight side to side movement and also if you don’t replace the mouthpiece fully this can sit proud of the mod.

On the rear of the mod is the “Ko Ko.” branding.

This is exactly the same as I used in the Caliburn A2 and it is a huge improvement on the original Caliburn pod.

I struggled to remove the mouthpiece on the original Cali but this time a simple push from side to side will remove it. You do need to make sure the mouthpiece clicks fully back in position as if it doesn’t it can cause a leak. Also the pod does not sit properly in the mod if this happens.

The fill port has a red check valve and also is a great size for my 10ml and 50ml e-liquid bottles.

My bottles seem to have a wider spout than some which has been difficult in some kits (ahem Smok N18) but I had no issues with the fill port here. 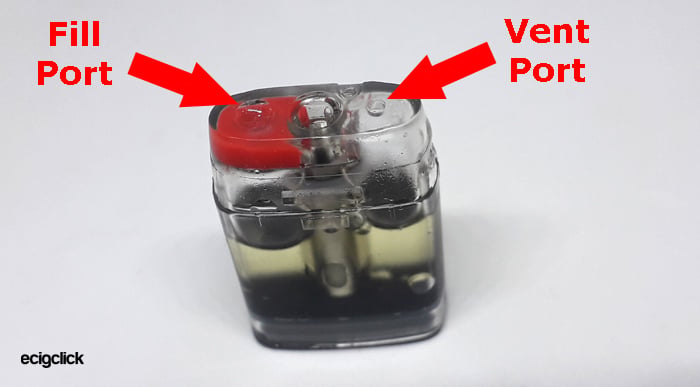 Unfortunately the filling process is not always mess free, I often end up with e-liquid sitting on the top of the pod which you need to wipe off before replacing the mouthpiece to prevent a big glug of e-liquid in your mouth.

This was more of an issue with my 10ml bottles but the 50ml bottle spout pushed fully into the check valve and there was no over spill.

The pod is installed in the mod in the packaging but there is a protective sticker on the base of the pod to prevent firing.

If you fire the pod without e-liquid it will damage the coil and the pod will be scrap.

Make sure to fill the pod, allow to stand and remove the protective sticker before use.

This kit uses a USB Type C cable for charging – sadly one is not included in the kit so you will have to source your own!

The charging time on this so far seems slightly quicker than with the Caliburn A2 at 45 minutes – even on an old 0.5A port on my PC!

Make sure to refill the pod when the e-liquid level is at the “Min” mark to avoid damaging the pod.

How Does the Uwell Caliburn AK2 Perform?

I know this sounds super lazy but I will refer you to the review of the Caliburn A2 for the pod performance.

This uses exactly the same pods – and I am even continuing using the pod I used in the A2 kit – to get a good idea of coil life.

So far I have had 33 refills (around 66ml) from the same pod and the flavour is still perfect!

The flavour and throat hit are even better than the original Caliburn which was pretty ace already!

Not the tightest MTL airflow I have experienced but still quite restricted and to me absolutely spot on.

The mod performed perfectly, the auto draw firing is super quick and I had no faults whatsoever.

As you will see below the main problem for me is the low battery capacity however the mod charges quickly and I have had no USB port issues either.

This is always variable due to your own vaping habits but as a guide I got around 4-5 hours of vaping.

It is such as shame the battery capacity was not increased as this limits my use of the kit out and about sadly.

There are of course a few gripes about this kit – sadly nothing is ever perfect.

They are so similar to the Caliburn A2 as well – no USB cable included, low battery capacity, the viewing window is not a lot of use and the lack of fire button are things I would improve.

But I actually prefer the experience of using this kit to the A2 – having the lanyard means I can wear this around my neck so it is always at hand.

I am a girl so I rarely have any decent sized pockets and vape kits get lost in my stupid filled to the brim handbag!

The flavour, vapour and throat hit are better than the original Caliburn and that was good! Add to this the super quick draw fire and absolute cuteness of this kit and I really can see me and the AK2 staying together for a long time!

Please Uwell increase the battery capacity – there are lots of similar devices with a 1000mAh battery and this would be such an amazing upgrade.

Having only 5 hours of vaping means I don’t always take this kit out with me and pick up my Innokin Sceptre instead as I know that will last me over a day.

If the Caliburn A2 was “Pod kit of the year” material – then the AK2 is another! I really mean it!

I will keep this in rotation with my Sceptres and have even put the A2 back in the box!

It’s not on the market yet, but is this a pod kit you’re keen to try and buy? 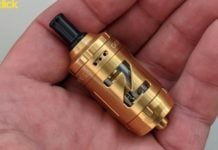