The DEA has stepped into the ‘war on vaping’ in the USA and will incinerate your vape device free of charge.

The Drug Enforcement Agency, best known for busting drug cartels and dealers, is holding a ‘Take Back Day’ this weekend and for the first time e-cigarettes are to be included.

It’s an annual event across America where old prescription and illegal drugs are handed in anonymously for safe disposal.

There are currently 5,250 drop-off sites dotted around the country and will be operating between 10am and 2pm.

William Stockmann is the Diversion Program Manager for the DEA and said they had been working closely with the department of health calling vaping a “growing and troublesome trend” adding:

Vaping is not considered to be safe for teens and for young adults.

We’re trying to get these vape pens or e-cigarettes off the street and out of the hands of the teens in a safe way.

In all seriousness this is a clever move by the DEA and health departments as e-cigarettes will be forever linked to illegal drugs…very worrying.

Plus if all these vape bans go ahead, then the DEA may be brought in to ‘fight’ the vaping black market… 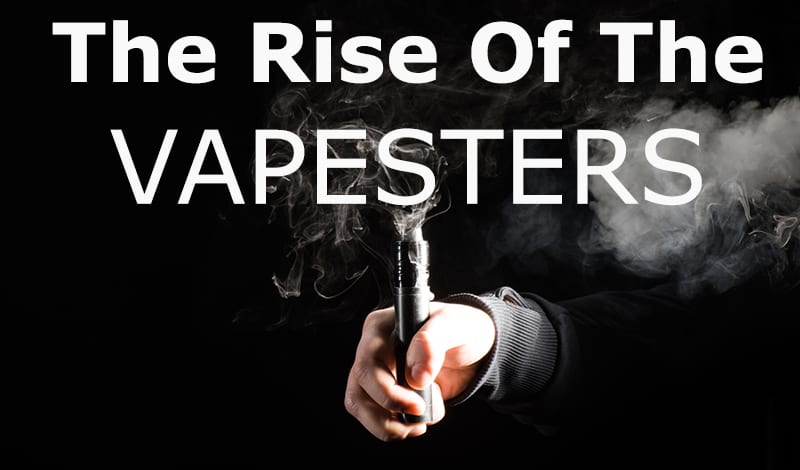 I wrote back in January:

The DEA had half of its resources stripped and moved to the coffers of the AVA – the fearsome and brutal Anti Vape Agency.

Nicotine was public enemy number one and the FBI –and the AVA led by the so called untouchables of the FDA were on a mission.

Once again truth is stranger than fiction!

Meanwhile here in the UK and once again showing the huge divide between us and the USA – a Bristol vape shop owner is offering a 20% discount on new vape gear if you recycle your old one!

Superior Vapour – based in and around Bristol refurbish the traded in devices selling them back at a discount to new vapers.

Oh my goodness where to start with this little gem from health bosses in New York State!

OK, in a bid to help vapers quit, the health department is offering nicotine patches – gums and lozenges…yes really.

It appears to be more than OK when used inside a Big Pharma backed product.

However what these buffoons have failed to realize is – they don’t bloody work and science proves it!

See my article: Do Nicotine Patches and Gums Work For Quitting Smoking? Not According to Scientists – for more info on that one!

The DOH is also offering a $16million cash incentive for organizations to come up with schemes that will help both smokers and vapers quit:

The Department added the service to the Quitline to address the growing need to help users of e-cigarettes break their dependence on vaping.

In addition, the Department announced the release of a Request for Applications (RFA) to award $16 million for the next five-year round to support healthcare systems in their efforts to help smokers and vapers quit through proven cessation methods, as well as the launch of a new statewide ad campaign to educate teens and their parents about the dangers of vaping.

Repeat after me – e-cigarettes are PROVEN to be the very best way to quit smoking and vapers reduce their nicotine levels significantly through their vaping journey.

Sadly that’s being ignored and instead cash is being thrown at Big Pharma – imagine my shock.

The ongoing outbreak of vaping-associated pulmonary illnesses plaguing New Yorkers and people across the country is a stark reminder of the addictive nature and potential dangers of e-cigarettes.

We are proud to expand our existing services to further assist people struggling with nicotine addiction in all forms to quit once and for all.

Andrew Hyland, PhD, Director of the Quitline and Chair of Health Behavior at Roswell Park, said:

Traditional cigarettes and e-cigarettes have one unfortunate thing in common: the nicotine makes the products incredibly difficult to quit.

Thanks to the Department of Health, we are pleased to be able to expand our services to help more New Yorkers.

Ummm, if you virtue signalling imbeciles are so worried about nicotine addiction why not ban lit tobacco too?

US Vape Scare is Costing Lives

Public Health England is warning that fear mongering stories in the UK media about the current USA ‘vape scare’ will cost lives.

John Newton – director of health improvement at PHE – is so concerned he’s written to Sir Norman Lamb, the chair of the pro-vaping House of Commons Science and Technology Committee.

He said the current spate of deaths and illnesses reported in the USA had been tracked back to illicit illegally bought contaminated cannabis cartridges adding:

We are concerned that the public seem to increasingly think that using a proprietary e-cigarette could be dangerous, which might stop smokers using them to stop smoking.

This reinforces the need to have clear and consistent communication from public authorities about the relative risks of smoking and vaping.

It is no exaggeration to say that inflating fears about e-cigarettes could cost lives.

Absolutely – however if the mainstream media bothers to listen – one doubts it.

Senator Calls For the Ban Of Chinese Imported Counterfeit Pods

Anti vaping Senator Chuck Schumer says more must be done to stop the import of counterfeit JUUL pods into America.

And once again it’s to ‘protect the children’:

When an adult goes from smoking regular cigarettes to e-cigarettes, that’s a good thing.

But when a young kid, 12, 14, 16, goes from smoking nothing to electronic cigarettes, that’s a bad thing.

Can’t argue with that.

Unsurprisingly JUUL agrees with the crackdown – I’m guessing NOT to protect the kids – but their profits which will obviously take a hit if more counterfeit JUUL pods flood the country.

We share Sen. Schumer’s concern and applaud his efforts as we continue to fight counterfeit and compatible knockoff products that are made with unknown ingredients, under unknown quality and manufacturing standards, and are often sold online without adequate age verification.

We welcome actions from government agencies to help fight this urgent problem that exacerbates youth access and undermines public health.

Turkey isn’t a country I plan to visit anytime soon – if ever – mainly due to it’s shocking treatment of journalists – and now vapers have come under fire.

Dictator – oops sorry for the typo – I did of course mean Turkish President Tayyip Erdogan, has said e-cigarettes will NEVER be manufactured or sold in Turkey.

He suggested tobacco companies were getting rich ‘by poisoning people’ and folks should drink tea instead of vaping…WTF???

They asked us for a place and permission to produce these (e-cigarettes).

We didn’t give it to them and we will not.

They want to invest in Turkey…Go and make your investment elsewhere.

For the record over 27% of people smoke in Turkey with many starting young with over 100,000 deaths from lit tobacco related diseases recorded every single year.

Whilst vaping isn’t illegal in Turkey – at the moment – the sale – manufacture and distribution is.

Whilst the SNUS products have been legally sold in the US, up till now, the manufacturers have not been able to market them with the line:

Great news indeed and all a little weird given the EU and UK – despite court action brought by the company and the New Nicotine Alliance – has banned the product!

Today’s action demonstrates the viability of the pathway for companies to market specific tobacco products as less harmful to consumers, but only following a thorough scientific evaluation by the FDA.

Our team of scientific experts examined these applications to ensure that the tobacco products meet the public health standards in the law.

Mark Oates of the NNA called for the UK and EU to rethink its approach to Snus:

It is inexplicable why the EU continues to perpetuate the ban on European smokers choosing to switch to snus – not only is the sale of snus permitted in the USA but they have now allowed one company to make the undisputed claim that “using snus instead of cigarettes puts you at a lower risk of mouth cancer, heart disease, lung cancer, stroke, emphysema, and chronic bronchitis”.

The difference in approach could not be more stark, and it is the EU which is being reckless with its public’s health, not America.

This time it’s a case of are you watching UK!

Vaping 101 is one of the best known UK based online vape shops and has now opened its first bricks and mortar store.

And trust me – this is no ordinary vape shop – it’s absolutely stunning looking more like an upmarket fashionable restaurant than anything!

I remember writing an article a couple of years ago that suggested the decor of vape shops was a bit too masculine lol – this one certainly turns that on its head!

Vaping 101 is a past winner of EcigClick’s vaping awards and has grown from strength to strength with extremely competitive prices.

Every single detail inside is bespoke, all furniture and fittings handmade by a local company known for their high end design in bars and restaurants in Aberdeen. The front of the shop is finished in an industrial steampunk theme, whilst the lounge through the back is an Amazonian rainforest theme.

From Copper bar tops, stunning Stab Wood conference table where they are running classes to help and educate Customers on vaping.

Corian tables at booths with built in wireless chargers where you simply sit your phone on the Vaping 101 Logo to charge your phone.

They have just installed Gigabit fibre and each booth has USB ports and Tablets secured to allow Customers to browse the full product range at Vaping 101.

Looks bloody gorgeous and you can find the shop at 253 Union Street, Aberdeen, AB11 6BR.

Shenzen might be the heart and spiritual home of all things vape but the Government is now fining vapers!

The laws kicked in on October 14th and vapers have already been fined 50 yuan ($7) after being caught vaping in public with 200 smokers fined too.

A spokesman for the Tobacco Free Initiative at the WHO Representative Office in China, said they welcomed the vape ban.

Just when you thought things couldn’t get any crazier lol.

More vape news on Sunday – that’s if my back is OK after two days at Vaper Expo – I’m far too old to manage all three! If you’re going have a great time.

I’ll be there Friday and Saturday and I know Ian aka Neash Vape and Gaz aka the Flat Cap Vaper from the EcigClick team will be there too.

My tips and advice for the show?

Buy a ticket – walk around and look at the shiny shinnies and try a few e-liquids.