Voopoo are one of those manufacturers that consistently develop fairly decent mainstream products, so is the new Voopoo Argus Pro kit another one?

I’d say Voopoo is best known for its ‘Drag’ range of devices, however last year, the Pod-Tank and PnP Coils really started to gain serious traction. The Voopoo Drag X and Drag S kits were super simple devices and the PnP Pod-tanks were easy to use and produced very respectable flavour and performance. If not a little leaky…

Another product from Voopoo to impress the masses last year, was the Argus GT Kit that the Legendary Kevin Jeffrey gave a glowing review. Its mix of classic styles and Voopoo’s innovative Pod-Tank ticked a lot of boxes and got a respectable 9.2 out of 10.

The Argus GT kit wasn’t enough for Voopoo, and they’ve pinched the name, and used it on what I could possibly call a re-designed Voopoo Drag S.

What Can We Expect From the Voopoo Argus Pro ?

The Voopoo Argus Pro comes in an awesome plastic case.

Not ideal for carrying around day to day, but certainly handy for holding accessories, coils and other bits and bobs. The device itself is powered by a whopping 3000mAh internal battery and can fire up to 80 watts.

In keeping with recent Voopoo styles, this weighty portable kit has a squidgy leather feel on he back and protected by a metal sub-frame, and of course makes full use of Voopoo’s PnP Pod-Tank. In keeping with the Drag X and S, the Argus Pro is purely designed to be used with the PnP Pod-Tank as it has no 510 Connection.

Now, there may be a 510 adaptor available, but there isn’t one included in the kit. At the top is also a nice airflow Sslider which glides with a nice amount of resistance but after a few weeks of use, e-liquid leakage and dust, it gets a little gritty.

On the front side of the device, at the top is a weird flippy flappy latch thing that Voopoo claim is meant for a belt buckle or something but for most, it’ll annoy the hell out of them.

Personally, it doesn’t bother me, its something to play about with whilst out and about.

Below the flappy thing, is a comfortable fire button followed by a generously sized display, your Up & Down button and a USB-C port for charging, and the Voopoo Argus Pro has a 2amp charging current rating. The base is interesting, the knurled circle makes it look like its removable so it can house perhaps a 18650, or 21700 battery. When in fact it doesn’t move, or do anything. but it does provide a nice solid base, so the Voopoo Argus Pro sits happily on its end.

Some of the Argus Pro devices come with a weird, paint splatter effect making the device look like its been sneezed on.

Fortunately the Black Carbon effect device doesn’t have this feature as I think it looks a bit silly.

The Voopoo Argus Pro comes with only one Pod.

And if you’re in the EU, you’ll most likely get the 2ml Capacity version which quite frankly is a pain so I strongly advise picking up the XL capacity version, you’ll thank me for it.

The Argus Pro pod tank comes with additional protection via a removable silicon/rubbery protector. The surround doesn’t fit very snug on the Po-Tank and after a while I took mine off as I spent more time sliding it back into place than actually vaping on the kit.

The pod tanks are extremely simple and are cross compatible with a number of new Voopoo products, also the range of PnP coils can all be used in the PnP pod tanks. The pod-tanks are a little on the tinted side, but not too smoked so it’s easy enough to check your e-liquid levels.

At the base of the Pnp pod tanks are 3 fairly sized magnets that make the pod tank click into the device nicely and are filled via the base as well. The push-fit coils press snugly into the base of the PnP pod-tanks and you can also use Vaporesso’s GTX coils in the PnP Pod-Tank.

Up top, the mouthpiece is non-removable and part of the pod itself, but its comfortable and nicely sized. There is also a more MTL styled version available which has more of a curved mouthpiece, ideal for MTL vaping.

Voopoo Argus Pro In the Hand

The Voopoo Argus Pro device is solid in feel, and design.

As a thumb firer, your fingers wrap comfortably around the squishy leather feel section, leaving your thumb either flapping the flappy metal clippy thing, or firing the device. The Argus Pro works almost as well as a finger firer, allowing your thumb to rest on the squidgy leather, but for me its more comfortable as thumb firer.

The weight is what impresses me with the Argus Pro, for a fairly small device it feels very substantial in the hand. Not Too heavy, just weighty and good quality.

Voopoo Argus Pro – How To Fill the PnP Pod-Tank Once installed, the device will automatically set the Wattage to the recommended.

Unless you change a few things in the settings.

The OLED display on the Argus Pro is bright and clear.

As simple as it is to use and navigate, there are a few functions to make note of.

Here’s how to operate the device:

When changing between Smart and RBA modes, you will also notice a small square with either A (Automatic Draw) or P (Manual Draw) or in fact A&P.

Changing this will of course change how you can vape, either via the Automatic Draw system, or manually using the Fire button. Or both!

How Does the Voopoo Argus Pro Perform?

Voopoo has also released the Argus, a 40-watt device that comes with a MTL pod-tank.

So its fair to say the Voopoo Argus Pro is primarily made for those who enjoy a Direct-Lung Vape, but that’s not to say it cant accomplish a MTL vape.

Considering the coils included with the Argus Pro, I treated this little baby monster as a cloud chucking direct-to-lung machine.

Recommended between 32-40 watts, the Argus Pro automatically sets the device to 35 watts and that’s where I enjoyed it, but at 40 watts its a little better for me.

At that wattage, the VM1 coil produces a nice cloud, slightly warm and fairly saturated. It’s by no means the best, but its more than respectable on the flavour scale.

Recommended between 60 and 80 watts, the Argus Pro automatically sets the deice to 65 watts, and that’s where I enjoy it most.

With the airflow slider wide open, you get a real decent Direct-Lung vape from this Coil. Arguably the best in its category. The fairly small VM6 coil plucks up as much flavour as I have experienced considering its size.

Yes, you can get slightly better flavour from larger coils in some sub-ohm tanks, but the VM6 is literally right behind it.

The only problem… 65 watts wont do your battery life much good, But who cares when you’re getting a decent vape right?

Highly rate the flavour from the VM6 coil.

The airflow slider on the Argus Pro does a really good job of tailoring your vaping experience.

With regards to noise, the Argus Pro really isn’t that noisy at all, and certainly not turbulent.

The 3000mAh internal battery is a compete thumbs up from me.

Its a fair size capacity considering the size of the Argus Pro. Battery life will obviously depend on how often you vape, and at what wattage but thanks to the USB-C port, and a 2 Amp charge, it charges in less than an hour meaning you can charge on the go to keep it topped up.

At 65-watts, I got around 6 hours life most days. That’s when the power output started to fade for me even though the indicator showed I may still have a quarter battery life remaining.

At a lesser wattage (30-45w) you’ll certainly enjoy the Argus Pro all day.

Does the Pod Mod Leak?

Not the worst, but they could be better.

Half of the problem is condensation from inhaling plumes of vapour, but the pod-tanks will leak quite happily after a day or so if left alone. So if you’re going to store this for more than 24hrs, I strongly suggest removing the pod tank from the device, and even drain the e-liquid from the pod if leaving for longer than a few days

I’m not entirely sure where the Argus Pro Kit sits in Voopoo’s range.

Is it just a variant to the Drag X/S to suit those who want a stronger device, perhaps for outdoor use? Either way – the Voopoo Argus Pro device is solid and comfortable to use.

The 3000mAh internal battery does a very good job with power delivery, and battery life, not the best with the lower resistance coils but still respectable.

For such a small device it packs a fair punch and has all the simplicity of use and portability that people who use these kind of devices is looking for.

Although the Argus Pro doesn’t come with any IP ratings and isn’t touted at smash-proof, bomb-proof or bullet-proof – I feel it could take a beating for sure.

Also considering the high capacity battery, even after 6 months I feel the capacity will still be decent enough to last another 6 months before you may need to look at buying a new one.

That’s of course if you plan on using this device every day.

I really can’t complain about the performance, flavour and vapour production of the VM1 and VM6 coils, in fact, the majority of PnP coils are very good.

If you want more info on the PnP coils, I compiled my thoughts when I reviewed the Voopoo Drag Max Special Edition Kit – and tried every coil including a bonus ceramic coil.

As it stands, the Voopoo Argus Pro would not be a good recommendation for a new vaper. More because as it stands, with the low resistance coils, it’ll be no good for a decent MT vape.

However, if you picked up some higher resistance coils, and perhaps the MTL Pod – You could happily use the Argus Pro as an MTL Device.

The Voopoo Argus Pro is for those who enjoy PnP, or GTX coils and want a tougher device with a respectable internal battery, and i very handy for walks in the park and strolls to the shop.

Have you bought the  Voopoo Argus Pro kit? 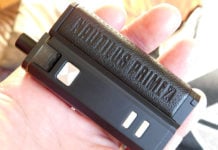