Vype ePen – The Future of Vaping? 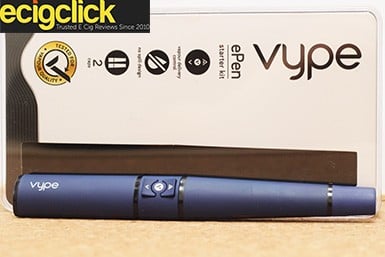 I have reviewed a number of Vype products in the past, each one gradually getting that little bit better as they evolve, their latest cig-a-like release was called the eStick which when compared to their initial releases was a much improved product.

They have also recently enter the ‘box mod‘ market with the Vype eBox.

Their latest product is called the Vype ePen, which as the name suggest is targeting the vape pen e cig market.

It’s interesting to see where the BAT owned e cig brand would go in terms of bigger battery devices after the proposed regulations by the European Parliament. After receiving the ePen could this be a glimpse into the future of e cigarettes? Is this a product that takes a step closer to fitting within TPD regulation guidelines?

Is it good enough to land a place on our recommended vape pen list?

Vype present their e cigarettes in a uniform way across product lines with the acrylic case. It all looks good, neat and tidy. Inside the ePen kit you will find:

The first thing about the Vype ePen is that it is unlike the majority of other pen style e cigs on the market. There was a device I remember called the E-Lips (I think that was the name) that comes closest but that never really took off.

The ePen is like an EGO battery that has been flattened slightly into an oval shape. The feel in the hand is a familiar rubberised soft touch material but the device feels a little ‘plasticy’ and light weight.

The battery has a 650 mAh capacity that gave me around 5-6 hours of use which is as expected for a battery this size. The threading, unsurprisingly, will only fit Vype cartridges. I suppose I need to take into account that this is for new vapers or their existing customers making the switch from their cig-a-like range so simplicity is probably at the forefront of their mind and rightly so.

There is no mention of what the two different voltages are but I suppose the above instruction kind of explains it all in a ‘that’s all you need to know’ kind of way!

The difference between the two voltage settings isn’t, for me, that noticeable. Yeah, the higher voltage button does sound like it’s putting more leg work into heating the e-liquid and gives a touch more vapour but the flavour difference is negligible.

The only real difference will come in running the battery down quicker if the higher voltage button is used consistently. The 3 click on/off function is also there which does of course come in handy and the actual buttons themselves provide a satisfactory ‘click’ when pressed.

Vype have made available spare parts with the ePen which is a welcome addition, a spare battery can be bought.

If you are considering this electronic cigarette I would recommend buying a spare straight away as back up and to use in rotation.

This just ensures you aren’t caught short with a dead battery.

Overall – The Vype ePen battery is a strange device for me. I’m all for change and new innovative products but the execution of this leaves a little to be desired. The two voltage buttons aren’t really necessary and it just all feels a little lightweight which thinking about it may be a plus point for many, especially new users.

The Vype ePen kit comes with two Blended Tobacco cartridge/cartomiser refills or Refill Caps as Vype calls them. They hold 1.5ml of e-liquid and are not refillable.

The ePen uses a cartomiser type design that has the atomiser built into the base.

It looks like Vype have produced a cartridge that would fit in with regulations, it is under the maximum 2ml capacity for a tank and it also looks as though it has been designed so as to prevent any leakage.

The latter is a good thing for sure, I had a good play around with the cartridge and not one drop of e-liquid anywhere but inside the container.

This, of course, ensures the cartridges cannot be refilled although I’m sure there will be ways around it, those that would want to do that though probably wouldn’t go for this device in the first place.

I guess that is the whole point of having something of this type of design that users cannot compromise and risk liquid getting all over the place.

So, once you have screwed the cartridge onto the battery comes the ‘ePen Top’. This is a sleeve that sits over the cartridge that has a hole in the end of which you draw through.

The addition of the sleeve finishes the whole look of the e cig off but if I’m being picky I’m not a fan of vaping through the rubberised plastic end. That’s a personal preference though and may not be an issue for others. The ePen I have to say performs well, the Blended Tobacco flavour is OK, not the best I have tried but not offensive and the amount of vapour produced is pretty good.

I just can’t get my head around what ultimately reminds me of something my doctor would prescribe to help me quit cigs. Take 3 drags, 8 times a day Mr Williams. It just has that kind of feel for me.

My other half, on the other hand wanted to pee on it, I told her it wasn’t a pregnancy test. The brief argument was settled by taking a quick drag, she looked horrified until I blew out a cloud of vapour.

Refills are available in a pack of three. There are just the three flavour options and one nicotine strength available as I write. Cherry, Blended Tobacco and Crisp Mint.

Prices are more expensive than the equivalent amount of e-liquid but these are of course pre-filled.

The prices are on the expensive side, it would be more reasonable to see packs of 5 cartridges for the same price.

Overall – The blended tobacco flavour was decent and the vapour volume good. The caps only hold 1.5ml of e-liquid though which heavy vapers will get through pretty rapid and with the prices for 4.5ml of e-liquid it could be just on the wrong side of expensive.

Vype do have a 28 day refund policy if you are not happy with the product.

Vype are available through a free phone number (UK), email and are also active on Facebook and Twitter. I also used their live chat system on site and had my questions answered within 3 minutes which is great.

I personally couldn’t shake the feeling that the Vype ePen was like using some sort of medical device prescribed to me by my GP or found on the shelf in the birth control section of Boots.

It has of course been devised to comply with the TPD rules and regs and from first glance I think it does this or at least it’s the closest I have seen.

It all just felt too sterile and I have to say it just didn’t work out for me, it wasn’t an e cig I particularly liked.

Having said that, this isn’t targeted to existing vapers. New users that want a ‘plug and play’, ‘set it and forget it’ type of e cig that has more power than a cig-a-like then this isn’t a bad choice as it’s super simple to use. You may only use it as an introductory e cig but If it gets you to ditch the cigs then that’s got to be a good thing.

Here are a few takeaway points.

Is this a glimpse at what the future of vaping could be like if and when the regulations come into play?

What do you think of the Vype ePen? Leave your review below.