So we have another addition to the Preco range – this is the VZone Preco MTL Tank. The VZone Preco range started with the Preco disposable sub ohm mesh tank. This was followed by the Preco One kit which included a mod designed to pair with the Preco Tank. Also there is a Preco Plus kit which uses a 18650 battery now too. 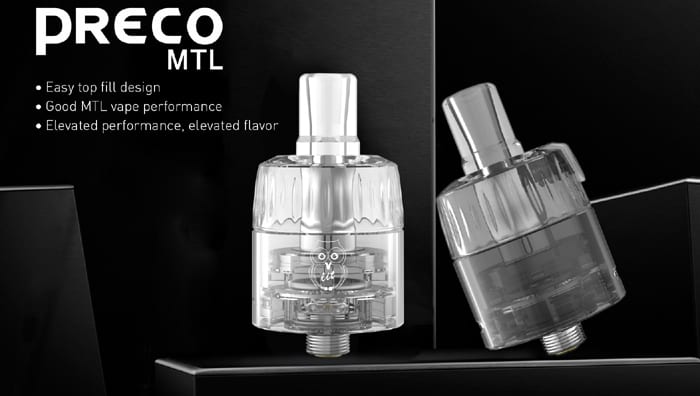 To follow on from the previous releases there is now a MTL version of the disposable tank.

MTL (Mouth to Lung) is a vaping style usually favoured by beginners or those who like to mimic the feeling of smoking. We tell you more in our Guide to MTL and DTL vaping styles.

The Preco MTL tank has a higher resistance coil at 0.9ohm and is rated for use between 10-25W. The best performance is apparently at 15-25W. So ideal for use on a single battery or internal battery mod.

However with the tank being 24mm in diameter this could rule out some single battery mods such as the Eleaf iStick Pico X. You get a top fill plug which you just pull out to fill with your own e-liquid. Plus there is an airflow adjustment at the base of the tank to tailor the airflow to your preference.

This type of tank is not very environmentally friendly as you throw it away when the coil is past its best. However for those who haven’t the time, patience or ability to faff around with the messy business of changing coils these disposable tanks are handy to have around. Here is an introduction video from the VZone Facebook page to show you more.

There are 2 colours to choose from – Clear and Ash. I have just reviewed the Preco sub ohm tank and found it to be a great performer.

I am glad that VZone are also catering to the MTL market as well.

Will you be pre-ordering a VZone Preco MTL Tank? Let me know in the comments below!