This section will cover what e-liquid it is made from, the myths surrounding e-Liquid and some of the scientific research that has been carried out on e cig liquid. Propylene Glycol is an organic compound that is a clear liquid without a distinctive smell. It is the part that carries most of the flavour of an e Liquid, not producing as much vapor.

It is recognised by the American Food and Drug Administration as safe for use as a preservative in foods. It is also used in healthcare and beauty products such as skin wash, shampoo and toothpaste.

It has been recognised by the UK medical community as safe to use in inhalers and for a variety of other medical health products delivered orally, intravenously and applied to the skin.

Vegetable gylcerin, also known as glycerol or glycerine, is made from plant oils. The type used in e Liquid is “food-grade” vegetable glycerin and is 99.7% pure. This is the part that produces most of the ‘cloud’ when vaping.

Nicotine does not cause cancer.

Nicotine is a naturally occurring substance found in plants. There are high levels of nicotine in aubergines (egg plant), potatoes, tomatoes and cauliflower. It has a stimulant effect on the body like that found with the caffeine in tea, coffee and some carbonated drinks. It has been shown to promote alertness, sharpness, relaxation and calmness.

Because nicotine also reduces appetite it has begun to be used as a method to combat obesity. Medical studies have also shown that nicotine prevents the onset of Kaposi’s sarcoma, bowel ulcers, reduces the chances of preeclampsia and allergic asthma.

There is evidence that nicotine has the potential to prevent and treat Alzheimer’s disease and delay the onset of Parkinson’s disease.

Scientific studies have indicated that nicotine can be used to help adults suffering from nocturnal frontal lobe epilepsy seizures.

Other research has shown that nicotine can be an effective treatment of major depressive disorder and is currently undergoing trials to help adults with acute OCD.

It is widely believed to be highly addictive but recent research has questioned if this is only when linked with other chemicals found only in cigarettes. The research was prompted due to the 93% failure rate of nicotine replacement therapies such as nicotine gum and patches.

Nicotine is a toxin which means it can poison small children and pets. Take care to make sure that you store your bottles of e-liquid out of reach and in a safe place in the house.

A number of flavourings used in the manufacture of e-Liquid are food flavourings but you should take great care to ensure that the e-liquid you use does not contain either oil-based flavourings or ones that contain Diacetyl as both are hazardous.

It has to be said they are also likely to be hard to come by in the age of TPD regulations. To be certain buy only 10ml bottles in the UK that, by law, need to be tested before they can be sold.

Most reputable vendors will tell you what is in their juice if you ask nicely, although the actual recipes will be closely guarded secrets!

It is known that some e-liquid ingredients can cause cracking, frosting or even melting of poly-carbonate, plastic or acrylic tanks and tubes. flavourings such as absinthe, cinnamon, spearmint, citrus and cola liquids can cause this damage and are better off being used in a vape tank that is glass, Pyrex or metal.

The flavours are part of a plot to lure children into vaping and then smoking:

Wrong, adults like Lemon Meringue Pie and Custard too.

Nicotine is bad for you:

Wrong, as previously mentioned, while it may be addictive it is no worse for you than coffee and offers many medicinal benefits.

No one knows what’s in e-liquid:

Wrong, we know very well what goes into them and Dr. Konstantinos Farsalinos has been carrying out extensive peer reviewed e cig studies into their safety.

Yes, but water is a chemical compound – as is bacon, cream donuts and chips.

Wrong, PG can be used as part of anti-freeze but VG can be used to make explosives – an e cig is not a bomb either. The worst thing will be that you may be one of the very few people allergic to PG and need to use 100% VG vape juice.

Read our full post on e cigs and antifreeze here.

There are numerous e-liquid brands and flavours available, but for us that is half the fun of vaping, trying new flavours. If like me, when you start your vaping journey don’t expect to find the perfect flavour for you straight away, be prepared to experiment with different e-liquids.

To help you out we have listed some of the best vape juice brands that we have tried here. A great mix of flavours as well as an excellent starting point. 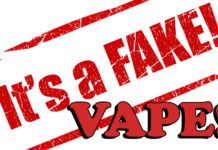 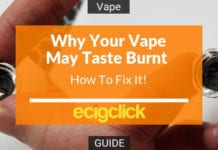 7 Reasons Why Your Vape May Taste Burnt And How To Fix It! VG VS PG In E Liquid: All You Need To Know