Oooh I have got my grubby mittens on a lovely Wismec HiFlask AIO / Pod mod thingy to review.

First let me tell you a bit about this odd little device.

It is a sort of hybrid between an AIO (All In One) and a Pod Mod. You have a refillable pod (tank) which slots into the battery housing.

There is an adjustable airflow dial and a catch to release the pod. The pod contains a removable coil head which is really handy and a lot less waste than disposable pods which when the coil fails are resigned to ending up inside some poor Seals eye somewhere.

The coils are quirky too – they follow a similar design to the Joyetech Dolphin – in that the coil sits in a plastic housing which is inserted into the pod.

In Wismec speak the coil head is a “JVUA System” – which is Juice Vertical and U Airflow. To translate this means the 0.35ohm coil is horizontal in the pod and the liquid enters the side of the coil! The coil head unit fits into the pod like a drawer! Inside is a 2100mAh battery which can output up to 40W which is pretty decent for a lightweight small device.

There are 4 colours to choose from – Black, Silver, Blue/White and Red.

This item was sent for the purposes of review. As always my views are my own. I was sent the Wismec HiFlask in the Red version. 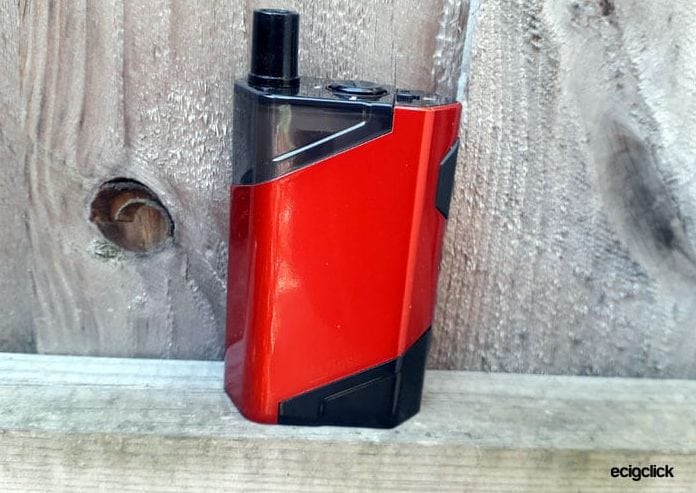 It is a very plastic-y feeling device however it looks metal if that makes sense. The red parts are actually like a metallic coating – hence I thought it would be made from metal! No rattles or wobbles everything is tight and fits as it should.

On the top of the device is the mouthpiece which just feels perfect – I don’t know why but it really suits the vape from this. You have an airflow control dial – more about that later and a catch you move to release the pod from the battery. There is a battery indicator of sorts a dim light behind the fire button which isn’t that easy to see and it is a bit hard to interpret.

This does feel nice in your hand and the fire button lines up perfectly with where you would want to instinctively press. How Does the Wismec HiFlask Perform? Battery Indicator LED – the battery indicator LED will illuminate after each fire button press. The duration/pattern of this light indicates the battery capacity remaining…

How to Fill The Pod

Sadly you do have to remove the pod to fill this.

It is pretty much a guess to the e-liquid level when using and refilling. I have the 2ml pod and it seems full of “stuff” I assume to reduce the capacity – which means there is very little to see through it – you know it’s full when the liquid splurts back out of the refilling hole. Not good is it.

How to Change The Coil

This is excellent as you can replace just the coil head on its own. Some pod mods if the coil fails the whole pod needs to be discarded which is expensive and wasteful.

This isn’t easy though – the coil is super snug and I had to get a screwdriver to prise the coil drawer out of the mod.

Plus wait for a while after vaping as the whole white area where the coil is contained becomes blisteringly hot!

I used some of the beautiful IVG E-liquid I was sent to review in the Wismec HiFlask. It is 70%VG and I added nicotine to take it up to 6mg nicotine.

I also tried my usual Sticka Bombz Fruit Salad e-liquid which is 80% VG.

This part of the review gets a bit rambly – I am so sorry – but the first 2 pods/coils were faulty and when I was about to give up the 3rd pod actually worked – so please bear with me….

I filled up with the 70%VG IVG E-liquid and taste wise this is a bit weak and vapour output isn’t great.

This gets very hot – even the plastic pod and mod body get hot.

It is worst when airflow is on almost minimum – which is where I do tend to have it. There isn’t much vapour production so I am holding down the fire button for quite a while to get a decent feeling vape.

With the airflow in maximum I am still having to do 5 second presses to get an inhale but this is better than in minimum.

When you have been vaping and take out the pod to refill the white part which contains the coil is almost finger cookingly hot – red hot and don’t touch the base of the pod where the electrical connectors are as this will burn. I found out the hard way.

This has 0.35ohm coils so higher PG/Nic e-liquid may be too harsh.

So I installed the second coil head and used some 80%VG e-liquid – my normal liquid with 6mg nicotine to see if it performed any better.

There is more vapour this time. The vapour output is better to be honest. But the flavour isn’t. It is also still getting hot.

This has been such a disappointment – I was pretty shocked so had a look around online to see what others think of this device. I watched a couple of reviews on YouTube and they seem to have tons of vapour! Even on wide open max airflow I am getting barely more than a standard pod mod. These reviews do appear to be on the 5.6ml pod version – is the capacity reducing stuff inside the pod affecting the performance?

It seems to be very underpowered and this is making the device get hot too. The reviews I saw were using 70% or higher VG e-liquid. I have tried 70 and 80%.

As I was having doubts about whether the issue was due to me having the 2ml pod version – Wismec kindly sent me some replacement pods with coils in which are the original 5.6ml versions.

Already just visually the 5.6ml pods look better. The 2ml pods are full of white stuffing – either plastic or silicon to reduce the pod capacity. This makes viewing the e-liquid level pretty difficult.

I was thinking all the “stuffing” is possibly affecting the performance and could also contribute to the pods getting hot in use.

So I have fully charged the battery and used my 80% VG e-liquid.

This time around the performance is actually slightly better.

The vapour has just actually made me cough as I was getting so little on the other pod it took me by surprise!

I had the airflow set to kind of half way between max and min and getting a lot more vapour than I was.

The taste and heat considering this is a 0.35ohm coil is still not what I would expect. I have had a nicer vape from the Joyetech Cubox AIO and that uses 0.6ohm coils and much more flavour.

Just to add to the woes of the HiFlask – I am now getting dry hits – does this thing get any worse? The only good thing is that it doesn’t leak.

Ok I feel bad about giving this such a lousy review so I have popped a new pod and coil in and trying with 70%VG e-liquid just to see if I can find something positive to say.

Oh and it gets even worse filling this with a bigger spout bottle means you get airlocks and you end up covering yourself and your desk with e-liquid too as it fountains back out of the filling cap.

However this time I am pleasantly surprised- phew – just when I was about to totally throw in the towel with the Wismec HiFlask it has redeemed itself.

I can only assume there were 2 faulty pods and it doesn’t like 80% VG e-liquid. The flavour is lots better, no dry hits and for the first time since I picked this little git of a device up – I am enjoying it!

With the wide open airflow there is loads of vapour and this is a nice warm tasty vapour now too! But I will add the device is still getting very hot!

I was going to abandon this bit of the review as pods 1 and 2 were just an epic fail and vaping on this was becoming a very unwelcome chore.

With the 3rd replacement pod things improved massively – to the point where I can now use this long enough to get an idea of battery life!

So with pretty regular vaping I got just over 7 hours of use (2 full 5.6ml pods) on 1 charge of the battery.

The power output didn’t seem to reduce either right down to the 0-9% battery indication where it did drop off a bit.

This review has taken me weeks – due to the hurdles this thing has thrown at me right left and centre. The first 2 pods I used were nothing short of a huge failure.

The second 5.6ml pod performed way better- I enjoyed vaping on this then! I found it was really efficient on e-liquid and the battery life was excellent too.

However some of the negative points still remain such as difficulty in pod and coil removal, difficulty in filling, pod gets hot, airflow dial hard to grip, battery indicator light hard to see etc…

This really seems to be below Wismec’s usual high standard. The inconsistent quality of the pods could make this an expensive device if it takes several pods to find a good one. A lot of people may have given up with this after the pods kept failing and wanted a refund.

The Wismec HiFlask did redeem itself but it took 3 new pods plus 5 coils to get there.