Introduction To The Flux Kit by Wotofo and Rig Mod!

So, it has been a while since Wotofo released a regulated mod. If memory serves me correctly, it was the Thunder or the Chieftain box mod. But now they are back, in full force with the Wotofo Flux Kit, in partnership with Rig Mod. A huge player in the mechanical mod scene!

The Wotofo & Rig Mod Flux Kit consists of the Flux Mod and the Flow Pro SubTank. The Flux Mod is powered by dual 18650 batteries and has a max output of 200w. It also sports a bright 1.3″ colour screen, a side firing bar and a customisable LED bar running up the centre. The Flow Pro SubTank is a top fill tank that uses a “mesh-like multihole coil” Which is also compatible with the Smok Baby Beast Coils too! Team that up with a 5ml tank and adjustable bottom airflow; could this be the next best subtank?!?

The Wotofo & Rig Mod Flux Kit comes in a choice of 9 different colours and is currently priced between $79.99 and $94.99 over at the Wotofo website. I have seen it for roughly £70 on various sites over here in the UK.

This device was sent to us for the purposes of this review. As always, my opinions are honest and my own.

See The Wotofo Flux In Action With my Video Review

The drip tip is 810 sized and made out of delrin. It has a nice curve to it and fits in the mouth quite comfortably! 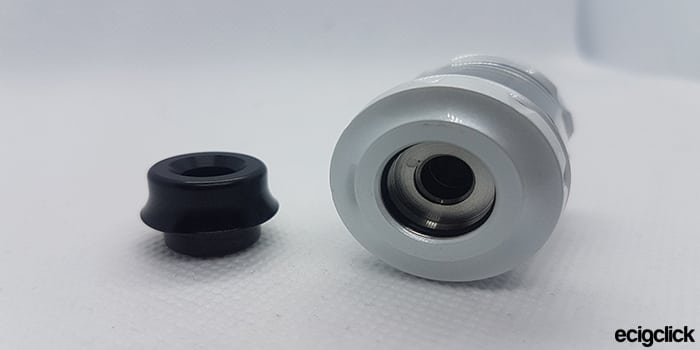 You can also use the included 510 adapter to use your own 510 drip tip if you wish.

Rotating the top cap reveals a single kidney shaped filling port surrounded by a silicone gasket. (There isn’t an indication to show you where to push to open it though…) It is a big enough size to accommodate most bottle nib sizes. You get two options of glass in this kit. the 4ml standard glass and the 5ml bubble glass. 2ml is also available for TPD regulated countries. 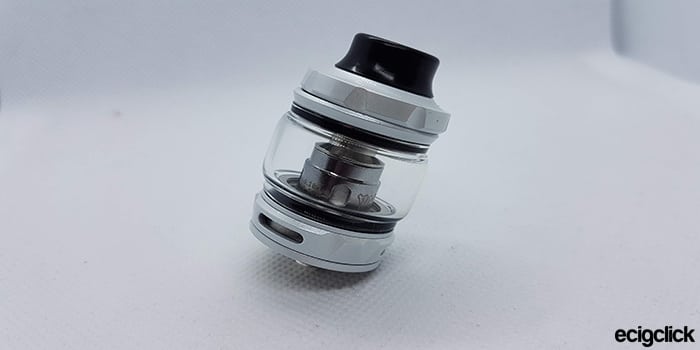 I would have expected a bigger capacity bubble glass in all honesty, something nearer the 7 or 8ml mark.

On the base we have the airflow control ring. It is very smooth to adjust, but has the right amount of stiffness to not let it adjust whilst it is in your pocket or bag. The airflow holes come in the form of three large cyclops slots. In between the airflow slots are indents that mirror those on the top cap which aid grip. On the base there is some Wotofo branding as well as the Wotofo website. 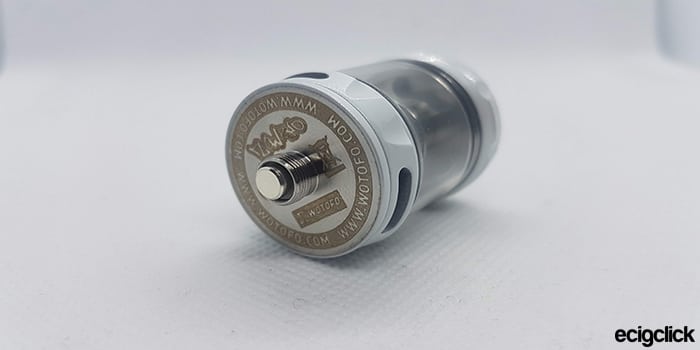 Overall, the construction and look of the Flow Pro Tank is pretty good! It looks perfect on top of the Flux Mod. The only downside I have to the tank is the lack of showing where to open the top fill port. I can’t see, and I still can’t find any identifying marks.

At the top of the Flux we we have the 510 connector which is centrally mounted. it has as stainless steel surround as well as a gold plated, springy positive pin.

Although the maximum width of the Flux Mod is 30.3mm, you can put 30mm atomisers on there, but due to the chamfered edges, I would recommend nothing bigger than about 26mm.

The Front & Back of the Device

On the front of the Flux Mod we have a large 1.3″ colour screen hidden behind tinted glass/plastic to give it a bit more of a stealthier look. The screen is so simple and easy to read. You have the wattage and firing profile in the middle, voltage and resistance to either side, and the battery levels in the middle. No bells and whistles. Just simplicity.

You have 3 different firing profiles: 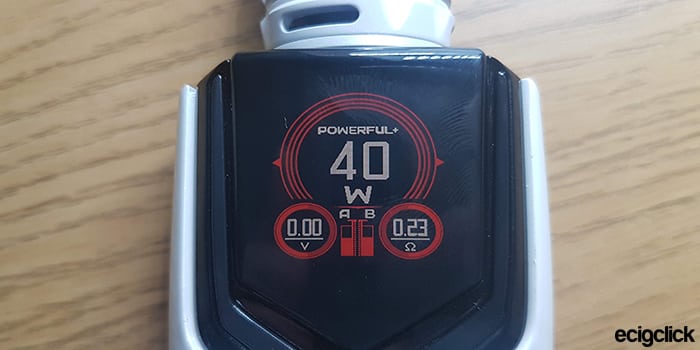 Below the screen we have the + and – buttons which are nicely disguised into the front mouldings of the mod. Running down the centre of the Flux, there is an LED light bar which is customisable in many different ways. You can also turn it off if LED’s aren’t your thing, but I think it’s great! Below that is the Micro USB port which can be used for charging the batteries on the go. Although this does work fine, I would always recommend charging your batteries externally when possible to do so. On the back of the Flux Mod, we have the Rig oil tower inside a winged shield, and that is pretty much it! Stealth seems to be the main theme with the Flux Mod, and the firing bar ties in perfectly with that theme.

On the front left of the device, the whole side panel is the firing bar. 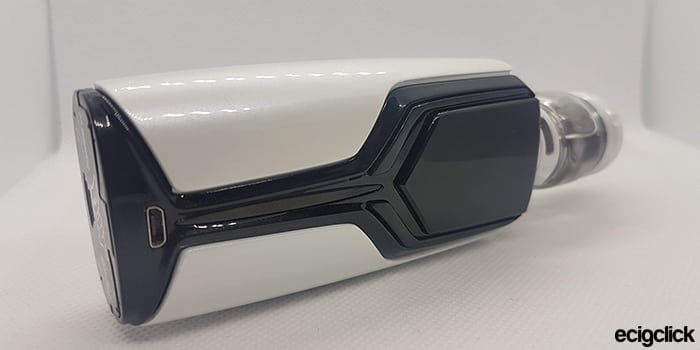 Pretty similar to the old Smok Alien, where all you had to do was squeeze the mod to get it to fire.

At the base of the Wotofo Flux Mod we have the battery door. Your typical flap style door with some venting as well as the Wotofo, Flux and Rig Mod branding. Slide it to one side to open, and you are met with the battery polarity clearly marked on the door as well as the contacts. Well, what can I say? The Flux Mod is just amazingly easy to use and navigate through. No fancy menu systems, no temp control or crazy power curves. Just ‘standard’ ‘powerful’ and ‘powerful+’ which gives a little boost in the early stages of pressing the firing button.

I think it looks gorgeous too. Everything just flows really nicely, and the LED light bar gives it that extra special touch just to change things up a bit.

The Flow Pro 0.18Ω coil is what comes preinstalled in the tank as well as the one that is given as a spare in the kit, and I tell you what, it’s pretty damn good!

As shown above, it is rated between 40 and 60w, and my preferred wattage has been slap bang in the middle at 50w. Don’t get me wrong, the flavour is still good up until about 58w, but to me, 50w offers the best for flavour, clouds and coil longevity! Don’t forget that you can replace these coils if you wish with the Smok Baby Beast coils. Not that I would recommend that, as I’m not a huge fan of Smok branded tanks and coils. Stick to the original Wotofo gear 😉

Well, Wotofo have done it again. Smashed it right out the ball park with the collaboration with Rig Mod.

Overall, I have nothing bad to say about the Wotofo Flux kit that would make me go ‘DON’T GO OUT AND BUY IT!!’

If I were to make a kit, then this would be the base on what I would design it on. it does the job, and it does it EXTREMELY WELL.