Introduction To The Wotofo Recurve RDA

Today we are looking at the Wotofo Recurve RDA – A collaboration between Wotofo and the popular American YouTube Reviewer, Mike Vapes! The Wotofo Recurve is a 24mm RDA and gets its name from the curvy barrel design, as well as the same curve featured on the included drip tips. It is a single coil RDA and even the deck has some amazing curves in it as well!

Currently priced around $23.99 and £24.99, The Recurve RDA is available in six different finishes which are stainless steel, black, gunmetal, blue, gold and rainbow, but today I am looking at the black Version.

See The Recurve RDA In Action With My Video Review The drip tip is 810 sized and made from resin. I really like the mottled pattern on this! The curve of the drip tip fits in the mouth very comfortably too! Also, you can use the 510 drip tip adapter that is included in the box to use your own 510 sized drip tip.

Below the drip tip, is the airflow barrel. It is made from a thick stainless steel. The first thing that sticks out for me, are the sleek curves on the sides and how thick it is! Drilled into opposite sides of the airflow barrel are the airflow holes. There are 6 holes on either side. If you turn the barrel on the deck, you can change the airflow to what suits you best.

In between the airflow holes, there is Recurve engraved into the metal.

The inside of the Recurve RDA is equally as curvy! At the top near the drip tip, it is domed to produce some absolutely lovely flavour!

The deck of the Recurve RDA is unlike anything I have seen before on an atomiser!

Shaped like a half-pipe with holes drilled into the side for the airflow to hit the coil perfectly. The postless deck also allows quite large coils to be installed in between the two curves. The juice wells on the Recurve RDA aren’t massively deep, but they do the job well enough not to complain about them. You access the post screws via the side of the RDA. Both Phillips head or a flat head screwdrivers can be used. Below these are two large o-rings which secure the top cap to the deck.

At the base of the RDA there is the new Wotofo branding, Recurve, Mike Vapes signature and certification stamps, as well as a nicely protruding 510 centre pin which can be exchanged for the hollow version if you wish to put on top of a squonker. Firstly, you need to cut your coil legs to length. Included in the kit are two L-shaped tools which are used to get the exact leg length needed to have your coils positioned correctly over the airflow. Next, place your coil over the longer portion of the tool and slide it towards the end. You then want to cut the coil level with the short part of the tool. After that, flip the coil around and cut the other leg in the same way. Then you need to determine what post screws to undo. Once you’ve figured this bit out, unscrew the two screws and place the coil legs inside the hole. Tighten them up and tweak the coil so that it is centralised between the curves of the deck. Then it’s onto the pinching and pulsing stage. Get them coils glowing from the inside outwards without any hotspots.

After you have let the coil cool. Grab your vape cotton, put it through the coil and floss it slightly to create a little gap between the wick and the coil. 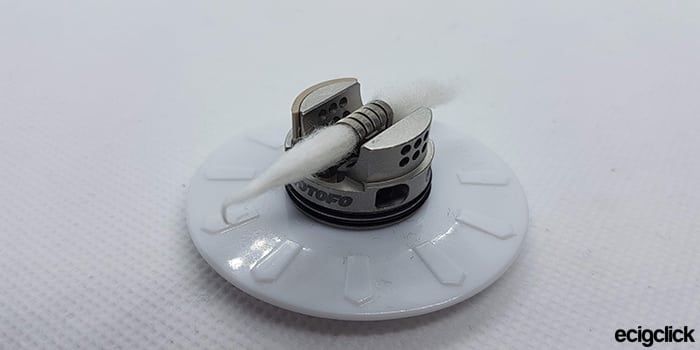 In terms of wick length. I have found that cutting it just outside the deck is best. Tuck those wicks into the juice well, get some juice on it and you are good to go!! The flavour… Bloody amazing! With the airflow fully open, you get a nice amount of restriction. The flavour just seems very pure even at low wattages! For me it is perfect at around 40w, but I do change it up or down a few watts depending on what e-liquid I am on.

In terms of cloud production, they’re about average. But I would say that this RDA is more of a flavour chasing atty than a cloud chucker.

The airflow on the Recurve RDA is pretty much spot on as well. Having it wide open offers a nice amount of restriction. It’s not 100% free flowing, but it’s damn good!

Cranking it down obviously tightens the airflow up quite a bit. But on the lowest setting I would say that it’s a heavily restricted direct lung hit. I don’t think there’s a chance in hell that you will be Mouth to Lung (MTL)-ing this RDA.

The Wotofo Recurve RDA is an amazing RDA. That amazing that it’s now my flavour RDA of choice. Perfect in more ways than one and I would recommend it to anyone looking for a new flavour orientated RDA!