The Vaporous RDA: New addition to the impressive fleet of RDA’s by Wotofo. But how did I get on with it?

Today we are looking at the Wotofo Vaporous RDA. It is 24mm in diameter and available in two different finishes; black and stainless steel. It has two different airflow options, as well as multiple ways to build on the deck, as it has ordinary post holes as well as a Goon style clamp system on top! Keep scrolling to see The Vaporous RDA in action with my video review..

Included with the Vaporous RDA is a wide bore drip tip as well as an 810 drip tip adaptor. These are both made from Ultem and fit nice and snugly in the top cap of the device. 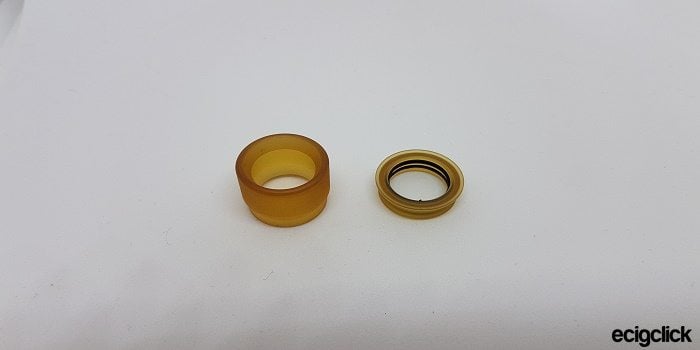 A beautifully machined piece of stainless steel. On the exterior, it has chamfered edges to add a little bit of grip. On the inside it is conical which is renowned for producing exceptional flavour. Half way down the barrel are two pairs of airflow holes. The larger set is for clouds, the smaller set is for flavour. So on the outside we have the Vaporous logo engraved on one side, then on either sides are the airflow holes. Once again, this is beautifully machined and has no burrs or sharp edges. On the inside it has a ridge to prevent the inner airflow control barrel from being pushed too far into the outer barrel. 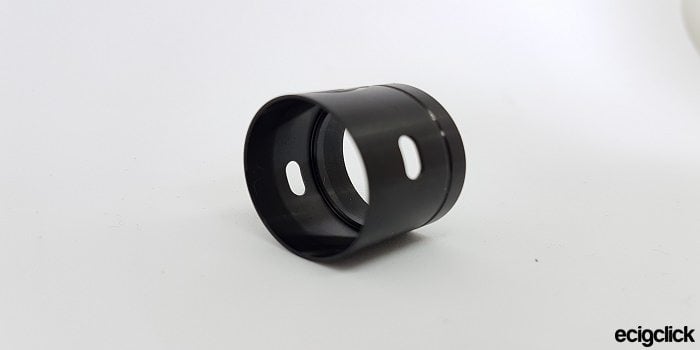 Now this is the business end of things. You are met with two chunky posts with Phillips head screws on top. Four reasonably large holes milled into the posts, and on top of them are two, Goon style clamps.

This give the user multiple options on how to build on this RDA. You can add dual, or even quad coils if you’re feeling a bit experimental! The posts are nice and sturdy, I’ve got no movement whatsoever with the units I have received. The Phillips head screws are of average quality too. They could be a bit tougher though. 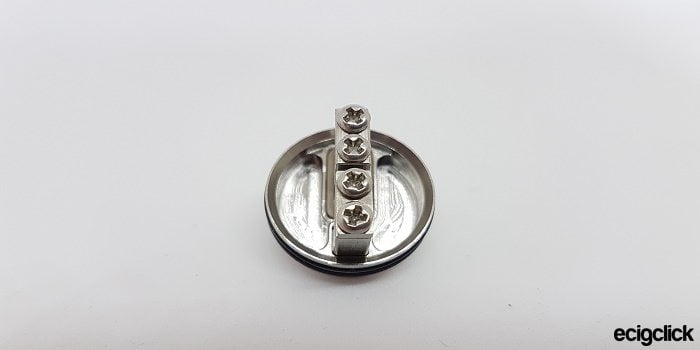 The juice well is pretty deep which helps if you tend to over drip or over squonk. Yes, I said squonk as well. This RDA comes with an additional 510 pin that is hollow, so you can put this RDA on a squonking device and squonk away to your hearts content! With both of the 510 pins on my RDA, they protrude a nice amount and I would be happy to use them on a hybrid mech device. Please double check yours before using, as it may vary between every RDA. How Does the Wotofo Vaporous RDA Perform?

Amazingly. Honestly, If I could sum up this section in one word, “amazingly” would be it.

Once you get it coiled up with the coils provided, wack some decent wick in there and crank up the wattage, the flavour and clouds are pretty damn exceptional! I suggest you have a play around with the airflow options though, just to get it spot on for you.

Ease Of Build On The Vaporous RDA

Using the coils provided, they go into the post holes with ease. Just get the coils centered over the deck, clamp them down with the screws, cut the legs off and job done!

It’s like someone has flipped a Velocity deck on its side. Plus the holes are in the right positions to accept the upper and lower legs of the coils If you’re using the Goon style clamps, I would suggest starting off with some simple 24 or 26 AWG wire just to have a practice. But if you are familiar with the Goon clamp system, use your imagination and get some crazy builds on there!

So, the flavour and clouds vary depending on what coils you use and what airflow option you use. But to keep things simple, I am using the coils provided, changing the wattage and using each airflow option fully open.

So, with the wider airflow option, I am getting a pretty decent amount of flavour and thick and dense clouds. Even at 60w, the temperature is quite cool.

It’s only at around 80w that I am starting to feel any amount of heat from the vapour. I think that anything below 50w on the included coils is too low though.

Now onto the slightly closed off airflow option. It’s barely noticeable through the outer barrel holes, it must close it down by about 1mm on either side in total. But, the change in airflow as you inhale is definitely noticeable. You get the perfect amount of restriction in the airflow and the flavour is turned up a few notches, and blimey is it good!

Once again, anything above 50w with the standard coils is recommended. And my preferred wattage has been 66w. You’re getting a great amount of flavour, acceptable clouds and a good temperature coming through the drip tip.

Which do I prefer? I’m not sure. It all depends on what mood I’m in. So if I had to choose one to use forever, I would choose to use the flavour option on the Vaporous RDA!

The Vaporous RDA On Various Devices

See The Vaporous RDA In Action With My Video Review

Blimey, what can I say? I would have to say that this is one, if not THE favourite RDA that I have ever vaped on. The flavour and clouds are spot on. It’s easy to build on. You have the option of using the squonking pin and the airflow options are great!

The Wotofo Vaporous is a brilliantly versatile RDA! Absolutely spot on!