100 Reasons To Quit Tobacco is a new stop smoking campaign from the World Health Organization – but vaping is once again ignored!

Whilst it’s good to see the WHO launch a year long initiative, e-cigarettes don’t get a look in, and the reason why is blatantly obvious as you’ll see…

Vaping continues to be proven as the very best way to quit smoking – however those unelected idiots over at the WHO have a real and I mean real anti-vaping fervour about them. Checkout my articles for proof:

I could link to plenty more – but you get my drift…biased towards vaping ain’t the word.

The WHO campaign launched last week, is titled: More Than 100 Reasons to Quit Tobacco – and is aimed at helping 100million smokers around the world quit lit tobacco – all very laudable.

WE KNOW they don’t work – and so does Big Pharma AND Big Tobacco – see my article: Do Nicotine Patches and Gums Work For Quitting Smoking? Not According to Scientists

In that piece I show how the big two corporations have known for years they don’t work but buddy up in a bait and switch – kill and cure scenario – profitable to say the least.

And that’s sadly all the WHO seems to care about when it comes to Tobacco Harm Reduction – lining its own coffers.

Others supporting the initiative includes Amazon Web Services, Cipla, Facebook and WhatsApp. I wonder what the WHO thinks about Facebook allowing vaping on its platform…still so long as they get the money rolling in let’s turn a blind eye…maybe… 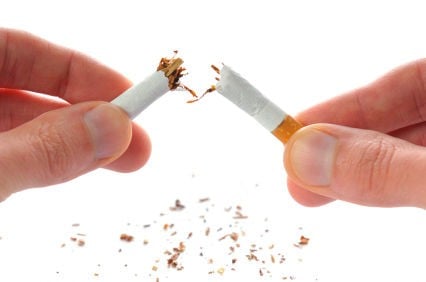 It actually made me laugh out loud and snort my coffee down my nose…clean shirt too lol.

Now the Allen Carr’s Easyway stop smoking programme may have seen a drop in uptake for the once extremely popular system with the arrival of e-cigarettes.

Or at least, the team behind it have gone on an all out media blitz attacking vaping…things that make you go umm…

Indeed I reported on this back in December last year: Bad News For Instagram Vape ‘Influencers’?

That piece showed a number of complaints had been made over BAT’s use of ‘pop star‘ Lilly Allen vaping on a Vype Pen.

One of the complainants? Allen Carr’s Easyway addiction clinic that suggested the posts were targeting youngsters…‘quelle surprise’ lol…

In fact, John Dicey, Worldwide Managing Director of Allen Carr’s Easyway, is on record as saying:

As soon as the e-cigarette phenomenon hit the UK we immediately became aware that e-cigarette users were smoking normal cigarettes whenever they could and using e-cigarettes at times when they couldn’t.

We also discovered that many of the e-cigarette users who were attending our clinics understood that their intake of nicotine had actually dramatically increased since they started vaping.

They found that they vaping inside the home and other places where previously they’d have been forced to go outside to smoke a real cigarette – thus forcing them to cut down.

Anyway…back to the WHO…

If you think I’m exaggerating at just how biased the WHO continues to be towards e-cigarettes, take a look at points 14 to 19 out of the 100 reasons to quit smoking where it attacks vaping:

It’s all scaremongering BS – but if it comes from the WHO it must be true is the motto most anti-vaping governments and groups parrot.

The campaign’s main focus is on a select bunch of countries including the USA, Poland and Russia…it seems the UK is off the list…

Maybe they know they’d get short shrift from these shores where vaping is welcomed and positively promoted by health organizations and to some extent the UK Government.

Anyway, I won’t bother linking to the 100 Reasons To Quit campaign – I really don’t want to give them any of our ‘link juice‘…

USA Vape Mail Under Threat and Could Mean Jail Time For Shop Owners!!!

Vapers in America face a shut down of all vape mail as a new legislation gets a sneaky amendment that could mean 3 years in jail for ‘offenders‘ – WTF???

The 2021 omnibus budget bill is currently sailing through the legislative process, with another vote TODAY December 16th 2020.

Contact Senator McConnell and urge him to reject a ban on mailing vapor products through the USPS!

If passed, the bill will:

…outlaw vape mail through the US Postal Service and within six months it will be illegal to ship any vapor products via USPS.

Worrying to say the least…

While this is not an all-out ban on online sales, most small vapor businesses do not have the infrastructure or ability to comply with these rigorous requirements.

Penalties for not complying with the PACT Act include up to three years in prison.

For the few who do, it would raise the cost of purchasing vapor products for people who depend on being able to have safer alternatives delivered to their door by requiring signature on delivery.

So why this sudden threat to ban vape mail through the United States Postal Service you might ask?

It’s all about ‘saving the children’…

Oh FFS… *bangs head on desk for the umpteenth time*

The supporters of this bill argue that preventing the shipment of vapor products will prevent teens from getting their hands on it, and reduce youth usage.

What they don’t tell you is that less than 6% of youth report buying vapor products online, according to the CDC’s 2018 National Youth Tobacco Survey.

Most young people report getting vapor products and other age-restricted products from friends, family, and informal sources–sources that are about to become much more popular after September.

To say America’s vapers are under threat is an understatement – and it can only get worse if Biden and Harris get the keys to the White House.

Politicians in Quebec are wrongly blaming the the need to clampdown on vaping on lung disease EVALI.

As the world and its oyster knows, EVALI had absolutely nothing to do with vaping on nicotine products – but hey once again don’t let the real facts get in the way of anti-vape legislation.

The EVALI outbreak in America earlier this year, saw hundreds of deaths and serious illnesses among people using illicit street bought cannabis cartridges. It was a ‘thinning agent’ Vitamin E acetate that was found to be responsible.

Health Minister, Christian Dubé, has announced a seven step plan which includes a complete flavour ban except for tobacco.

With the growing popularity of vaping products, especially among young people, it becomes imperative to act to prevent a new generation from becoming addicted to nicotine

Blah Blah Blah…we gotta save the kids and screw the adult smokers literally dying to quit.

While nicotine vaping was not the cause of the EVALI outbreak, it should serve as a warning of the dangers of the black-market.

Minister Dubé’s proposed policy will not only force thousands of Quebecois back to smoking but will expand the black-market.

Illicit sellers are not subject to age verification law or manufacturing standards.

Should this policy be implemented, Minister Dubé must acknowledge that he will be responsible for endangering public health.

and finally…Tragic Death Of Les Pickin

The UK vaping community has been shocked by the sudden death of the extremely popular Les Pickin from the Yorkshire based Juice Cabin.

As well as running the shop, Les was also behind the hugely popular Shekem Shekit and Net Tobacco juice ranges.

Tributes have been pouring in from the wider vape community.

Shocked isn’t the word for what I’m feeling right now, I was only chatting with him a few days ago about a selection of tobacco liquids he sent over for Christmas.

All my thought go out to Les family and friends 🙁 R.I.P Les, you are going to be missed by a lot of people.

Just seen this guys…holy shit, Les was a good friend and an amazing human being my thoughts are with his family at this terrible time…rest easy Les you will be missed my old friend.