The Gate RTA by Ambition Mods –

Today I take a look at the Ambition Mods Gate RTA which I’ve got to say for a Mouth to Lung (MTL) tank impressed no end. More on that though later on.

Ambition Mods are a relatively new company on the vaping scene, established in 2018 with the release of the  C-Roll RDA and the Spiral RDA. Ok, before we start, I will have to admit, I got the Ambition Mods C-Roll RDA when it was released, I never had a good experience with it at all, you can see the review for this on my YouTube channel, let’s hope my time with the Gate RTA is a more pleasant experience.

My first thoughts when I unboxed the Gate RTA was that it was a very well built device and a perfect looking Mouth to Lung (MTL) RTA. My top MTL RTA so far is the Exvape Expromizer V4 so lets see how the Gate RTA performs.

This device was sent to me for the purposes of review by Nature Vape. As always, I will give you my own, honest opinion of this product after a lengthy testing period.

See The Gate RTA in Action 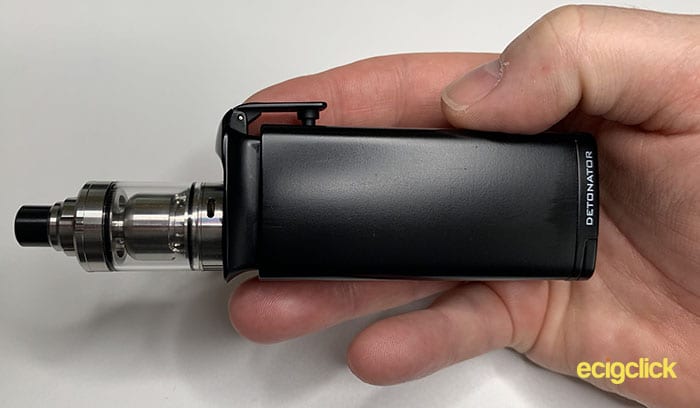 The Ambition Mods Gate RTA is superbly machined and a solid built RTA. The threads run like butter and it all fits very snug. Straight out of the box, there was no residual machine oil, sharp edges or burrs to be seen or felt anywhere. It’s got to be said, this is a nice looking MTL RTA. The deck on the Gate RTA isn’t something we haven’t seen before and is very similar to the Expromizer V4 but the important thing is it works very well indeed and is super easy to build on.

You only have a small amount of space to place your coil and cotton and can get a little fiddly though that’s certainly not saying it’s hard to build on.

I’d definitely class this RTA as suitable for vapers new to rebuildables. It is very easy to build on and quite forgiving with the wicking. Throughout my time testing this RTA I haven’t had a single leak. The colour options are a little limited at the moment. You have a choice of two colours, either Black or Stainless Steel. Now, I’m not saying that’s a bad thing, just limited. How Does The Ambition Mods Gate RTA Perform?

I have to be quite honest, I haven’t been “into” MTL RTA’s, that is, until the turn of the year when we have seen an influx of MTL vape options.

I’ve said it before, and I will say it again that hardened MTL users know what they want from a device. There has been so many MTL devices that have looked good on paper that didn’t quite hit the spot and have fallen by the wayside.

There is more than enough customisation from the Gate RTA to suit almost anyone. You can change out the Airflow plug from the bottom of the deck to one that either gives moderate resistance or one that gives you more of a resistance resistance. Pair that together with the multiple bottom airflow options and you are sure on the way to a winner. 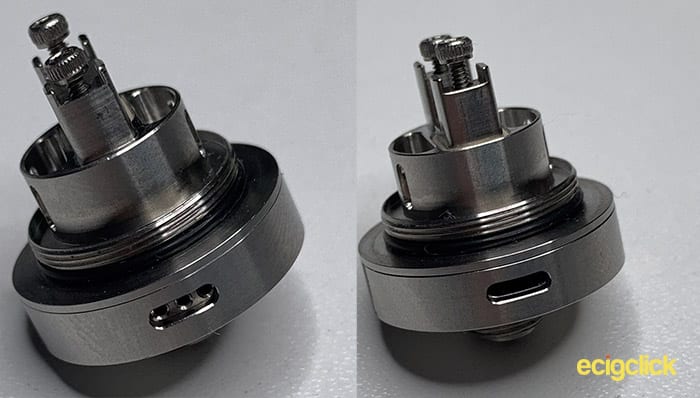 As you can imagine, with the multitude of air intake options available, the Ambition Mods Gate RTA is very versatile indeed. Not only does it offer an excellent MTL vape, the various airflow options allows for a restricted DTL vape. So you certainly do have the best of both worlds.

Ok, another massive plus point for this tank and something you certainly wouldn’t expect from the price point is an adjustable juice flow mechanism. It’s no gimmick either, it works very well and enables you to use vape juice from 50VG/50PG all the way up to a near ‘max VG’ e-liquid. As you can see from the picture above, you have an inner mechanism which, once inserted you are then able to twist and alter the juice flow from the top of the RTA. I can distinguish individual flavour notes from complex e-liquids, there isn’t many an MTL RTA I have come across that you can say that about.

As for cloud, well, this isn’t something you will be getting from the Gate RTA but if you are looking to get one, or have already read this far into the review, I expect you aren’t looking at this RTA for a big cloud chucka.

The deck can be a little fiddly, though that certainly doesn’t equate to difficult, far from it. You won’t get an easier deck to build on, and that, in itself, makes it a superb starting block for beginners. Simply loosen off the two screws on top of the deck and place your coils underneath, tighten up, snip off your excess leg length and get out any hotspots on the coil.

I used a superfine MTL fused Clapton with an inside diameter of 2.5mm and coming out at 1.2ohms.

You need to place the cotton down into the wicking ports on either side. Thin your wick out quite a lot otherwise you may get the odd dry hit or three.

I thinned out the end of the cotton for easier placement and this also enables the cotton to sit nicely inside the wicking ports.

Everyone that knows me, knows how highly I rated the Exvape Expromizer V4.

The race for my personal, go to MTL RTA could not have been any closer. Since publishing my YouTube review and vaping some more on the Ambition Mods Gate RTA, it is literally neck and neck. I would highly recommend you go out and buy this RTA should you be on the look out for a top notch MTL RTA.