Introduction – The .Blank RDA by AsMODus

When Jonny first told me that he’d earmarked me to review the latest AsMODus .Blank RDA I was pretty excited. Firstly, I’m a big fan of AsMODus products.

My all-time favourite mod is my AsMODus Luna stabwood squonk mod, a single 18650 pocket friendly device which looks sooo sexy…love it so much I’ve got two of them! My best buddy also runs an AsMODus mod, the Lustro which he swears by. Secondly I’m a big fan of single coil RDAs, especially for squonking. 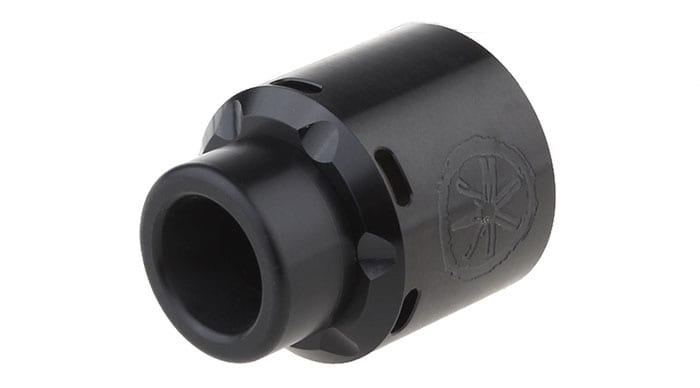 The .Blank however, is a little different to my normal choice of single coil RDAs such as Mike Vapes’ best-selling Recurve or my personal favourite single coiler, the C-Roll by Ambition mods, as rather than being a 22mm, AsMODus have plumped for a 24mm design.

Before we dive in I’ll just address the name of the RDA. AsMODus have been a little cryptic with the actual name. It’s not the Blank or Dot Blank.

The full stop inserted before the Blank is meant to be read as a point…hence the name the Point Blank RDA (so happen to be one of my favourite Bruce Springsteen songs so another tick in the box from me for AsMODus!). Yeah it’s a bit unnecessarily enigmatic but hey ho, it is what it is.

The AsMODus .Blank RDA was sent to me for the purposes of review. My gratitude in no way alters my opinion on it and the views expressed below are my own impressions after a couple of week’s constant use.

AsMODus has a reputation of making high quality kit at a reasonable price point and the .Blank is no exception to this. The RDA comes in AsMODus’s usual “ice puck” designed packaging. To my relief I received the black version (I usually seem to be sent rainbow versions of kit for review…not my first choice of finish). The contents of the box are the usual array of spare O-rings, Allen keys, squonk pin, spare grub screws and a couple of triple fused Oni coils (0.2 ohm). First impressions straight out of the box are pretty good. The RDA is very clean with no machine oil and the finish is excellent with no visible flaws.

Starting at the top, the RDA features an 810 Delrin drip tip. However, this isn’t really a standard tip as it is fitted with a single O-ring so your standard drip tips won’t fit the device. Not a problem for me as I found the included tip to be perfectly comfortable but it’s something to bear in mind for those who prefer to use their own drip tips.

The top cap features six fully adjustable top airflow holes. According to AsMODus the airflow is designed to reduce turbulence and eliminate leaking during reasonable use. Air enters the top inlets and is directed downwards through the posts before turning inwards towards the centre where the air enters the chamber at the bottom of the coil to increase flavour. 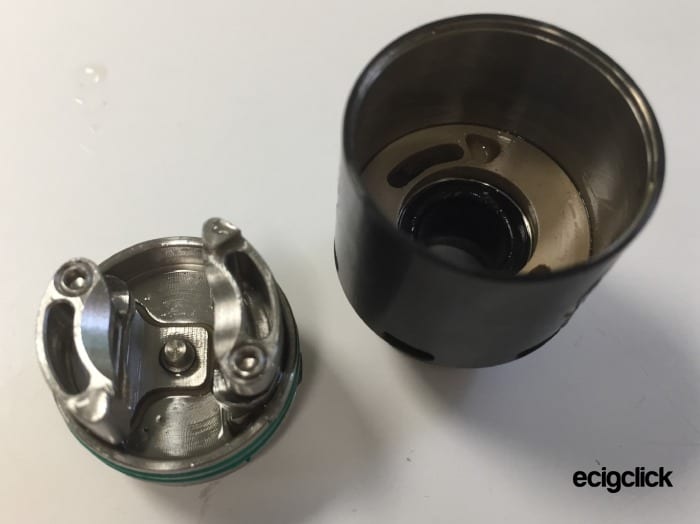 The cap has AsMODus’s wheel logo engraved on both sides. I don’t find the logos particularly intrusive or in your face.

A pair of locking notches are machined into the top cap to lock it into place with the base.

Internally the cap features a PEEK disc which both reduces the size of the chamber and is used for adjusting the airflow.

The build deck is very similar to the one AsMODus used on the Bunker and C4 RDAs consisting of two wall-like posts which the air passes through and also help reduce the size of the chamber to increase flavour. 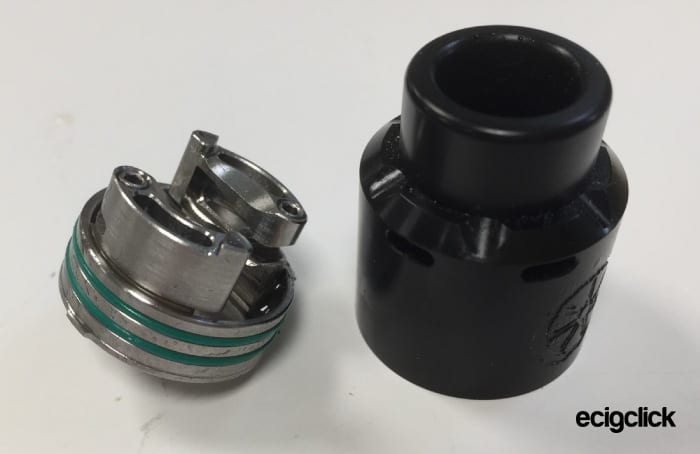 The base of the deep juice well is concave which help direct dripped or squonked juice towards the ends of your wick.

All in all I have absolutely no complaints as regards the build quality and the design of the .Blank. The quality is spot on and the design both simple and effective.

How Does The Asmodus .Blank Perform?

Building on the .Blank

Building on the Point Blank RDA is an absolute breeze. I used one of the included triple core coils. The design allows you to trim the coils once they are installed so there’s no need to second guess the leg length. The deck is nothing we haven’t seen before and is very similar to many other single coil RDAs such as the Entheon but if it works why change it? 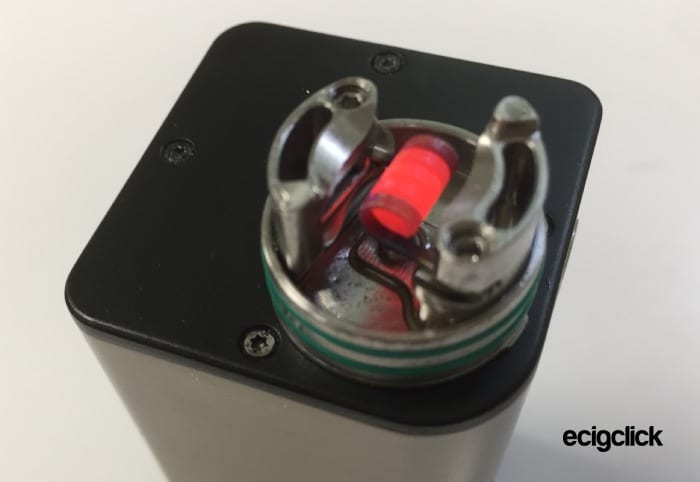 Wicking is equally simple. Just feed a length of wick through the coil, chop to length (a few mm over the width of the deck) and using your tweezers feed it down into the deck. I really don’t think you could have a more simple build deck that the one featured on the .Blank and I would have no hesitation recommending it for a newcomer to building.

Vaping on the .Blank

I mainly used the .Blank in squonk mode, however, I can’t see any differences to using it as a dripper. 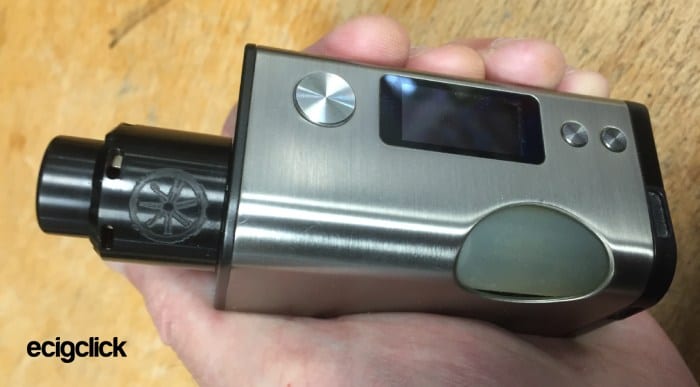 I ran the 0.2 ohm coil (actually comes in at 0.25 ohm according to my mod) at the Devil’s wattage of 66.6 watts and filled up my squonk bottle with my all-time favourite juice, Ruthless Grape Drank. The squonk action is perfect with the concave deck allowing the wicks to saturate very quickly.

Flavour is pretty much perfect and as good as any other RDA I’ve tried…rich and full of depth. For me personally the airflow fully open was a little too airy, very Goon like if that’s you thing.

I closed the airflow to around half way and found that this offered a more restricted pull with a slight increase in flavour with no great effect on cloud production. Single coil RDAs are never going to be absolute cloud beasts but the production on the .Blank is perfectly respectable.

The .Blank isn’t a particularly noisy RDA but isn’t the quietest either. However, there were no whistles at any airflow setting. Overall the airflow is very smooth with no sign of any significant turbulence.

When it comes to squonking, the Asmodus .Blank RDA really is pretty much leak-proof. Yes you can make it leak but you really do have to try to do so. I don’t think I had a single case of leaking in two weeks constant use.

The top airflow directed down inside the internal walls gives you the benefits of a side airflow device but without the leaking issues both with squonking or dripping.

I’m trying not to make this review a complete gush-fest but I guess by now it’s no secret that I absolutely love the .Blank.

I really like the simplicity of the design and really can’t fault the ease of build and the flavour production.  Yes there are far better RDAs for cloud production but if that’s your thing then you’re better off looking at dual coil RDAs.

The only real flaw, which wasn’t an issue for me but I understand that others may disagree, was the choice of the drip tip with the O-ring on rather than the O-ring being built into the deck.

The included drip tip is a little tall compared with my usual choice but to be honest after a day or so of usage I really didn’t notice.

Squonking on the .Blank is a dream. It really is pretty leak proof unless you have the hands of the Hulk.

I was a little puzzled why AsMODus designed the .Blank as a 24mm single coil rather than the more conventional 22mm single coil design. However, with the PEEK airflow at the top of the cap and the airflow walls either side reducing the internal chamber size, there really wasn’t any effect on flavour production and to be honest it looks more in proportion size-wise on my Basium than a 22mm does.

Ease of build makes the .Blank a great introduction to rebuildables for any newcomer and there’s a reasonable amount of room on the deck to fit a larger diameter coil if you so wish.

Would I buy the Asmodus .Blank RDA if I lost the one I have? You bet I would, it hasn’t left my Basium since I received it and has replaced my favourite RDA, the BTFC, as my daily RDA.