The mod died a month after this review was published – the leaking tank and subsequent liquid ingress killed it. RIP Tessera was lovely spending time with you.

The Eleaf Tessera is an internal battery mod which comes with the Ello TS tank.

The mod and tank are based on a Tile style pattern which is where the name Tessera comes from – “Tessera” means a tile which is part of a mosaic.

With a maximum output of 150W and a 3400mAh internal battery this is all the power you will need for most tanks.

This comes with a huge 1.45inch colour TFT display nestled into the angled loveliness of the front of the mod.

On the marketing guff Eleaf say this is a “low Poly Design”. I am slightly baffled by this but a quick search shows it relates to the design process.

There are 5 beautiful colours to choose from – Black, Red, Silver, Green and Dazzling (rainbow).

Will this little stunner be beautiful inside and out? Let’s crack on and find out! 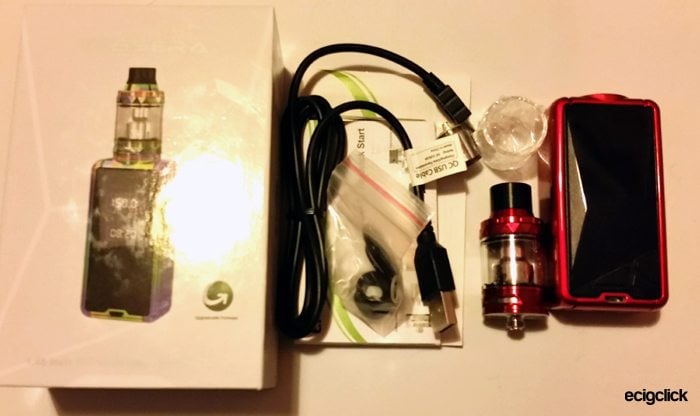 I think the photos say it all – what a beautiful looking bit of kit this is. In fact my photos don’t actually do this the justice it deserves it really is a lovely looking set up. I received the Eleaf Tessera in the red version with the 4ml Eleaf Ello TS tank. However in the EU the 2ml tank will be supplied.

The red shiny metallic body then has black panels on the front and back with angled tile style forms. The screen is nestled into the large clear part on the front. 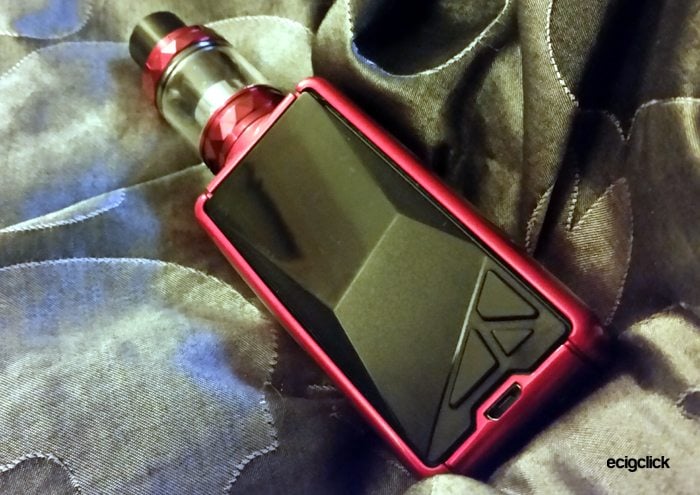 The metallic body feels rugged and tough and although there are plastic front and rear panels they do not feel cheap or tacky at all. The back panel is a matt black finish and it is the same on the front apart from the screen area. Due to a leak this is already awash with fingerprints. It is a forensic labs dream!

This is super light, I have a suspicion after looking through the menu at the “Info” section this has 2 separate internal batteries as there are 2 battery voltage values shown. However this feels way lighter than a dual 18650 mod. I am comparing the weight to the Wismec Sinuous P80 which is a single 18650 mod and this feels to be the same weight as the Tessera. There is a centralised 510 connector but this does have a platform so the maximum tank size you could realistically use is 25mm diameter – which I think the Ello TS is. I tried a few other tanks on here which were 25mm and they fitted the platform exactly. Any bigger and the tank will overhang the platform. The specs say the mod is 30mm wide but that does include all the angled pointy bits on the back and front. 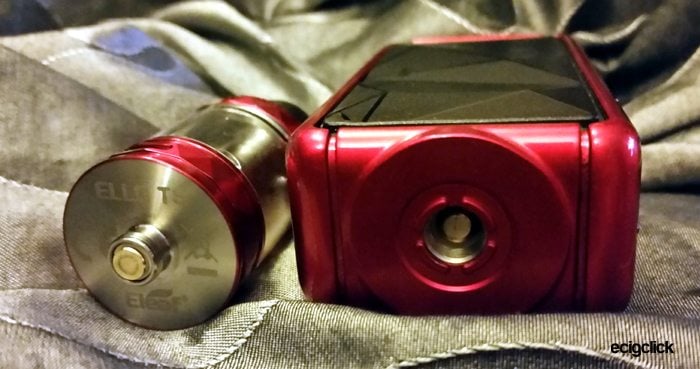 Give the beautiful Tessera a shake and not a wobble or rattle in sight.

The whole side of the mod is the fire bar which is sturdy and responsive.

The screen has this odd angle to it but the display is fully square and lovely and clear.

The adjustment buttons confused me initially as you have up down and a menu/confirm style button too. But in practice once you get used to them these are great to use. You have a real time clock and the date on this too which is lovely for someone like me who often forgets what bloody day it is.

You can customise the colours of the display too.

If you get any issues there is also a reset button on the base of the mod. Sounds silly but with a removable battery mod if you had any issues you just take the battery out – but with a fixed battery mod you can’t so this does make sense – thankfully haven’t had to test this yet though!

The tank is just as stunning, the metallic top and base have the triangular pattern machining which just catch the light beautifully like a gem stone. 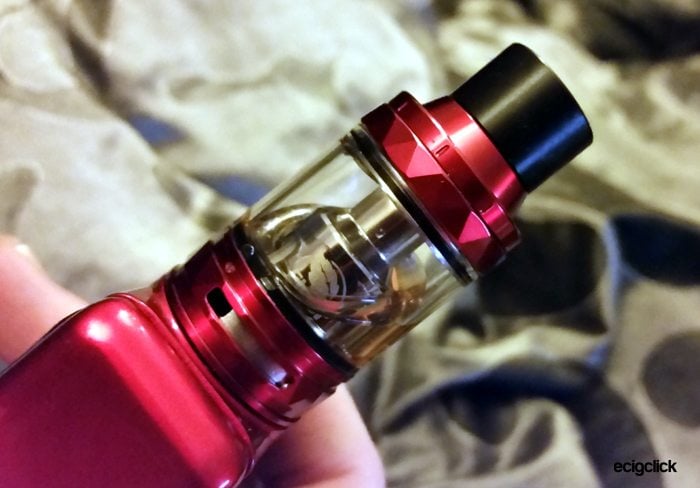 The metallic red on the tank matches the mod perfectly.

A black plastic drip tip doesn’t look strange or cheap and like the Melo 4 tank its perfect size for this. I just can’t emphasise enough how amazing this is to look at, it’s a real joy! 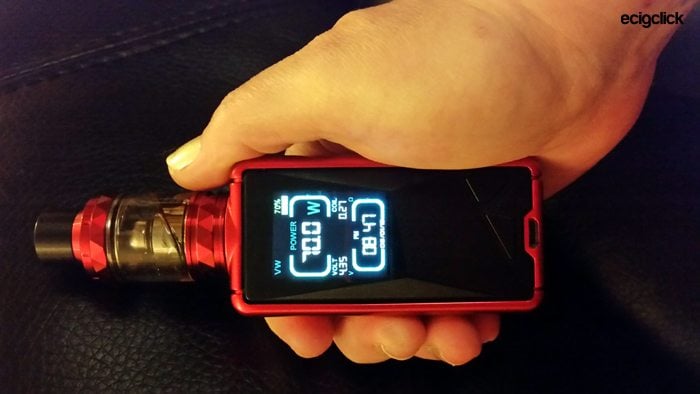 How Does the Eleaf Tessera & Ello TS Kit Perform?

As this tank is a Sub Ohm tank you will need to choose your E-liquid appropriately!

For instance – sub ohm kit you can get away with lower nicotine strengths as this is more powerful. Anything higher than 6mg nic will be pretty revolting.

Also you will need E-liquid with a higher VG than PG content. But don’t worry we have a guide to all things VG and PG to help!

I used my usual 80% VG with 6mg nicotine E-liquid.

When in the menu use the up and down buttons to cycle around the sub menus and the confirm button to select.

To exit the menu press the fire button.

Lovely lovely menu system and the confirm button is a wonderful addition and really useful and intuitive.

How To Charge The Eleaf Tessera

This has an internal battery so charging is super simple.

Like the iStick Melo mod which I reviewed there is a temperature safety control – basically if you switch this on (ENU in the menu) if the mod temperature exceeds the limits whilst charging it will cut off. This has the capability for fast charging at 2A however if you are like me and using a PC or laptop with older USB connections you usually will not get much more than a quarter of that – so don’t blame the mod if it does take a while to charge – not all USB ports can output 2A.

The only other thing to do with the tank is to adjust the airflow to your preference using the airflow ring on the base of the tank.

I found with the supplied coils this was a really open airy tank and I am usually a Direct to Lung (DTL) vaper who likes a restricted airflow so I was closing the airflow ring down a lot.

How To Fill The Eleaf Ello TS Tank 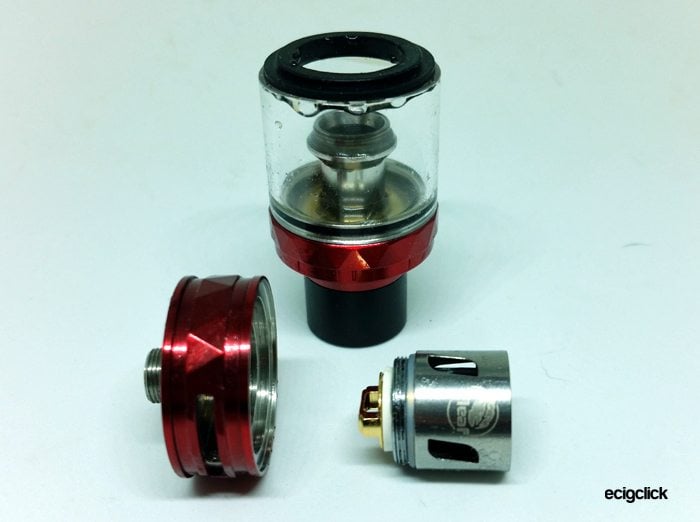 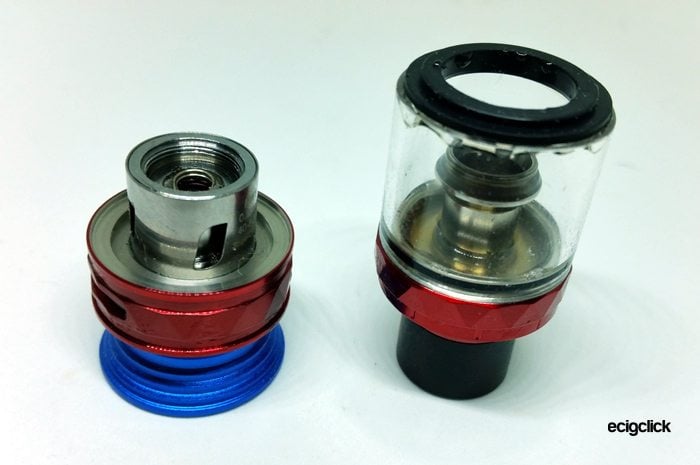 When you remove the bottom of the tank the coil head can stay attached to the chimney area. You can’t unscrew or pull on it as the copper contact just pulls out. I ended up having to use Pipe Grip pliers to try and grab the small bit of coil body I could and unscrew it from the chimney. Not cool! In the box is a handy guide to the best power settings for each type of coil which is really useful. So if you are using that coil for the first time it is best to set at the lower power limit until the coil is fully absorbing e-liquid then up the wattage as you desire. This was already installed in the tank so I put some liquid in left it to soak and away I went.

This is a super airy coil, not much flavour but lots of vapour. I found myself closing down the airflow adjustment a lot on this and went up to 70W to try and get some taste.

A few hours later returning to this I wondered how that coil had soaked up a tank of e-liquid. However when I picked up the Tessera and found a big puddle of e-liquid I knew where it had all gone. I put a bit more liquid in and It was literally weeing itself through the tank airflow holes. I took the tank apart to make sure the coil was tight – which it was and screwed everything back up tight and risked a refill.

By now me, my desk and the Tessera were covered in e-liquid.

However I do think that the leak is cured, something must not have been screwed up tight enough and I trusted this out of the box – I should have gone round and checked it all.

Shelly’s lesson of the day – when you get a new tank make sure everything is screwed together! I don’t mean tighten everything until your knuckles turn white however just give things a bit of a grip and turn to make sure they are how they should be before risking 4ml of liquid!

After the leakage debacle and the third tank fill up the flavour is starting come through.

I was initially disappointed with the taste with this coil as Eleaf usually nail flavour and vapour – the Melo 4 tank was incredible.

The HW2 is a dual coil 0.3ohm head and at 70W I am enjoying this more now. I still have the airflow only open about a quarter but the flavour is coming through a bit more.

The HW1 coil is a single coil head which is 0.2ohm resistance. It is recommended for 40-80W.

At 60W this is good vapour but a bit of spit back. I have gone up to 70W and still not much more flavour performance. At 75W my tongue is burning from the spit back sadly. At 80W just hot vapour, spit and not much flavour. Sorry.

There is a good vapour from this but not enjoying this really. It’s bearable at 60W.

This tank is again is guzzling up the E-liquid like a thirsty person who has just eaten a hot chilli.

Still not as much flavour as the Melo 4 tank has.

I tested the battery life with the HW1 coil head which is 0.2ohm at 60W. I got 6 hours of very heavy vaping on this!

The Eleaf Tessera kit is even prettier in the flesh.

Not a beginner kit as the 0.2 and 0.3 ohm coils would probably blow a smokers lungs out but as an intermediate kit is where it sits in the market.

The vape mod itself is a 10 out of 10 all day long. Yes I would pay my own money for this mod.

The Tessera mod is so easy to use and no messing with batteries etc. – ideal out and about mod too. Definitely a conversation starter when people see it.

The tank on the other hand not so great, quite frankly, leaky, poor flavour and getting the coil head out was harder than it ever should be.

Sorry but I really dislike the Ello TS tank – the Melo 4 tank I reviewed was much better for flavour and way more reliable I found.

After I had written this review and sat to take some photos – the second the tank goes from being upright again more E-liquid everywhere, this isn’t good at all.

The points in my review score would have been 100% if this was just for the mod.

If the Tessera came with the Melo 4 tank this would blow the competition away it really would!

A month after this review was published the Tessera Mod has now died. Will not turn on or reset. It would appear two tankfulls of E-liquid leaking out of the Ello TS tank has killed the mod – very very sad as the mod is lovely.