The world of weed gets ever more wild and wonderful – welcome to the Eyce Mold 2.0. This is for CBD, cannabis and herb users only, and preferably those with a penchant for the unique. It’s a reusable ice bong mold.

Let me break that down for you: it’s a silicon mold you fill with water, stick in the freezer then use as you would a standard bong (or ‘water pipe’ to give it its grown-up name). 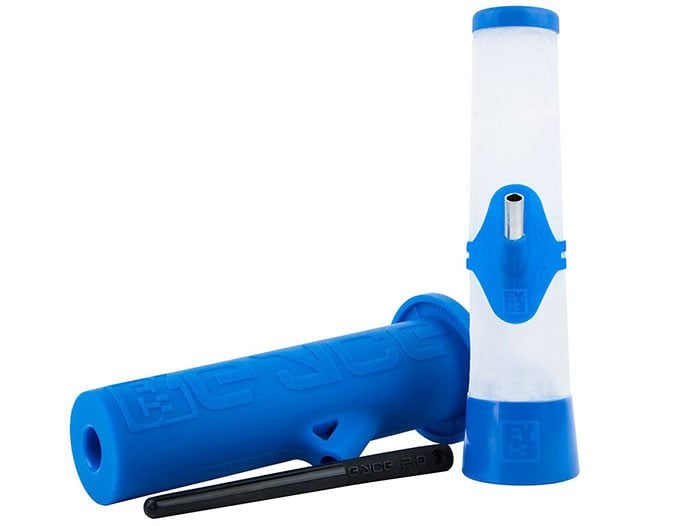 One of the biggest annoyances about using glass bongs is their tendency to smash when knocked over – something all too easy during a heavy session. The Eyce mold removes that problem entirely. If you do manage to smash the (impressively sturdy) ice chamber, no big deal, just freeze another one.

Another problem bong users will know well is that glass bongs simply don’t stand the test of time. The material becomes stained and murky and takes on the dreaded ‘bong pong’ over time. Sure, you could wash and disinfect it after every blaze-up but really, who has time for that? Again, Eyce solves this issue, and more.

There’s nothing else quite like this on the market, so in this review we’ll look at how it matches up to bongs in general.

This item was sent to me for the purposes of review, direct from Eyce. All views and opinions are my own. There are a number of serious advantages over standard bongs. Here are the most relevant:

Smoothness: The bong is made of ice so naturally the smoke that goes through it is ice cold too. This means a fantastically smooth throat hit – no more burning, coughing and heat irritation. The boffins among us will appreciate the fact that the smoke reaches minus 3 degrees celsius.

Unique: Sure, it’s an original idea but it isn’t just a novelty item you’ll use once and put away. The design means it has a tangible effect on the smoke you inhale, and if you prefer it to the standard bong hit it’s well worth the extra effort.

Safe: This bong won’t shatter if you knock it over. This means no more smelly bong water on your carpet, and no paranoia-inducing shards of glass waiting to be stood on. And to sound like your dad for a moment, what price peace of mind?

If you’ve ever owned a bong, you’ll know the upkeep on it can be like owning a small pet. It needs cleaning regularly to keep it clean and pleasant to use, and even then stains and stinks become ingrained on it over time. The Eyce set-up cuts this down dramatically – all you need to clean is the mouth piece and down stem.

No bones about it, the Eyce 2.0 is a great looking piece of kit. Of course, in the package it’s little more than a few pieces of silicon and a metal tube, but when you open the freezer and pull out the finished product – the ice cold Eyce pipe, steaming away like something from Indiana Jones’s Ark of the Covenant, you’ll blow your friend’s tiny minds. Trust me. The concept behind it is impressively forward-thinking, to the point where it’s surprising no one has thought of this before. Making a bong safer by replacing glass with ice, and producing a smoother hit in the process. It’s impressive stuff.

How Does The Eyce 2.0 Perform?

Obviously, it needs a bit of preparation but filling up a mold with water and sticking it in the freezer is hardly the most arduous task. For best results, take the mold-free frozen water pipe and return it to the freezer for a few minutes. The smoke it produces from your herb is ice-cold, like the first time you tried a menthol cigarette – but with a few hundred less toxins (assuming you’re hitting straight herb).

The melting can be an issue, although this is less of an issue for us UK-users, but you can expect it to last a couple of hours before it needs ditching. Easily long enough for a decent session. It’s limited to herb, and you’ll need to provide your own bowl, which is a bit of an oversight, though most seasoned herb-lovers have their own favoured bowl, so it’s simply a case of slotting it on and filling with your preferred choice of greenery.

There are a lot of advantages but there are three stand out factors when it comes to using the Eyce water-pipe. First, the ice cold hit is like nothing else. Those gnarly, throat-burning coughing fits are a thing of the past – this is smooth and sleek.

Second, the level of maintenance is nothing compared to the standard water pipe. It’s safer, cleaner and you won’t have a smelly old bong lying around anymore. Finally, quite simply, it looks awesome.

The preparation process is a bit tedious, but it really isn’t a big deal. Fill up the silicon mold with water, tap it a few times to get rid of bubbles, then stick in the freezer. And that’s it.

Fans of elongated smoking sessions might want it to last longer before melting, though this varies according to ambient temperature – an easy solution is buy two Eyce molds and have the other one waiting in the freezer.

The lack of a bowl is mildly annoying, but the pipe is compatible with most standard types so it’s just a case of slotting your favourite on.

Eyce have created something pretty special. More than just a gimmick, it actually solves a number of problems inherent to bongs and opens the water-pipe market to a whole new set of people. It’s safe, provides a better quality hit and looks great. What more could you want? Davinci IQ Vaporizer Review – An Extremely ‘High’ End Device So Is It Worth Your Hard Earned ‘Green’ ?