To Squonk or not to Squonk that is the question!

Be it nobler to drip your liquid or to squeeze the bottle and risk a flood! Today we are looking at the highly anticipate Geekvape Athena Squonk mod. GeekVape don’t really need an introduction as they are among one of the most well know manufactures on today’s vaping scene.

With product such as the hard as nails Aegis X kit, the Tsunami Mech Kit, the Karma Mech, the Peerless RDTA and RDA, the Griffin RTA, Tsunami 24 RDA, and the Avocado Genesis.

The Athena Squonk Kit by Geekvape

Today we are going to take an up and close look at GeekVape’s newest mechanical Squonk mod and its accompanying BF RDA. Does it beat down the best squonk mods on offer? Let’s see what the fuss is about.

*This is an unregulated mechanical box mod, and therefore knowledge of ohms law and battery safety would be advised. The main part of the mod is made from stainless steel while the magnetized doors are made of Aluminium. One door has a hole to allow the squeezing of the bottle, and the other door when removed reveals a space in the body of the mod to help you push your battery out. The liquid bottles that come supplied are of a 6.5ml capacity, one is made of a silicon gel and the other is made from a PVC plastic. The internal metal work is made of stainless steel with silver plated battery contact points.

The box over all is built to a high standard with the excellent quality we have come to expect from Geekvape. Being a mech box you have a side fire button, and a unique large safety lock switch to prevent accidental firing.

The 510 squonk connection point is slightly raised from the deck. The Decorative details include a hex like pattern on both doors, and the Athena logo (under the slide lock) is rather reminiscent of the Masonic symbol to me! The 510 connection plate has a pattern rather like capital T’s joined together, Along one side of the box you will see the word ATHENA lightly engraved and the box has chamfered edging making for a nice detail. The RDA disassembles into 3 parts Base and Build Deck

The RDA is of a post-less design that is raised up a little from the base allowing plenty of room for your cotton and e-liquid. The positive post sits above the peek insulator. The gold plated 510 connection pin is a squonk pin, in the baggy of extras you will find an ordinary 510 pin and although it looks like a squonk pin the hole does not go all the way through the pin. Are press fit together the only way to get them apart would be to destroy the top cap! On the inside of the cap you have two protuberances to help seat the cap properly to the base. The air flow is of a dual cylon design what you set one side is mirrored on the opposite. The airflow is at the top of the RDA and is very easy to set in which ever position suits your vaping style.

The cap has the Athena logo, in situating the airflow where it is the airflow hits the sides of your coils.

The pre installed 810 driptip is removable and is an Ultem driptip while in the baggy you will find a 510 adaptor and 510 driptip made from delrin. To squonk the liquid into your RDA simply squeeze the bottle a couple of times vape as normal.

Because I like to see that the squonk is working correctly I leave the cap off while squonking so I can see that the liquid is being soaked up by the cotton correctly.

How Does The GeekVape Athena Squonk Kit Perform?

I have owned squonk mods before but only really cheap ones, the KangerTech Drip box and the Eleaf Pico Squeeze being two, neither of these mods really light a fire for me. In fact, putting them side by side with the Athena Squonker they feel like toys in my hands. Because the Geekvape Athena is a mech I am very aware of ohms law and battery safety while using this setup, so for this example I coiled up a pair of Flapton coils on a 3.5mm bit which resulted in 0.22 ohms. Using a liquid from a local company, Pie Man by Juice Junkies and for a 18650 battery I chose to use a Sony vtc5a.

With the airflow closed to about half the resulting flavour was excellent! Very much what I have become accustomed to from Juice Junkies.

The vapour was good using both straight to lung and mouth to lung vaping styles, STL with the airflow close to half was restricted, with the airflow open wide for STL style the resulting vapour was thick and cloudy, however, the flavour for me did diminish somewhat. No matter how I set the airflow I can state this is one heck of noisy RDA.

One big plus is that you don’t have to use the RDA as a squonker, you can remove the 510 squonk pin and replace it with the supplied 510 pin.

A little caution is needed here as when you do remove the squonk pin the positive post comes away as well so be careful you don’t damage the post or you’ll have a devil of a job replacing the pin!

The battery life was good, I was able to get a good 2 hours vape time on a single Sony vtc5a.

I don’t recommend it but I had to chain vape the device and after about 8 long toots the device and battery started to get warm, not dangerously so, but as I said earlier this is a mech mod.

Putting it down for a while allowed time for the device to cool before using it again.

While tiny in appearance the Athena mod is fairly weighty with a battery installed, the device sits quite comfortably in my hand.

Having the 6.5ml squonk bottles are great, under normal vaping situations I have filled the bottle twice in one day, changing the squonk pin gives the user flexibility of using the RDA on a non squonk device, the bag of spares that come with this device are top notch.

It’s got to be mentioned while I like the liquid capacity of the bottles, the silicon bottle is too soft and I find it takes quite a while after squonking for the bottle to un-press so you can squonk again. Also, the PVC bottle was a touch too hard for my fingers if my hands are playing up which they do normally towards the end of the day.

In addition the squonk space in the front cover I find the hole is a little small for my sausage like fingers, I have adopted taking the cover off to squonk (press the bottle).

I have also found that coming to the end of a bottle of juice the feeder tube doesn’t always suck up the liquid! This I resolved by cutting at a small piece of tube away at a slight angle.

I’d be happy to recommend the Athena to those that what that want to try a reasonably priced squonker, however, while I think is a great starter squonk kit, I’d like to see Geek Vape address the issue of the bottles and possibly the size of the squonk space on the front cover.

Would I buy the Geekvape Athena Squonk kit again should I lose, damaged or have it stolen? No I could live without it. 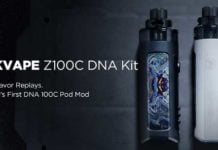