The Heatvape Defender. A New Mini Box Mod With A Slight Difference

Heatvape are a new e cigarette company with a tight selection of products. The Heatvape Defender, which is on review today, was first released in December 2014 and quickly went through a couple of updates resulting in the product that is available today.

It’s based around the Eleaf iStick type of design but has a few interesting features that could make this a mini box MOD that could be worth looking at.

This e cig was purchased by myself for the purposes of this review.

The Heatvape Defender comes in a small perspex case with authenticity scratch label.

The Defender has an impressive 2600 Mah battery with a body design that o first look is similar to the iStick but that is where the similarities end.

The standout feature of this device is the way the threading is designed and set on top of the body. Heatvape have centered the thread so whatever tank you use sits nicely in the middle rather than off to the side.

Not only this but they have designed a twin thread connector that allows you to switch between 510 and EGO fittings easily without the need for an adapter. 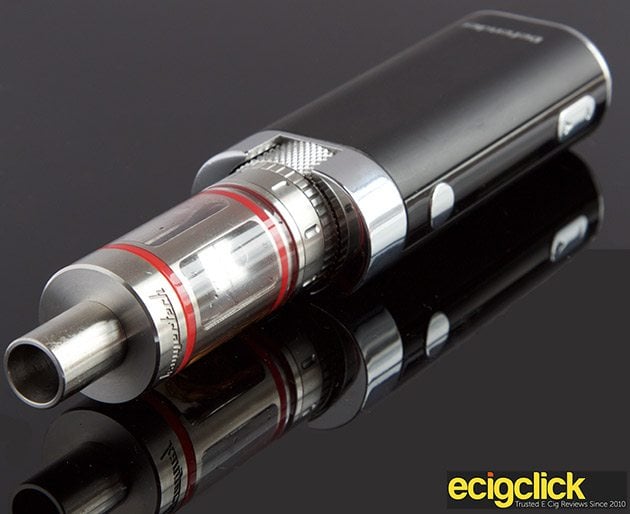 This works by simply unscrewing the connector, flipping it and screwing it back in. This is a fantastic feature and one that seems so simple, it’s one of those ideas where you think ‘why hasn’t this been done before’?

Anyway it has been now and I wouldn’t be surprised if similar version hit the market in the coming year. Very useful if you have both EGO and 510 tanks. The actual finish is very nicely done, the black version I have has a ceramic matte effect finish that feels great in the hand. I has seen previous reviews where the Defenders had a gloss finish that was a fingerprint magnet. This seems to be a much improved addition.

The micro USB charging port is placed on the base of the MOD. It does state in the instructions that it can be used whilst charging as a pass through device but for me this didn’t work. I was having to unplug, take a few drags and then plug back in.

Not sure if it is a one off but as it stands for me this can be a bit of a nuisance.

The main display screen and functions are down the side of the device and set out simply with a power button and +/- selector button. The buttons do have a slight rattle to them which I would think at the stage we have reached with box mods should be a thing of the past with all devices.

The Defender is easy to use with the following functions:

The Heatvape Defender is really simple to use, the only thing that I found to be a bit of an issue is the time it takes to flow through the settings. Keeping the +/- button pressed and then releasing will result in the watts to cycle through the settings automatically which in itself is Ok but there is no accelerator, it ambles though slowly until you reach your desired setting.

This isn’t a huge problem I’ll admit and it will likely not be an issue for many vapers, especially ones with that thing called patience.

Other features: from that everything else was good, the safety features include:

The 2600 mAh battery provides great battery life in such a small device. As a moderate vaper it was easily seeing me through 3 days with a Nautilus Mini on top firing at 11W and around 2 days with the Kanger Subtank Mini working at 20W.

It will of course vary depending on the atomiser resistance you are using as well as your vaping habits but even the heaviest of vapers should get a good return from this.

The twin threading on the Defender is the standout feature and one I think is a clever bit of design, doing away with the need for adaptors. The build and feel is great as is the battery life. I was disappointed at the slow volts/wattage selection and the fact that the pass through feature didn’t work for me.

The Defender had no issues working with a number of tanks I tried. The Nautilus Mini performed as you would expect and sub ohm vaping with both the SMOK VCT and Subtank worked well, again as expected.

It has to be said the Subtank Mini from Kangertech fits perfectly on top of this and looks great without looking too oversized. With numerous box mods hitting the market the 25W maximum may not seem all that impressive but for me personally it is more than enough. I tend to vape around the 20W mark when using sub-ohm tanks with a 0.5 Ohm coil.

Obviously this will again depend on what you will be vaping with but for vapers that are new to box mods this will provide plenty of power and options to give top results. Overall – Handled the subtanks with a 0.5 Ohm coil with ease and worked perfectly with ‘standard’ tanks such as the Nautilus mini and Aerotank.

I think the centered tank on the Heatvape Defender looks great and definitely a change in terms of looks from most box mods out there.

Would be a good bit of kit for vapers buying a box mod for the first time or more experienced vapers looking for a more compact device that packs plenty of power.

Here is a summary of the above review: