When it comes to iJoy, I really don’t have too much to say, apart from, yes, they’ve been around for a long while and made some decent kits, but there’s just nothing that really comes to mind that’s been ground-breaking or different. I suppose some folks will say they live by their iJoy Avenger mod, or maybe the Shogun Univ which was certainly a popular variant.

For me, my only experience with an iJoy product was with the iJoy Lunar, a pod system with a glass body, nicely styled and performed pretty well.

The original iJoy Captain was released in a few different forms.

Its been around a year however, since the last Captain variant was released, so its fair enough that they’ve gone back to the drawing board, and came back with the iJoy Captain 2 kit.

What Can We Expect From the iJoy Captain V2 Kit?

The iJoy Captain 2 kit is certainly a refreshed model, sure it has similarities to the original Captain models, with a large side positioned fire button and similar screen and adjustment button style.

However, with the Captain V2 mod, they’ve given the device a bullet-proof jacket in the form of thick rubber, Zinc Alloy frame and squidgy leather sections. They’ve also stuck with Dual 18650 rather than looking at the larger, and becoming more popular 21700 battery.

The tank that comes with the kit is the Captain 5 tank. Now I wont lie… I’m not quite sure what Captain 1 through 4 looked like, or even performed like, so this tank is all new to me. The tank makes use of a number of ranges of coils including the X3, DM and Mesh Coil Range. 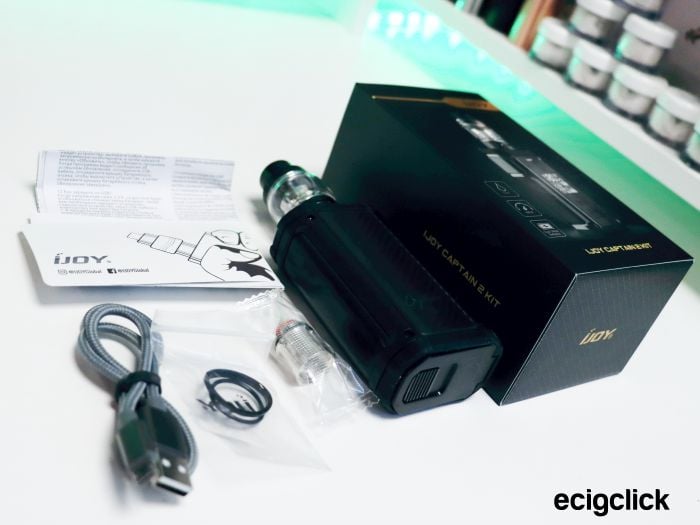 The mod comes in a small number of colours and the tank included will match the colour of the device, no resin this time round. I received the Black variant of the iJoy Captain V2 kit. A proper stealthy looking device with an almost Matte Black finish on the tank, very SWAT style – I like it.

The 810 drip tip on top is very generic but isn’t smooth or rounded at the top, meaning you can feel it on your lips.

Also if you plan on using your own 810 drip tips you’ll have to make sure they have their own O-Rings as the top cap does not have its own O-ring inside.

There are also some nice simple, elegant branding on the top cap as well, not over the top, just simple and smart.

The Captain V tank will come with a 2ml straight glass, and if your lucky or not in TPD areas, you can also enjoy a 5ml bubble glass. Once removed, there are 2 large kidney shaped filling ports.

iJoy Captain V2 the Base:

The base has the usual branding and some unusual batch numbers. A centred 510 connection up top is ideal for any atomizer up to around 32mm which is always a bonus.

The ijoy Captain V Tank that comes with the kit suits the device perfectly in my opinion. But of course you could use your own tanks.

However the smaller the tank or RBA, the sillier it will look.

Under a sneaky rubber flap is a Micro USB port for firmware upgrades and also can charge at 1.5Amps, but of course I will always recommend you charge your 18650 batteries externally.

The face of the device is where you find a large, square display but unusually it doesn’t fill as much space is it could, a bit like mounting an iPad in the centre of a large wall.

It looks a little odd, and they could quite easily increase the screen size. Nonetheless the display is simple, bright and clear and shows absolutely everything you might need to know. BUT IS IMPOSSIBLE TO PHOTOGRAPH

Below the display is 2 small Left and Right buttons for your adjustment.

The fire button is positioned on the side of the device and is probably the largest fire button I’ve ever used, but its curved nicely and comfortable to fire.

The iJoy Captain V2 Mod makes use of one of my favourite styles of battery door, with a large unlocking latch to lever the battery like a traditional door. The inside of the door is coated in a thick rubber like the rest of the device, so its clearly built to last.

The iJoy Captain V2 mod stands quite tall and is mostly covered in the ‘Geekvape Aegis Legend‘ style rubber, with a Zinc Alloy frame and 2 large leather feeling panels on either side.

Interestingly, as much as this device appears to be one of the IP67 rated, Shockproof, waterproof, dustproof mods, it doesn’t actually state any IP rating, only that it uses Military grade materials. I cant be 100% sure the iJoy Captain V2 mod is capable of being dropped in water and thrown around. It certainly looks like it could handle a beating, but iJoy just hasn’t stated the IP rating to prove it…Weird.

The Captain V2 mod is a big chunky device which I really like the look, and the feel of, with the added bonus of housing a large atomizer if you so wish.

Regardless of not having an official IP rating of any sort, I’m pretty sure the iJoy Captain V2 mod could take a beating no problem. It just feels solid and designed to last.

iJoy Captain 2 In The Hand

The iJoy Captain V2 kit, loaded up with a tank full of e-liquid and a pair of 18650 batteries is not light!

But in the hand it feels like you’re holding something pricey and substantial. Certainly not a pocket friendly portable system, but you certainly feel confident in its strength and build quality. As a thumb, or finger firer it is very comfortable to hold and use thanks to the leather feeling panels on either end. So an ideal device if you tent to flip between thumb and finger firing.

The iJoy Captain 2 kit comes with the X3-Mesh and the X3-C1 coil.

I thought round-wire was dead in stock coils? The X3-Mesh Coil is rated at 0.15Ω and recommended wattage of 40-90w which is extremely vague. There are also a range of other coils that are compatible with the Captain V tank along with an RBA: How Does the iJoy Captain 2 Kit perform? There are a  small number of button sequences to remember to operate this device:

Three clicks of the fire button and you’re shown 4 Squares and a Rectangle. Yep…but each box will open up another level of options.

Note – The display has been almost impossible to photograph. So apologies for lack of images of the menu.

Clicking on this option will a lot you to set your power Output between Normal, Hard, Soft and also created your own Power Curve which is actually very simple, especially if you like a boost at the start of your vape.

Clicking on this option will allot you to choose your Temperature Control Material from Nickel, Titanium, Stainless Steel and also two M Options (M1/M2)

Within the TCR mode you can customize your temperature control coils for the M1 and M2 options in T Mode.

Clicking on this option will allow you to change your screen Cut-Off Time between 10 Seconds, 30 seconds, 60 seconds and 90 seconds.

Exactly as it says.

For the duration of my testing, I was vaping on Code Red by Darkstar, it’s my all day vape and I know this e-liquid so well I have a very good gauge on how well it performs on any atomiser. Historically however, it doesn’t seem to come through very well on sub-ohm tanks.

But at an unusual 77.8 Watts I enjoyed this coil, especially with the airflow wide open.

If the airflow feels a little loose wide open, dropping it down half way and vaping at 60 watts is also comfortable. The flavour from this coil is very good. Not the best flavour I’ve had from a sub-ohm mesh coil but its more than acceptable.

Did I mention this tank chucks clouds!

A glorious plume of vapour will escape as you exhale – joyous, smooth and thick.

As a traditional round-wire coil, I wasn’t expecting a great deal from the 0.4Ω X3-C1 coil., but It didn’t do a bad job.

At 60 watts I was more than happy, at that wattage with the airflow wide open you get a slightly warm vape and a decent cloud. The X3-C1 coil didn’t perform flavour-wise as well as the mesh coil, but its decent enough considering round-wire coils are a little ‘old school’ for sub ohm Tanks nowadays.

Regardless of how you like your restriction, the airflow is smooth on the iJoy Captain V tank, but a little noisy, not noisy like turbulent or like a whistle, just a bit on the loud side. Unless you’re ploughing through loads of e-liquid at 90 watts, you should see the dual 18650 batteries lasting you a full day. But obviously that really depends on how much you vape. If around 300 Puffs at 65-75 watts is your style (Like Me) You’ll be fine for a days battery life. Unless of course you’re using 5 year old batteries which have never had a proper charge cycle.

It’s listed as ‘Dustproof & Shockproof’ yet they haven’t mentioned any rating. Meaning I wasn’t 100% comfortable giving the iJoy Captain 2 Mod a bit of a beating. However, I may or may not have accidentally dropped this device a few times onto a tiled floor, and each time it has bounced back and worked no problem.

Without having the ideal IP ratings doesn’t really make a difference to the fact that the iJoy Captain 2 Mod feels extremely durable and hard wearing and even if it was to be dropped in a puddle, I’m pretty sure it will cope.

The iJoy Captain 2 Kit unfortunately is ‘Just Another Kit‘ in essence.

Yes its well made, simply styled and fairly comfortable to use day to day.

But, it is on the large size so if portability and convenience is key for you, then I feel the iJoy Captain 2 Kit may be a little too much to manage day to day.

The Captain V Sub-Ohm Tank is definitely on the larger size, with a 28mm Diameter it’ certainly n the bigger side. But I really like the simple style to it with no bling but decent flavour and a steam train in the vapour production category.

So the 3 big questions I ask when testing a product are:

Obviously the tank may not last as well.

But regardless of not having the usual expected IP67 rating, the mMod is solid and a joy to use.

The X3 coils have performed very well during my testing and although the X3-Mesh is my preferred, both coils perform well with regards to flavour and vapour production, especially if you enjoy a nice loose Direct Lung Vape.

Is the iJoy Captain 2 Kit versatile enough to suit a new and experienced vapers?

The iJoy Captain 2 Kit certainly wouldn’t be recommended for a new vaper.

Did you buy the iJoy Captain 2 kit? Or have you tried it?

Let us know what your thoughts or any questions in the comments below.