A revisit of the JUUL pods review, and this time I’m also reviewing the new Rich Tobacco flavour pod which is exclusive to the UK market. Despite those huge sales, the company has been dogged by controversy from both members of the wider vape community and indeed politicians and anti-vape groups.

It’s fair to say JUUL was targeted rightly or wrongly for being the catalyst for the so called US teen vape epidemic – something more in the minds of those rabid soccer mom anti-vaping groups and virtue signaling politicians than actual fact.

JUUL recently announced plans to throttle back its workforce and presence in some parts of the world, however it is firmly committed to the UK market.

Indeed it’s so committed to the UK vape market, JUUL pods are available from Sainsbury’s and Tesco – two of this country’s largest supermarket chains – as I said the company isn’t about to quit these shores anytime soon.

OK, enough of the politics and onto the JUUL pods taste test and in particular the UK only Rich Tobacco.

As stated, I thought I’d do a quick update on all of the JUUL pods available here in the UK.

They are nicotine based flavours with containing 0.7mls of nicotine salt e-liquid with a choice of 9mg or 18mg nic strength.

Please remember, taste is subjective, so what I may like/dislike may be the opposite for you.

OK, the aroma definitely shouts strong tobacco with a kind of nuttiness to the back note.

The inhale delivers a decent tobacco taste with that dryness I enjoy.

The flavour actually holds right to the back of the throat where despite being nic salts, the tonsils do get a gentle tickle.

Not quite a throat hit, but definitely a little scratchiness.

The flavour just about holds its own on the exhale delivering a not quite mild and not quite strong tobacco flavour.

I think the word ‘rich‘ is maybe pushing it a little, just a tad though, as its not that generous in depth.

However, of all the JUUL pods on sale in the UK, this one is by far the tastiest I’ve tried by a country mile. I said in my original review – think a much milder Silk Cut if you ever smoked those.

Sure I’m getting a smell and the taste of tobacco – just not strong enough for me I’m afraid.

What I will say is this one’s ideal for those newer vapers that don’t like overpowering flavours. Yes it’s refreshing and yeah there’s a hint of mint.

However once again the flavour whilst not actually muted – is a little low key.

If you’re looking for a shuddering brain freeze – this one isn’t it.

It’s a sweet mint for sure – more Polo then Extra Strong. 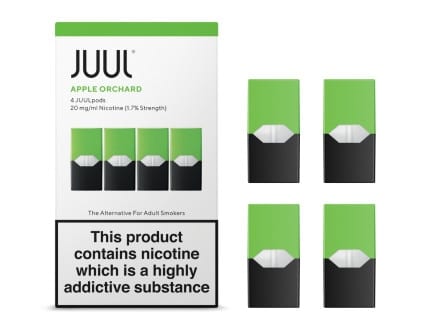 The stunning smell promises much – you can even feel the apple juice on your chin.

In the first review I said you get so much promise of flavour on the inhale but it kind of melts away.

I stand by that because this flavour in particular is very frustrating and I find myself puffing on it more to get that hit of apple. Again with the dare I say washed out flavour.

I said in the original review it tastes like a watered down mango fruit squash and sadly that’s still the case.

Why muzzle the mango is my question?

It’s a vibrant sharp and tangy fruit that needs to speak for itself. 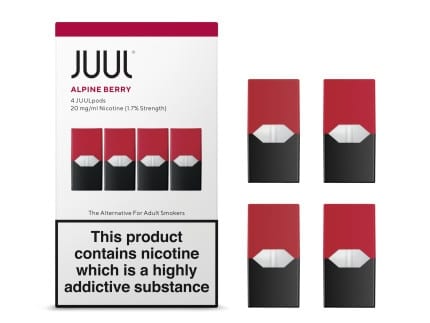 Another flavour that is so close to being delicious it’s untrue.

The smell once again promises great things as does the first split second of inhale.

Sadly, and yet again, as soon as that vapour hits the taste buds it seems to surrender, wilt away and die.

Such a bloody shame because this one could be so good…still the best of the none tobacco flavoured JUUL pods I’ve tried.

I still stand by my original review that most of the JUUL pods on sale here in the UK are just short of being very tasty.

However the new Rich Tobacco flavour is a welcome arrival as the mixologists seem to have dialed it up a little – just a touch mind.

However, and given the phenomenal success of the brand globally, it’s maybe my tired old taste buds that might need a little extra concentrate.

Vapers I’ve spoken to from the USA do say there’s definitely a difference between the two countries blending, however as I haven’t tried them I can’t comment.

I may be talking out of my ample ass – but maybe we Brits prefer a more robust flavour from our vaping starter kits and vape juice?

You really can’t argue with the fact that millions of smokers across the world have managed to quit thanks to JUUL – so they must be doing something right.

If you’re a smoker looking to quit I certainly wouldn’t put you off trying them – especially as JUUL pods are readily available in Sainsbury’s – Tesco’s – corner and vape shops.

What are JUUL pods?

The are pre-filled proprietary pods for use only with the JUUL battery.

The contain a choice of 9mg and 18mg nicotine salts and are available here in the UK in 7 flavours:

How long do JUUL pods last?

It really depends on how much you vape is the short answer.

I tend to vape a lot more in the morning and have found on average I can get about a day and a half out of each pod.

However the battery is rather small and if you’re out and about you would be advised to take a fully charged spare with you.

I actually timed the battery level from fully charged to empty and with regular vaping the best I got was 2 and half hours – not good.

I can honestly say in the dozens of JUUL pods I’ve tried, I’ve never had one leak OR experienced a build up of condensation.

That’s not say they don’t leak…I’ve just never had that happen.

Where can I buy Juul pods?

JUUL pods and the JUUL full kit and/or battery are readily available here in the UK both online and off.

Sainsbury’s sell JUUL pods and kits as do Tesco’s and of course many vape and corner shops do too.

Checkout our links above and below to buy JUUL pods online from sites such as Amazon.

How much are JUUL pods?

However, if you buy direct from the JUUL store – there is a subscription service.

A minimum order of two packs per month sees the cost drop to £9.34.

JUUL Review – Is This Pod System Worth All the Fuss? Jumate Pod Refiller Review – It Refills Closed JUUL Pods So Does It Do the Job? JUUL Duel: Are There Better Alternatives to the JUUL Pod Mod?