In for review are the Lost Mary BM600 Disposable pods. 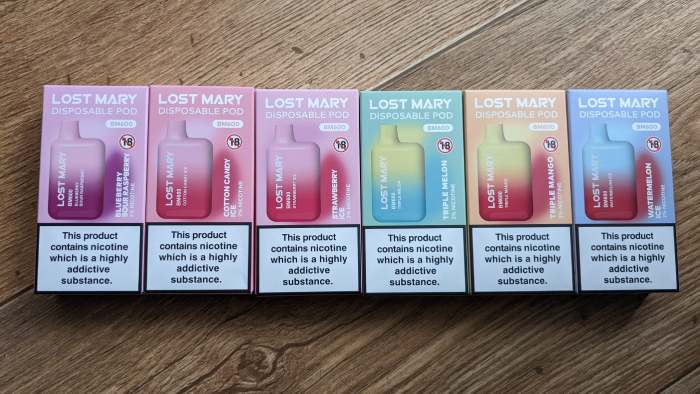 These have been designed by Elf Bar for IMiracle technology Co. Ltd, over in Shenzhen China. A quick glance at the form factor more than demonstrates their influence.

Just take a look at the Elf Bar BC1600 disposable pod and you’ll instantly notice the similarities.

We’re no stranger to Elf Bar here at Ecigclick having recently reviewed a number of products including the Elf Bar 600, T600 and CR500. I personally thought the Elf Bar FB1000 was a cracking little refillable pod kit. 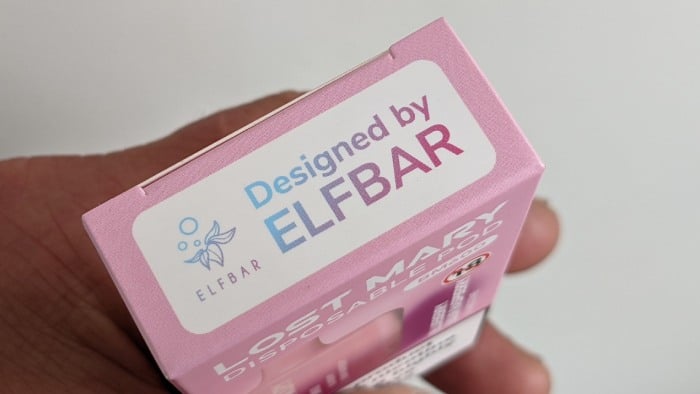 If you’re unsure which one of those to try, check out our favourite Elf Bar flavours overview.

..As usual, I digress. What’s more important is how the new Lost Mary BM600 disposables stand up for flavour, vapour production, airflow and of course how long do they actually last.

What Can We Expect From The Lost Mary BM600?

These TPD compliant pods hold 2ml of 20mg (2%) salt nicotine and are designed to last for anything up to 600 puffs powered by a 550mAh integrated battery.

Just for reference, there’s also a couple of non TPD versions floating around. The BM3500 holds 10ml of e-liquid and is capable of up to 3,500 puffs when using type C charging.

The Lost Mary is extremely compact and quite dinky. It’s also very lightweight so there’ll be no issues slipping one of these into a shirt pocket. It relies solely on its auto draw function and being a sealed pod means no messing around with refilling or even replacing coils. This makes it instantly accessible to new or experienced vaper alike.

Once the battery fails simply throw it away – responsibly, please.

The range is available in 12 fruity flavours and we can expect a few icy, cold throat blasts along the way. Today I’m reviewing six but others will follow in the not too distant future. A mixed berry flavour blend capturing sweet notes of Blueberry on the inhale that’s then followed by sour Raspberry highlights to create a tasty and satisfying vape experience throughout!

The first thing of note actually relates to the exhale and the sheer amount of sweetness on offer. It lines the tongue and leaves an impression after the vape.

During the inhale a moderate amount of cooling kicks in which isn’t, quite thankfully, overwhelming. This means it doesn’t distract from the general flavour quality which is quite good.

There’s actually a nice flavour blending created between the sourness of the Raspberry and the smoother, calming effects of the Blueberry. They work well together as a team.

The flavour holds true throughout the vape as well. However, as is often the case the abundance of artificial sweetener rules the day. Some will appreciate that, others may be put off.

It’s the sweetness, not the cooling agent that distracts from overall decent flavour quality. A confectionary blend capturing sweet and fluffy notes of Cotton Candy on the inhale that’s then followed by icy highlights to create a tasty and satisfying vape experience throughout!

Cotton Candy Ice contains a lot of sour notes and they are a running theme throughout the vape. It’s more about the sweetness being sucked up during the inhale alongside a very soothing, cooling build up.

Strawberry is of course the fruit here and it does have a definite candy like edge reminiscent of a powdered sweet. By combining this with the sweetener a candy floss taste experience is created.

There are also a few diary or creamy notes thrown into the mix which seem to contribute to the overall smoothness of the vape.

Cotton Candy Ice does a great job of replicating the fairground treat with the addition of a slight throat chill for good measure. Is it overly sweet? Yeah – but this time Lost Mary can be forgiven given the flavour description which is spot on! A berry flavour blend capturing sweet and juicy notes of summer Strawberry on the inhale that’s followed by icy highlights to create a tasty and satisfying vape experience throughout!

Strawberries and cream. That’s my overall impression of Strawberry Ice. Again it’s nice to see that the level of cooling agent has been dumbed down significantly. It doesn’t sear the throat or interrupt from what else is going on. It’s still noticeable but adds more to the refreshing value of the inhale.

This is your usual mainstream, generic tasting Strawberry so don’t expect any of the juiciness mentioned in the flavour description. I didn’t personally notice any.

Also, the sweetness kicks in very early and tramples across everything else on offer.

That’s not to say Strawberry Ice is poor. It’s not and will no doubt hold the attention of those with a sweet tooth. The flavour is bright and bold and remains on the palate after the vape is over. A mixed fruit flavour blend capturing delicious notes of honeydew Melons and Muskmelon on the inhale that’s followed by juicy Watermelon highlights to create a tasty and satisfying vape experience throughout!

A strong aroma of Watermelon wafts as soon as the vacuum sealed bag is opened, hinting at what to expect.

I have to give Lost Mary praise for treading a slightly different path with Triple Watermelon. They’ve effectively given us more of the honeydew Melon and for that I’m quite thankful.

This is no simple, generic version of the fruit and does have a couple of complexities. On the inhale it’s more about the standard, juicy Watermelon taste most of us know and love (or hate).

On the way out during the exhale this mutates into a soothing, tasty honeydew Melon with an adequate level of sweetness to quench the thirst.

There is a musky edge to the vape too and this is more evident towards the end of the exhale when the flavour begins to evaporate.

Everything blends perfectly with Triple Melon and I think this will be a sure fire summer hit for new and seasoned vapers alike. Great work! A tropical flavour blend capturing delicious flavours of Mango with juicy notes on the inhale that’s followed by sweet highlights to create a tasty and satisfying vape experience throughout!

As with Triple Watermelon, Triple Mango exudes a strong tropical aroma when prised from its vacuum sealed baggie. Unfortunately that’s about all I received as the disposable was DOA (Dead On Arrival).

Zero flavour or vapour production no matter how hard I tried. For this reason it cannot be included in the final overall scoring A cool flavour blend capturing sweet and juicy notes of Watermelons on the inhale that’s followed by icy highlights to create a tasty and satisfying but most of all refreshing vape experience throughout!

This version of Watermelon is more aromatic and fragrant during the exhale and certainly differs from Triple Watermelon with its more simplistic approach.

It’s also more juicy in content and when combined with the cooling inhale really does take on a very refreshing appeal.

There’s still an abundance of sweetener taking up lots of the flavour experience but doesn’t ruin the overall taste because the sour edge of the fruit neutralises it to an extent.

The bitterness is more noticeable during inhale while the icy coldness of the vape is building up.

Watermelon Ice is sweet, cooling, refreshing and full of fruity flavour which makes it an ideal summer accompaniment.

The Lost Mary BM600 disposable vape is a discreet little fella. It’s very easy to conceal within the hand and weighs next to nothing. The mouthpiece is also very comfortable to use despite being equally dinky.

You’re obviously not going to notice it in a shirt or trouser pocket so it’s highly portable not to mention inconspicuous.

The artificial sweetener sometimes overrides the flavours to the point of becoming sickly and cringe-worthy. For some this may be a deal breaker. However the fruits tested were all characteristically bright, lively and popping.

Cloud production is on par with cigarette smoke and doesn’t take very long to dissipate into nothingness. You’re hardly likely to cause a nuisance when vaping at a bus stop, for example.

It’s a pretty good Mouth to Lung (MTL) vape with enough airflow restriction to make it a ‘classic’ cigarette style tug in my opinion. That’s something the new vaper will fully appreciate.

I was also able to hit a very restrictive direct lung vape but that’s not really the point with disposables. Especially when vaping 20mg salt nicotine – head rush city! lol

It’s a very quiet vape too with just the faintest of coil crackle at the start of inhale. There’ll be no issues when a few stealthy vapes are called upon.

How Long Does The Lost Mary BM600 Last?

I was super impressed with how long the BM600’s 550mAh integrated battery lasted. I harvested a total of 9 hours continuous use. Basing it on the knowledge that I vape on average 70 puffs an hours I’ve no hesitation in agreeing with the 600 puffs claim.

During the last half hour of use there’s a noticeable change to flavour and vapour production. Both start to dwindle but surprisingly the sweetness and Coolada remain consistent to the very last vape.

So before there’s any chance of a dry hit the battery fails and once that happens the blue LED on the base will blink 10 times to notify.

The Lost Mary BM600 disposable will be very well suited to a new vaper because of the pick up and vape-ability factor. There’s nothing to mess about with and the auto draw works tirelessly.

Cigarette smoke replication is on par and the flavours, although highly sweet in content are likely to hold the attention of someone new to the vaping scene.

It will also appeal to a casual vaper, out for the evening. Unrestrained from the burden of heavy, cumbersome sub ohm kits and external batteries.

As with many disposable vapes on the market convenience is one of the key factors when purchasing the Lost Mary disposable pod but they do also deliver a consistent, flavoursome vape from start to finish despite those elevated levels of sweetness.

Did you buy the Lost Mary BM600? Let us know your thoughts in the comments below