The Smok Morph 2 Dual 18650 battery MOD review and although available as a standalone device, it’s also been packaged alongside the Smok TFV18 sub ohm tank as a kit.

As the name suggests this is the second mod in the series. The SMOK Morph 219 allowed a maximum of 219W (don’t ask me why 219W!) and included a large 1.9in colour screen. 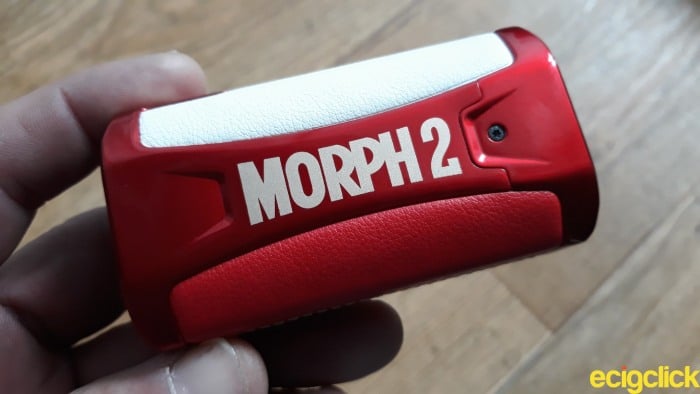 Not only that but it featured touch screen technology. Now I love that, mobile phone tech meets vaping device.. and Smok got there first it seems.

The 219 was based off the hugely successful Smok Alien and together with the Smok Species offered around the same power capabilities give or take a few watts.

So is it worth the few extra watts and how does it perform?

Let’s get some answers, shall we?

What Can We Expect From The Smok Morph 2 Mod?

Well first up don’t expect touch screen technology. What little is gained in power is lost in screen real estate. Almost an inch, in fact.

The side firing bar of the original Smok Morph has been replaced with the traditional square fire button but the 510 connector is centred. That’s going to allow for some pretty hefty atomisers to take advantage of its 230W capabilities.

The hinged battery door has been directly ported over from the original Morph but there’s very little else to suggest they are related. It’s not all about looks, I suppose. Well – that’s what the wife tells me..

Meanwhile, Smok tells us the wattage automatically adjusts to the current remaining capacity of the battery so we can expect a maintained stable output. Sounds like a bonus battery safety measure, doesn’t it?

I received the Smok Morph 2 in kit form along with the Smok TFV18 sub ohm tank so I’m assuming the following will be packaged with the standalone mod. 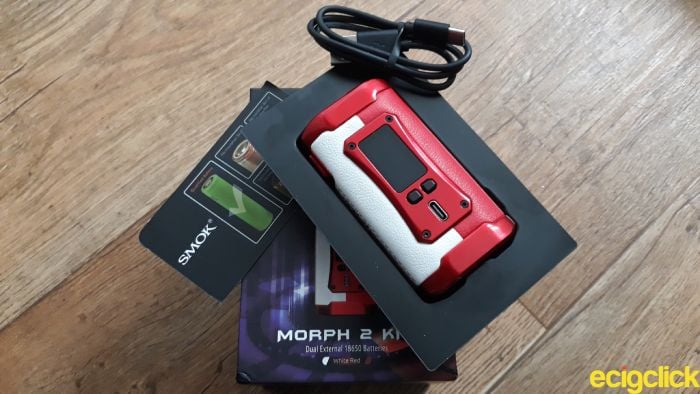 There are a couple of vaping modes available for use. Power mode, which is your basic wattage mode if you like, letting you alter the vapour and flavour intensity of the vape. 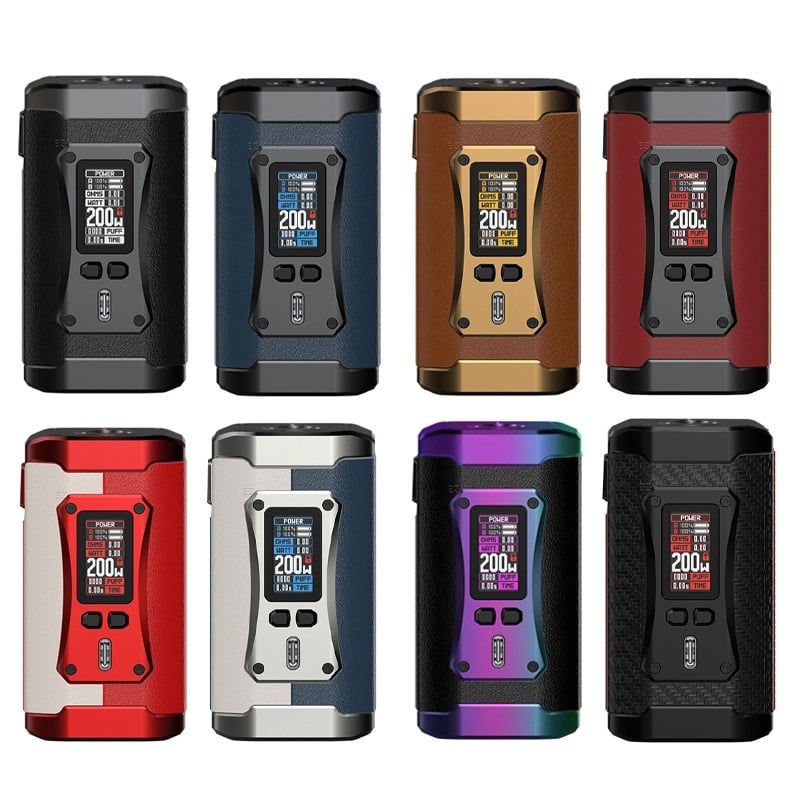 Then there’s temperature control mode catering for Nickel, Titanium and stainless steel coils if that’s your bag. It’s not mine so I won’t be diving into TC with this review.

..You can’t be too careful and this is one of the reasons I love regulated devices.

The zinc alloy body helps to keep the weight of the mod down but that’s obviously only until you shove two 18650 batteries inside, it then also becomes more substantial when held.

So how does it feel in the hand? The leather like wrapping does provide a minor degree of cushioning and side firing means it’s always easy to view the display.

While the fire button itself is clicky and responsive it’s not as noisy as I was expecting which is a bonus.

The Smok logo is embossed on one side and with a reference to the NEX chip being inside. This confuses me slightly because some sources, including Smok themselves state the IQ-S chip (found in the Morph 219) is at the heart of the device.

It seems they are both capable of the same fast firing speed. The Nex chip does also boast of delivering the full 230W of power so maybe that’s got something to do with it? The Smok Morph 2 Mod measures just 47.5mm across and this does lend more to the portable nature of this dual 18650 battery device.

The hinged battery door isn’t the easiest to use, being recessed and takes a little getting used to. That’s a bit of a subjective con to be honest because once again it’s assumed you’re not a nail biter! lol.

Catch a nail in one of the serrations and allow the hinge to do its thing and you’re fine. The positive and negative positions for each battery are clearly identified on the underside of the door and their fit is a very good one. There’s no rattling when installed and there’s not much play on the hinged door either. Good stuff.

The shape of the mod lends itself well to a centred 510 connector (spring loaded in this case) and it’s something I personally prefer. The Smok Morph 2 will accommodate power mad tanks, RDA’s and RTA’s of anything up to 30mm. 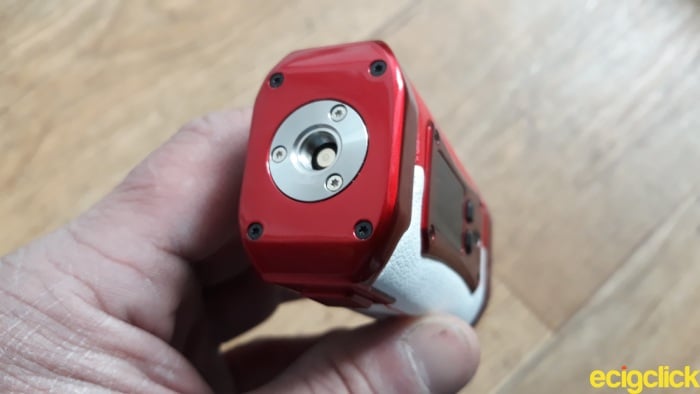 Smok describes the menu buttons as being “up” and “down” but to save any confusion I will explain things in the way the buttons are laid out. That’s to say, left and right, and sited just below the screen itself.

Everything is presented clearly and organised into boxes with the power output being particularly emphasized which is always great to see. Admittedly the font looks a bit old school Spectrum 48k style but it gets the job done. The Smok Morph 2 Mod caters for various vaping styles and coil materials. Let’s have a look at how to access them as well as other functionality.

Access them by hitting the left or right menu buttons. To make adjustments to the resistance and wattage hit the fire button a single time.

How Does The Smok Morph 2 Mod Perform?

It’s important to note that all tests were carried out in “power” mode.

I used three different tank set ups, the first of which being the Vaporesso Forz RDA.

With The Vaporesso Forz RDA

Where do I start? At one point it was suggesting 1.1ohm and to compound things it wouldn’t allow me to select the old coil value!

This resetting of values would also occur after a very short period of inactivity.

So the most worrying thing of all is that the previous wattage setting remains unaltered. Who in their right mind is going to run such “apparent” high resistance coils at 55W?

I also noticed an uneven battery drain, occurring very early on in the test.

Consequently tests using an RDA were pretty much fruitless. When I was able to fire up the response time was very impressive. There’s no escaping the fact.

There were no such issues when attaching the Wotofo Gear RTA with its single fused Clapton coil. As with the coils of the Vaporesso Forz RDA, their material is Ni80. The resistance value was bang on at 0.31ohm. The firing time is indeed very swift and the coil takes less time to respond than other twin 18650 battery mods I own, so all good stuff.

Running at 50W, the flavour is sharp and punchy from the KIK Raspberry Ripple E liquid used and cloud production is more than satisfactory. A smooth and consistent draw is achieved.

Again, battery A was discharging at a rate of 5% faster than battery B.

I used the pre built TFV 0.33ohm single mesh coil with the tank. My concerns deepened when the device refused to recognise the new set up despite the resistances being pretty close at 0.31ohm. Running at 100W the fire button was extremely feisty and fired up instantly. I didn’t notice any lag time at all. There’s plenty of clout behind the chip that’s for sure.

Now obviously running at higher wattage the battery drain was much quicker while cell A continued to drain 5% faster. With regular inspection the batteries themselves remained cool to the touch which was reassuring.

The vape experience was smooth, flavoursome with plenty of vapour production.

Most importantly I received a consistent level of power at all times.

Using the mod with the RDA was completely pointless for the reasons I’ve described above.

It could be suggested that one of the post screws was loose, a common cause of resistance jumping. Not only were these all checked but when placed onto other mods the issue ceased.

It does point to a problem with temperature and the circuit board reading the coil values differently each time cool down occurred – this would account for the random and wildly different resistances every time the mod was left for very short periods.

As for battery drain? Maybe some of that is on me because my current stock is fast approaching the stage of needing to be replaced. (I personally do this every 9 months being quite a heavy vaper).

During maintenance they are always paired or married and charged externally, something I would always recommend.

In the case of the Smok Morph 2 mod there’s every likelihood that Battery A is closest to the board in the voltage circuit thus draining slightly faster.

The resistance values of the Wotofo Gear RTA were stable and so were those of the Smok TFV18 sub ohm tank.

Whose the Smok Morph 2 Mod Aimed At?

I would love to say any intermediate to advanced vaper but that clearly isn’t the case as my tests have shown, anyway.

OK, just because a dual 18650 battery device is capable of running to 230W, that’s not really a practical outlook as far as efficiency and life span is concerned.

Yet the wattage range does scream out versatility. The choice of set up should be vast and varied.

What the tests have proved (to me at least) is that the Smok Morph 2 mod is far better suited to traditional sub ohm tanks. Let’s face it! The mod has been packaged with one in kit form..

The best vaping experience was provided using the TFV18 sub ohm tank, where  wattage and power proved to be very effective and with no issues to tackle.

So to answer the question, it’s best suited to intermediate vapers who enjoy using sub ohm tanks that crave power. It may well be a hit and miss affair when using rebuildable tanks.

In summing up the Smok Morph 2 mod.

Not quite the versatility I was hoping for.